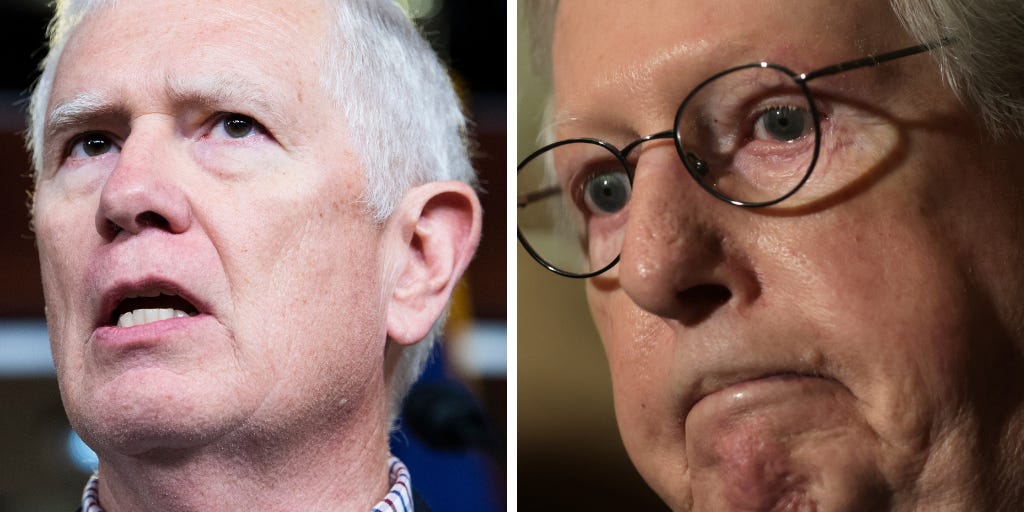 
Rep. Mo Brooks, a Trump-endorsed Senate hopeful in Alabama, has pledged to “fire” Sen. Mitch McConnell from his post as Senate GOP leader if elected.

“If elected to the Senate, I will not vote for Mitch McConnell for leader, and I will do everything in my power to ensure that Republicans choose a conservative to be leader,” said Brooks in a video uploaded to Twitter on Monday.

“America can’t afford a Senate leader who is a weak-kneed debt junkie open-border RINO Republican, and who, worse yet, sells out America for special interest group cash,” he added, referring to the pejorative “Republican in Name Only.”

Brooks also claimed in his video that McConnell had targeted him for being a “principled conservative” endorsed by former President Donald Trump. He added that McConnell is “determined to stop the MAGA movement and Donald Trump’s endorsed candidates for the US Senate.”

“That’s the battle across America. McConnell versus Trump in a war for the heart and soul of the Republican Party,” Brooks said.

In his tweet, the congressman also included a link to a pledge to “fire Mitch McConnell.” The link also gives visitors the option of donating to Brooks’ campaign.

Brook’s pledge came almost a week after the Washington Examiner published an interview with Trump in which the former president described the congressman as “disappointing.”

“I’m determining right now, has Mo Brooks — has he changed?” Trump told the outlet, citing how he had been let down by Brooks’ comments on his baseless voter fraud claims.

Brooks was booed at an Alabama event in August after calling on those “despondent” about the so-called 2020 election theft to “put that behind you.”

“I’m disappointed that he gave an inarticulate answer, and I’ll have to find out what he means,” Trump told the Examiner.