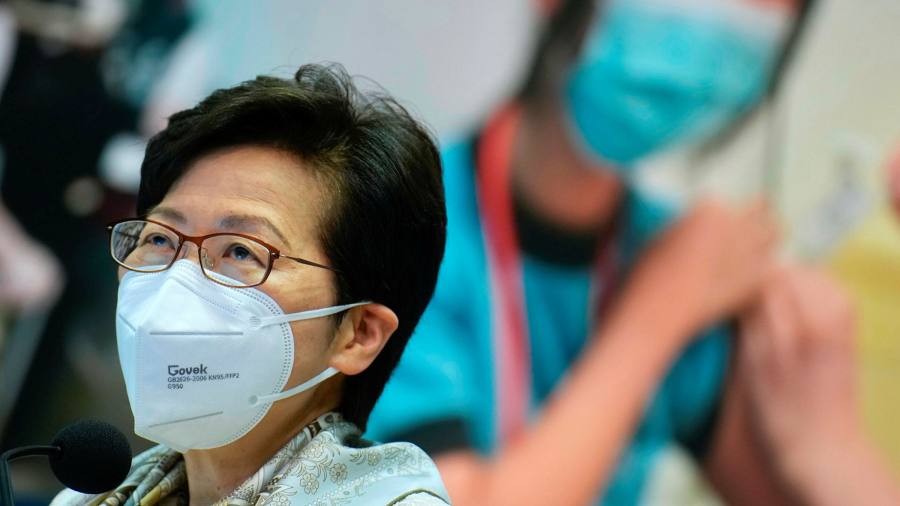 
Hong Kong has eased its rigid border controls after the restrictions put in place to control the Chinese territory’s worst coronavirus outbreak battered the economy and prompted residents to flee the city.

Carrie Lam, the city’s leader, said she would lift a flight ban from nine countries, including the US and UK, for Hong Kong residents and allow those travellers to quarantine in a hotel for seven rather than 14 days. The changes will take effect on April 1.

“Hong Kong’s isolation requirements for inbound travellers . . . could in turn adversely effect the local business environment, especially when the rest of the world has been moving towards relaxing [Covid policies],” Lam said on Monday. “There is a need for the economy to move forward.”

The decision will cheer international business, which has argued Hong Kong’s stringent controls undermined the city’s status as a global financial hub.

“The measures are the sign we have all been waiting for,” Frederik Gollob, chair of the European Chamber of Commerce in Hong Kong, said. “[But] the decision comes at an almost too late stage . . . We need to see the recovery plan to avoid further damage, as the damage has already happened big time.”

Gollob said most companies in his chamber were struggling to hang on to staff and many were considering leaving Hong Kong.

Property tycoons, bankers and academics had warned that the restrictions had caused a brain drain and damaged the city’s economy. The territory recorded a net loss of 65,295 residents last month and an additional 40,920 by mid-March.

Paul Chan, the city’s financial secretary, said on Sunday that restrictions would drive the economy back into contraction.

“Hong Kong’s economy will inevitably fall into negative growth in the first quarter of the year, with the unemployment rate further deteriorating rapidly,” he said.

Lam had previously argued that the controls were needed to convince the mainland to reopen the border but last week signalled a change of direction.

“I have a very strong feeling that people’s tolerance [is] fading,” she said. “I have a very good feel that some of our financial institutions are losing patience about this sort of isolated status of Hong Kong and Hong Kong is an international financial centre.”

“We’re back in business . . . I’ve seen it before [during the 1997 handover of Hong Kong from the UK to China] people left, then after people came roaring back, Hong Kong’s strength will always be there,” he said.

Cases are falling after the city reported more than 1mn Covid infections since the fifth wave struck in late December, with at least 5,600 fatalities, surpassing the official toll in mainland China. Beijing has also been struggling to contain the country’s biggest outbreak since Wuhan and by Sunday had recorded about 132,000 Covid infections and 4,600 deaths after reporting few infections in the first two years of the pandemic.

“[Health] experts also believe that the peak has passed and infections are on a decreasing trend,” Lam added.

As the outbreak spiralled out of control, the government suggested a citywide lockdown and mass testing of the entire population, sparking a wave of panic buying. A policy where Covid-positive children could be separated from their parents in hospitals spooked residents further.

The government said on Monday the unprecedented testing exercise would now be put on hold but “if the time is right” it could still be conducted.

Face-to-face schooling will resume in stages from April 19 and most social distancing measures will be maintained until April 20.

The 50-Day Moving Average Must Hold In The Major Indices