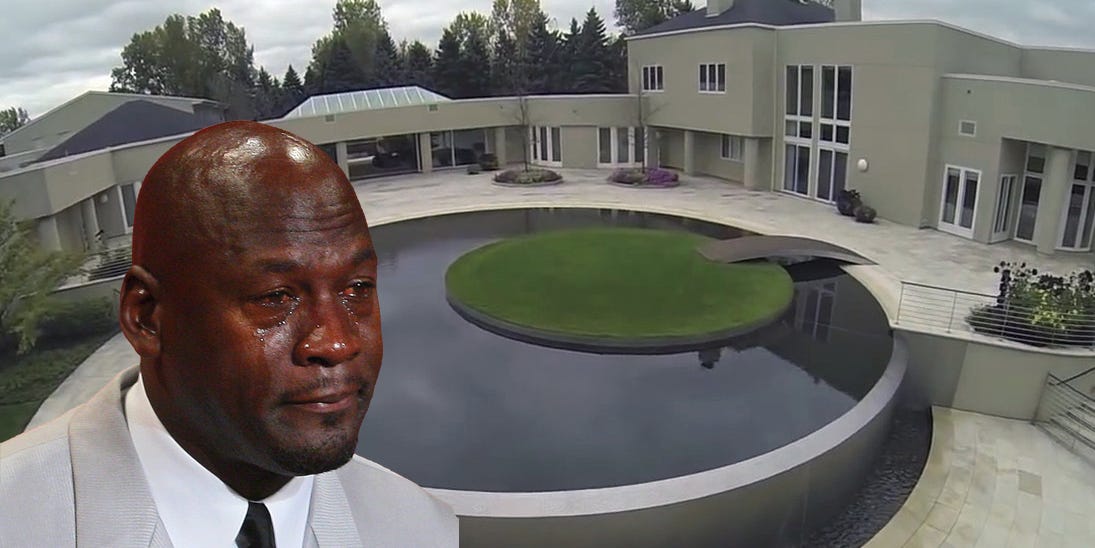 
Anyone who approaches from the ground can tell right away that this estate belongs to the legendary No. 23, Michael Jordan — and that might be what’s keeping it from selling. “It’s clearly his home,” said Bruce Bowers of Bowers Realty Group. “… There’s a lot of work that would have to be done to make it your own.”

The long drive from the gate and the full-grown trees ensure that the house has complete privacy.

Jordan had the house — and the surrounding property — built from scratch to his personal tastes.

… the inside is equally spectacular. When guests first walk in the front door, they are greeted by this view, which includes a piano in the background.

The piano room doubles as one of many sitting rooms in the house.

And here’s a look at another sitting area dubbed the “great room” — this isn’t the only great room around the house, though.

Jordan’s luxurious taste even shows itself in details like doorways. The set of doors seen below are from the original Playboy Mansion in Chicago.

They lead to a game room with a pool table.

Of course, since this is the former home of Michael Jordan, there is a full-court basketball court. It’s the centerpiece of the house.

The court has the legend’s name at both ends …

… and the Jumpman logo at center court, which includes the names of his children — his daughter’s name is out of view.

While guests wait for their turn on the court, they can hang out in this sitting area.

Moving along to the dining room, guests were able to eat at this “Baghdad table.”

Detailed eating areas are somewhat of a theme. Here we can see a beautiful skylight positioned perfectly over the kitchen table.

In one of the dining areas just off the kitchen, there is a large aquarium built into the wall.

There is also a cigar room, which has been decorated intricately with a detailed ceiling.

The cigar room also has plenty of card tables where we’re guessing Jordan played some high-stakes poker games — he is known for his love of gambling, after all.

Another luxurious part of Jordan’s estate is the expansive wine cellar.

The library upstairs was said to be MJ’s favorite room. It features a drop-down movie screen.

Between the house and the patio, there’s another TV room with a 110-inch screen.

This area used to be an indoor pool. Jordan renovated it after he moved in and added sliding walls to both sides that can make the gathering room either indoor or outdoor depending on the mood and the weather.

MJ himself lived in the main house for 19 years.

The house comes fully furnished, although some of the pieces may be a tad dated.

Despite how awesome the house seems, it’s been on the market since 2012. Jordan tried to auction the house in 2013, but the minimum bid of $13 million was never met.

Jordan said, “Many of the world’s most desirable items are sold at auction, and Concierge Auctions is the hands-down leader when it comes to auctioning one-of-a-kind real estate.”

MJ’s estate remained unsold despite attempts to get creative, including marketing to wealthy people in basketball-crazed China.

In 2015, the agent working to sell the house at the time promised that the buyer would also receive every edition of Air Jordans in his or her size — but that didn’t work either.

Adam Rosenfeld, of the luxury-real-estate startup Mercer Vine, told Marketwatch in 2016 that Jordan was likely struggling to sell the house because of all of the personalized customizations.

Rosenfeld said the house also just isn’t in an area where wealthy celebs are looking for houses. Gail Lissner of Integra Realty Resources called the area “much more modest” than what Jordan’s property suggests.

There is no need to worry about the house rotting while remaining unsold, though. The house is still occupied by staff who Jordan employed to keep it looking fresh.

One problem is that Jordan may feel his celebrity status adds value to the house, but, according to Stephen Shapiro of the Westside Agency, people do not pay more for a house just because somebody famous owned it.