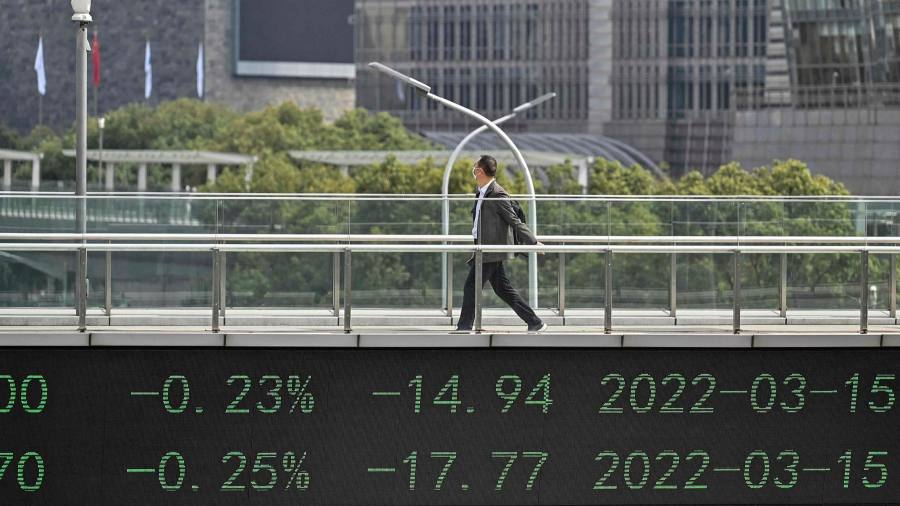 
Foreign investors have dumped a record $6bn worth of Chinese shares in the first three months of 2022 as they take fright at new coronavirus outbreaks and the risk that western countries will sanction Beijing if it supports Russia’s war in Ukraine.

Chinese shares took a heavy blow at the start of this week as Covid-19 cases surged in major cities like Shanghai and Shenzhen, extending declines that have proven persistent in the year so far.

Local investments have edged back up after Beijing signalled it would take a suite of market-friendly measures. But foreign holdings of stocks listed in mainland China have not.

That divergence, investors and fund managers say, reflects a host of concerns that have battered valuations even of companies that led the China stocks rally of 2020, when the market posted world-beating gains on the back of Beijing’s early success with its strict “zero-Covid” policy.

“For the last two weeks, Chinese equities have been in a perfect storm,” said Pruksa Iamthongthong, senior investment director for Asian equities at fund management giant Abrdn. She added global investor confidence in Chinese stocks “is so low that some of this volatility will continue”.

Pat Lu, a Hong Kong-based portfolio manager for Neuberger Berman who specialises in emerging markets, added that “when we are broadly fearful of the markets, we are skewed to look for risk and that is what is happening”.

Chinese equities have lagged all year. The benchmark CSI 300 index is just 4 per cent above where it stood at the end of 2019, when the first Covid-19 outbreaks were reported in China. The Nasdaq Golden Dragons index of large Chinese tech groups listed in New York has dropped by about a quarter.

By comparison, over that same period the US’s S&P 500 and tech-focused Nasdaq Composite have risen roughly 37 and 52 per cent, respectively.

By Friday’s close, net sales by offshore investors this year totalled almost Rmb40bn ($6bn), on track to mark the worst quarter since that link-up scheme began in 2014. The sell-off marks a sharp contrast from 2021, when net inflows through the scheme topped Rmb430bn.

Investors pointed to three main drivers of foreign sales: renewed concerns over potential delistings for Chinese shares trading in New York, the surge of Covid-19 cases in major mainland cities including Shanghai and Shenzhen, and concerns over the possibility of China providing support to Russia in its invasion of Ukraine.

On Tuesday, after China stocks notched their second day of double-digit falls, JPMorgan downgraded 28 of the 29 China internet stocks it covers to underweight or neutral. “We recommend investors avoid China internet on a six- to 12-month view,” the analysts wrote, describing the sector as “unattractive, with no valuation support in the near term”.

An executive at the Hong Kong arm of one global hedge fund said the start of the week “felt like 2015”, when the leverage-fuelled stock bubble popped seven years ago.

But on Tuesday, Liu He, a vice-premier and President Xi Jinping’s closest economic adviser, announced the government would take measures to “boost the economy in the first quarter” and introduce “policies that are favourable to the market”.

State media immediately backed up He’s message with reports on talking points from a special meeting of China’s financial stability committee he had just chaired, which included a call to “quickly complete rectification of China’s big tech platforms” and a move to scrap regional test-runs for property taxes that had weighed heavily on property developers.

“The message is very clear: the Chinese government wants to send a strong signal of market support,” said Jessica Tea, investment specialist for Greater China and Asia Pacific equities at BNP Paribas Asset Management. “It seems like they are pausing regulatory tightening to provide more support and shore up market confidence.”

The slew of market-friendly promises from Beijing was swiftly followed by some global investment banks moving to upgrade Chinese stocks.

Credit Suisse announced on Thursday it was raising its allocation to Chinese equities to overweight as Michael Strobaek, the bank’s global chief investment officer, flagged Beijing’s move as “significant”.

Strategists at Citigroup also upgraded China equities to overweight on Thursday, saying that if authorities delivered on their pledges “it would remove almost all of the overhangs over Chinese equities that the market had been concerned about”.

But both banks framed their intent to buy more shares as “tactical” — typically an indication that buying will be limited or will target specific stocks, rather than increase exposure to China’s market as a whole.

Analysts also warned that after so much pain for Chinese stocks during the past 12 months, it would take time and concrete action to regain the confidence of global investors who had been burnt repeatedly.

Thomas Gatley, an analyst with Beijing-based consultancy Gavekal Dragonomics, said the committee’s statement was “couched in terms that were so positive that if they don’t deliver over the course of the next month . . . we’ll see another drop in markets”.

Gatley added that like many pledges from top officials, the statement was carefully worded to provide plausible deniability if Beijing’s priorities suddenly shifted or regulators pushed ahead with disruptive enforcement measures that were already in train.

“That [approach] works pretty well for macroeconomic policy in general and governance of a large, diverse country,” he said. “But it’s not so great for market signalling.”