Last week, while most traders, investors and market pundits were doing Chicken Littles and selling doom and gloom stories, I used objective analyses of charts and data to conclude a rally– -and not a crash – was the most likely scenario. See . Namely, I found the :

Providing all these facts told me the weight of the evidence was pointing toward higher prices, not lower, and that a rally to SPX 4600+ would be in order.

One week later, the index is already trading at SPX 4400, as it broke out of the wedge yesterday. Once again: objective analyses 1, emotions and opinions 0. 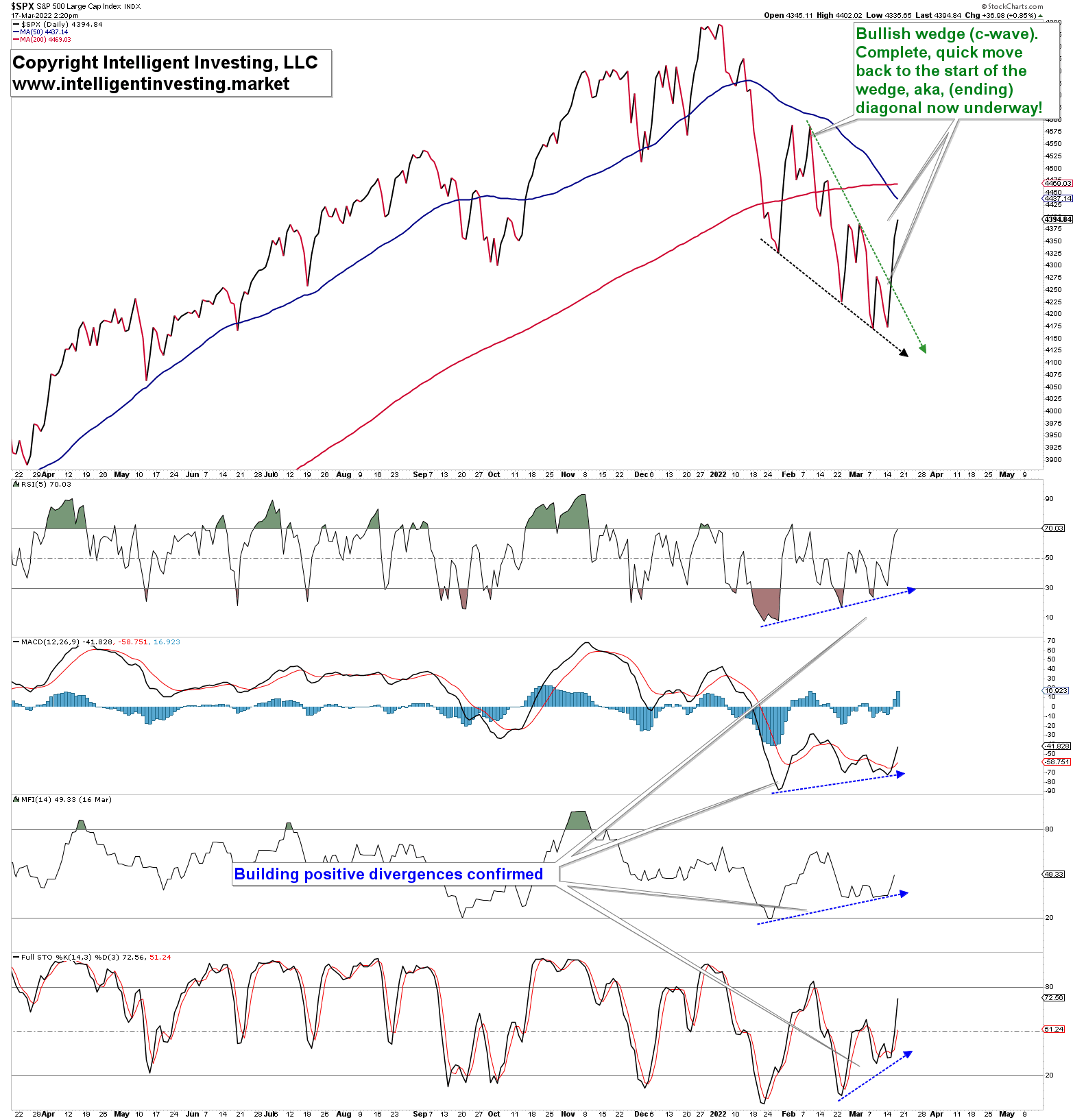 The 50- and 200-day Simple Moving Averages (SMAs) at SPX 4437 and SPX 4470, respectively, should provide some resistance, but based on my Elliott Wave Principle (EWP) work, I expect the stock markets to have put in a lasting bottom, and that a subdividing five-wave rally to SPX 5500-6000 is now under way. Namely, the Feb. 24 low was for the SPX a fourth wave low, and now wave-5 is under way. Based on current data available, I anticipate the first wave of wave-5 to top out at around SPX 4600. The second wave should be a multi-day few hundred points correction before wave-iii of 5 targets, ideally, SPX 5100+/-100.

Bottom Line: Last week, when the S&P 500 was trading at around 4200, I found the index was exhibiting a bullish pattern, called a falling wedge or an ending diagonal C-wave in EWP terms. This pattern projected a move to SPX 4600+. Four trading days later, the SPX is trading at 4400, an almost 5% gain, whereas nearly everybody had jumped on the bearish bandwagon. I, therefore, still expect the index to top out at 4600+/-100, a pullback to around 4400+/-100, and then a rally to SPX5100+/-100. The devil remains in the exact details, but I am not too concerned about those. I prefer to focus on the forest and not the trees. Ultimately, the melt-up to SPX 5500-6000 should be under way as anticipated.

Japan stocks to dip ahead of Bank of Japan rate decision; Biden and Xi set to speak

FirstFT: US pours cold water on hopes of diplomatic solution to Ukraine crisis