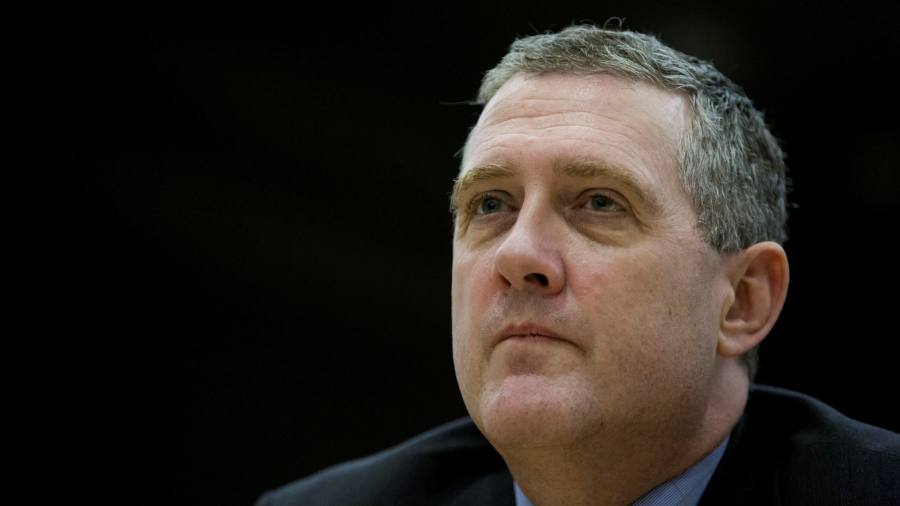 
A top Federal Reserve official has called for the US central bank to raise its benchmark interest rate above 3 per cent this year, arguing that policymakers need to move quickly to combat inflation and avoid “losing credibility”.

James Bullard, president of the St Louis branch was the lone dissenter at the Fed’s meeting this week, when the central bank raised rates for the first time since 2018 in what officials signalled would be the start of a series of increases at all of the remaining six meetings this year. At that pace, the fed funds rate would rise to 1.9 per cent.

In a statement released on Friday, Bullard, a voting member of the policy-setting Federal Open Market Committee, said a half-point rate rise — a tool that has not been used since 2000 — would have been “more appropriate” than the Fed’s quarter-point increase, given the strength of the labour market and broader economy, as well as the “excessive” level of inflation. At 5.2 per cent, the Fed’s preferred core personal consumption expenditures index is well above the central bank’s 2 per cent target.

“In my judgment, given this constellation of macroeconomic data, a 50-basis-point upward adjustment to the policy rate would have been a better decision for this meeting,” he said.

Christopher Waller, a Fed governor, said in an interview with CNBC on Friday that though data were “screaming” for a half-point move this week, geopolitical tensions justified proceeding with “caution”.

However, he backed a “front-loading” of interest rate increases this year, which he said implied half-point rate rises “at one or multiple meetings in the near future”.

“It’s better to have a strategy of ‘just do it’ on the rate hikes rather than ‘just promises’,” said Waller, adding that he would like the policy rate above a range of 2 to 2.25 per cent by the end of the year.

Bullard noted that US monetary policy had been “unwittingly easing”, as rising price pressures have pushed short-term “real” or inflation-adjusted rates lower and kept them well into negative territory. At these levels, rates remain highly stimulative, spurring borrowing and the very demand the Fed is seeking to dampen.

“The combination of strong real economic performance and unexpectedly high inflation means that the Committee’s policy rate is currently far too low to prudently manage the US macroeconomic situation,” he said. “The Committee will have to move quickly to address this situation or risk losing credibility on its inflation target.”

A bulk of the 16 policymakers who pencilled in their forecasts on Wednesday did express support for more aggressive action, with seven projecting rates to rise above 2 per cent in 2022. That would require at least one half-point adjustment.

Most officials saw rates rising to 2.8 per cent in 2023, slightly higher than the level a majority of policymakers believe will neither hasten nor hold up growth, known as the neutral rate, which they pegged at 2.4 per cent.

Jay Powell, the Fed chair, kept the door open to half-point adjustments and lifting rates above neutral, in his bid to prove the committee is “acutely aware of the need to return the economy to price stability and determined to use our tools to do exactly that”.

Bullard on Friday said he also favoured the central bank implementing a plan this week to begin reducing the size of its $9tn balance sheet, a process Powell signalled would be finalised in May.

Waller wants “run-off” or the process by which the Fed ceases to reinvest maturing securities to begin before the July policy meeting, and move far faster than the previous effort in 2017. “We’re in a position where we can actually draw down a large volume of liquidity out of the system without really doing much damage,” he said.

He also pushed back on concerns the Fed could soon cause a recession with its plans to tighten monetary policy, echoing Powell’s comments at a post-meeting press conference that the economy is robust enough to withstand higher interest rates.