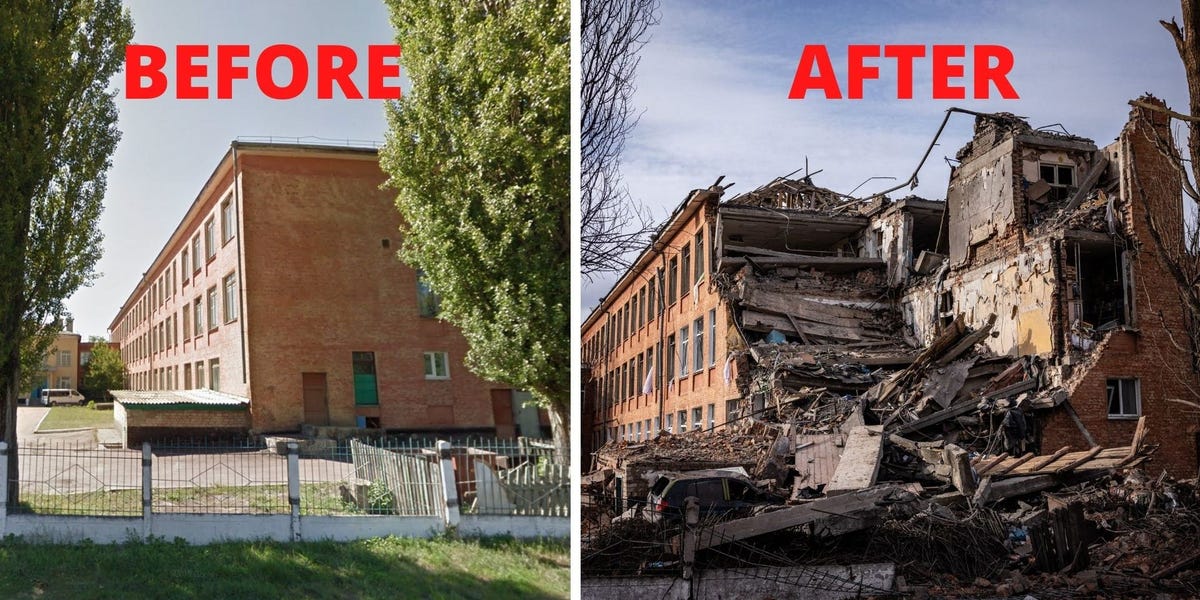 Before and After Photos Show the Scale of Destruction in Ukraine


Kharkiv: This is what Kharkiv, a city of 1.4 million people, looked like in 2014. Kharkiv, Ukraine’s second-largest city, is located in the northeastern part of the country.

Although Kharkiv has experienced periods of sporadic pro-Russian unrest since March 2014, there had been minimal damage to city infrastructure before the war.

The photo above shows Sumskaya street in Kharkiv on a bustling night, with its classical buildings intact and stores open for business.

The photo below shows a street in Kharkiv in ruins on March 7.

At least 500 people have been killed in Kharkiv since the start of the Russian invasion on February 24, according to the regional emergency service, reported Al Jazeera. More than 600 buildings have been destroyed, said Mayor Ihor Terekhov in a televised interview on March 15.

The city has been under constant shelling, with experts saying troops are deliberately targeting residential buildings.

“I have never seen Kharkiv so empty, silent, and dark. After days of bombardment, the historical city centre looks like a scene from WWII,” said Maria Avdeeva, a Kharkiv resident and research director at the European Expert Association.

A railway bridge in Irpin has become a site of destruction and death under Russia’s attack.

Air strikes have damaged many of Irpin’s residential buildings, roads, and bridges.

A key bridge in the city was destroyed (pictured above), so residents were forced to walk around the structure in a single-file, with some holding white flags, reported The Washington Post.

Those who decided not to leave, many of whom belonged to Ukraine’s Territorial Defence Forces, stayed in underground shelters and ditches.

Russian air strikes against Chernihiv in March left much of the city destroyed. The photo below shows the same school on Sjerykova Street, severely damaged.

The city was bombarded by Russian forces, with many strikes hitting residential areas.

Cultural sites like museums were also destroyed. A video dated March 3 shows shelling in a residential area where a school and children’s hospital was located. Another clip that circulated on Telegram and Twitter on March 16 shows at least 10 Chernihiv residents, who were lining up for bread, killed by Russian forces.

“Today, Russian forces shot and killed 10 people standing in line for bread in Chernihiv,” The US Embassy in Kyiv said in a Twitter post on March 16.

“Such horrific attacks must stop. We are considering all available options to ensure accountability for any atrocity crimes in Ukraine,” the embassy added.

Kyiv: In Sviatoshynskyi District in Kyiv, high-rise residential buildings line the streets. More than 340,000 people live in the district.

Residents have said Sviatoshynskyi district is a tightknit community with a garden, stores, and cafes. The district also has a handful of schools and metro stations.

Mariupol has been under siege by Russian forces since February 24. The photo below shows a pregnant woman being carried by emergency workers after the city’s maternity ward was bombed.

On March 9, Russia bombed a children’s hospital and maternity ward in Mariupol. The city was hit with a series of blasts that shook the ground more than a mile away, according to Al Jazeera.

The wounded pregnant woman photographed by the Associated Press (pictured above) died from her injuries. Her unborn baby also died, the wire agency reported.

Dead bodies have been piled up in mass graves in the city, reported the AP.

As of March 15, the UN High Commissioner for Human Rights has recorded 691 confirmed deaths and 1,143 wounded, but officials have said the death toll is likely much higher.

Cash is king in uncertain times