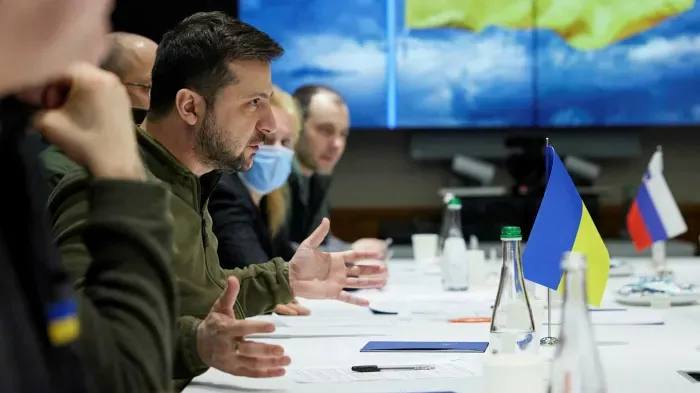 
Hopes for a breakthrough in talks to end the three-week war in Ukraine rose today after Volodymyr Zelensky said negotiations with Russia were beginning to “sound more realistic”.

Ukraine’s president gave no details of how Kyiv and Moscow’s negotiating positions had changed and said talks with Russia were “difficult”. But Zelensky and his aides have increasingly played down Ukraine’s prospects of joining Nato, signalling alternative “security guarantees” may be a more pragmatic option.

Moscow has called for Kyiv to formally renounce its aspiration to join Nato, which is included in Ukraine’s constitution, and to recognise the independence of two pro-Russian separatist statelets in the country’s east and Russian sovereignty over Crimea, which it seized in 2014.

Sergei Lavrov, Russia’s foreign minister, welcomed what he called a “realistic assessment of what is happening” by Ukraine’s president in an interview with the RBC news channel on Wednesday.

Lavrov said that Russia and Ukraine were discussing “specific wordings that are close to being agreed” at the talks, including security guarantees for Moscow and neutrality for Kyiv.

Global equity markets rallied on signs that the talks between Russian and Ukrainian negotiators were beginning to yield results after three weeks of fighting.

Follow our live blog and updated maps for the latest on the conflict. Send your feedback on this newsletter to firstft@ft.com. Now for the rest of today’s news — Gordon

1. Raskin withdraws nomination for top Fed watchdog role Joe Biden’s pick to lead financial regulation at the Federal Reserve withdrew her nomination yesterday. In a letter to the US president Sarah Bloom Raskin blamed “relentless attacks by special interests” for her decision.

2. US unprepared for rise in Covid-19 cases The US is running out of money to pay for Covid-19 vaccines, tests and treatments and will be unprepared for any future rise in cases, the White House warned. Infection rates are rising in Europe and many experts expect a similar wave in the US soon.

3. Delta Air Lines to raise ticket prices Ed Bastian, Delta chief executive, said higher ticket prices await flyers as a result of the rising cost of oil. Speaking to the Financial Times, the head of the third-largest US carrier said passengers on international flights face a fuel surcharge “as the market conditions permit”.

4. Ethereum co-founder hits out at fast-growing rival Solana Joseph Lubin questioned the sustainability of rival projects, including the fast-growing Solana blockchain, as venture capital pours into a number of new cryptocurrency networks. Solana needs to “figure out a more sustainable business model for the network”, Lubin said in an FT interview.

Nato defence meeting Ministers of the military alliance gather in Brussels for their first face-to-face meeting since the war in Ukraine began. Sign up for Valentina Pop’s Europe Express newsletter for the latest from the continent.

Zelensky addresses US congress Ukraine’s president will speak at a rare joint session of Congress via a video link in a bid to solicit more military help from the US as his country fights the Russian invasion.

Boris Johnson travels to the Middle East Britain’s prime minister will be in Saudi Arabia and the United Arab Emirates to urge the oil-producing nations to release more crude and stabilise international energy markets disrupted by Russia’s invasion of Ukraine. Meanwhile, US oilfield services companies such as Schlumberger, Baker Hughes, and Halliburton are staying in Russia.

Federal Reserve interest rate decision The US central bank is set to raise rates for the first time since 2018. But it faces a dilemma over how aggressively to tighten monetary policy as war in Ukraine threatens to dent growth and worsen the highest inflation in 40 years. Brazil’s central bank is also expected to raise its benchmark Selic lending rate to rein in surging inflation in Latin America’s largest economy.

What else we’re reading, watching and listening to

Volkswagen and China The German automaker’s decision to suspend production and sales in Russia was not excessively painful. But what if there was pressure to withdraw from China, which accounts for half of its profits and has signalled support for Moscow’s invasion of Ukraine?

1MDB trial testimony shines light on fraud Testimony in the long-awaited trial of ex-Goldman banker Roger Ng has provided a unique window into one of the key players in an embezzlement scheme that US officials have labelled “kleptocracy at its worst”.

What Japanese car auctions mean for the global economy Japan’s used car exports should be seen as the thermometer of the world economy, said Sanshiro Fukao, a senior research fellow at the Itochu Research Institute. Since late February, the abrupt slowdown of shipments to Russia has caused everyone to rip up the old calculations.

Will older investors ever embrace crypto? Wealthy millennials favour cryptocurrencies, while few of their older peers hold any at all. This is beginning to change as established institutions offer more access to digital currencies. But they are having to overcome concerns about security and money laundering.

How influential are influencers at work? A new generation of young professionals are becoming online stars in their own right through their social media channels. But what happens when personal brands meet the old-fashioned big corporate workplace?