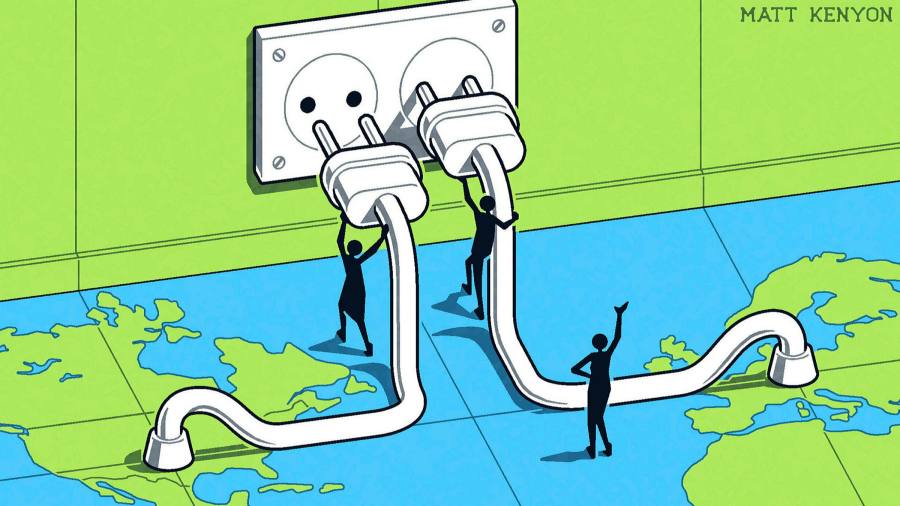 We need a grand bargain on energy


Prompted by the chaos of war in Ukraine, Europe realises it needs more friendly sources of energy, and fast. Across the Atlantic, President Joe Biden needs to be able to push back against conservatives who claim that he is to blame for inflation. It is in the interests of both America and the EU to come together on economic security and competitiveness in a more polarised world.

This calls not only for a smarter, safer energy sourcing plan, but also a clear pathway to carbon neutrality and investment in the most strategic clean technologies — which will also drive 21st-century jobs and growth.

Within this crisis, there is opportunity: namely, the possibility of an US-EU grand bargain on energy security and climate change. It should not be missed.

Start with the most immediate problem, which is Europe’s dependency on Russian oil and gas. The EU has finally — and wisely — understood that there’s no going back to reliance on Russian energy. It is speeding up its own transition to fossil fuel alternatives. But, for the next few years, there’s no getting around the fact that it will need some fossil fuels to bridge the gap. Can more come from the US?

The White House hopes so. At the CERAWeek energy conference a few days ago, US energy secretary Jennifer Granholm told oil executives (albeit not in so many words) to “drill, baby, drill”. As she put it, the country is now “on a war footing” and the industry should be “producing more right now, where and if you can”. She also said the administration would ease up on issuing permits for new pipelines, something Big Oil has pushed for.

This is obviously a huge U-turn for the president, who built his campaign around green energy transition. But even Democrats are coming around to the idea that the war in Ukraine and the global fallout are more important than environmental lines in the sand, or at least in the short term.

Republicans are already blaming Biden’s past restrictions on new fossil fuel drilling for skyrocketing gas prices, which could hurt Democrats badly in the midterm elections in November. Now, with the White House telling the industry to produce more, it has to hope that progressives on the left won’t scupper any new legislation that would help it do so.

Investors are another challenge. Wall Street has until recently been down on the energy sector, which goes through regular capital expenditure boom and bust cycles depending on the price of oil. The last production and exploration effort resulted in a fair bit of exploding debt that rattled markets a few years back.

This, coupled with the inevitable move towards clean tech, has made producers more inclined to favour dividend payments and buybacks than to drill. According to Global Energy Monitor, $244bn worth of US liquefied natural gas projects are stalled because they are “struggling to find financiers and buyers”. Investors aren’t interested in part because fossil fuels are on the way out.

That attitude is now under attack as unpatriotic. “I hope that investors are listening,” said Granholm. “We can’t have one element holding back the world.” But even if the administration creates a friendlier environment for fossil fuels, production takes time.

While Europeans are reluctant to accept the dirtiest fuels like coal or shale, they would love to buy more US liquefied natural gas, which is poised for a jump in supply by 2024. Germany has already committed to building more terminals to receive imported gas. In an ideal world, American business and the White House could co-operate to put more workers in fossil fuel-producing states in jobs upping refinery capacity.

Of course, the short-term crisis must not derail the overall goal of shifting to clean energy, which is where the jobs and innovation of the future lie. But that requires the US and Europe to be on the same page about metrics: how to measure greenhouse gases; how to set a market price on carbon. Without an understanding of where the floor is, the transition to net zero won’t happen.

As contentious as these issues have been, there’s actually already a process in place for such transatlantic harmonisation to happen. As part of the deal on Section 232 trade tariffs reached by the US and EU last October, there is a “global arrangement” provision that stipulates that the two sides have to agree to a shared way forward on dealing with carbon intensity within 12-18 months from the deal signing.

In such negotiations, Europe needs to stay flexible. It may not be possible to thrash out a shared carbon price immediately, but the two sides could at least agree on a single methodology for greenhouse gas measurement. The US and EU could make shared renewable research and development commitments. They could even come together on an industrial strategy for green batteries (lest this area be ceded to China). There should also be a plan for how ultimately to move American fossil fuel workers making $50 into good jobs in clean tech, and not into those paying half what they already make (European companies sometimes outsource such jobs to the US because its cheaper).

It’s a lot to tackle. But thinking big is the only way to get us through this crisis while not sacrificing the future of the planet.

1 Stock To Buy, 1 To Dump When Markets Open: DraftKings, FedEx

Bitcoin The Open Money And Its Enemy