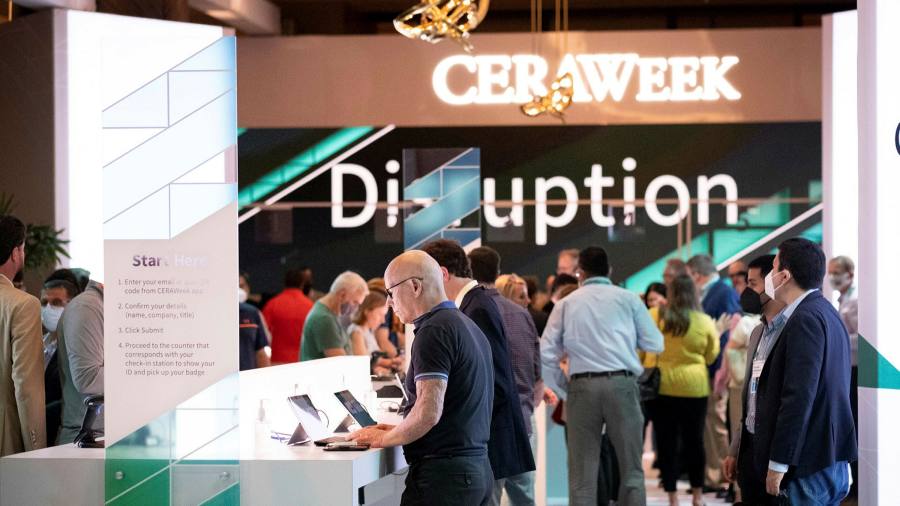 
The oil industry came to talk about carbon capture and hydrogen, tout net zero emissions pledges and beat up on Joe Biden.

A war in Ukraine, sanctions on Russian crude and the biggest oil spike in years intervened.

With its unparalleled line-up of big-name speakers, Houston’s CERAWeek conference, now run by its new parent S&P Global, has long been the banner event on the oil industry calendar. This week 6,000 delegates met in person for the first time since 2019.

The proceedings opened with John Kerry, the US president’s climate envoy, imploring the delegates not to lose sight of the climate fight. They ended with Joe Manchin, the Democratic senator from West Virginia who helped block Biden’s climate agenda, calling for the US to wield its “weapon” of “energy independence”.

In between, the price of crude oil hit 14-year highs and global geopolitics swirled as US and EU leaders announced new efforts to weaken Russia’s energy-funded power as punishment for its invasion of Ukraine.

“We could not be having this conversation at a more intense, troubling, shocking time in world history,” Jennifer Granholm, US secretary of energy, said from the stage, “with enormous consequences for the future of energy”.

Her words left some industry executives who have felt maligned during the onset of a global energy transition again feeling at the centre of epochal events. And they were ready to enjoy the fact.

After two years of pandemic gloom and virtual speeches, delegates were itching to gossip, press the flesh and down jumbo shrimp in the halls of the Hilton Americas. With oil hitting almost $140 a barrel just hours before the conference opened, few were double-checking the prices of cocktails at the lobby bar.

From the dais, speakers deplored Moscow’s invasion. In private, some talked of the opportunities created by the US’s newly imposed ban on Russian oil and the EU’s decision to slash Russian gas imports, which they believed had restored fossil fuels to the heart of debates about energy security.

Largely unmentioned were Russian oil leaders, such as the now-sanctioned Rosneft boss Igor Sechin, who once graced the podium. Shell, BP, ExxonMobil, and others that spent years courting Vladimir Putin, Russia’s president, and his oligarchs avoided questions about their withdrawal from Russia. Saudi Arabia, under pressure from the US to pump more oil, was a late no-show.

Still, CERAWeek arrived with impeccable timing to play host to an emerging pivot on energy by the Biden administration.

In Monday’s first session, Kerry sat down with Daniel Yergin, IHS Markit’s Pulitzer-prize winning author and vice-chair, with a clear message: don’t let an oil shock or invasion of Ukraine distract anyone from the climate fight.

By Wednesday, Granholm delivered a different message for America’s fossil fuel barons. “We are on a war footing — an emergency,” she told a packed chamber. “That means you producing more right now, where and if you can.”

For industry executives who had felt shunned by an administration promising a “transition from oil”, it felt like a breakthrough.

“Two weeks or three weeks ago, I think there wasn’t much conversation going on with our administration and our industry,” said Ryan Lance, chief executive of ConocoPhillips. “But I think that has ramped up as this whole conversation around national security and energy security is clearly moving to the forefront.”

Sessions on batteries, electric vehicles and hydrogen also drew standing-only crowds, though one cleantech executive said attendees felt that they needed to preface their comments with bromides about Ukraine and energy security.

If anyone saw the administration’s pivot coming it was a group of young activists who carried an effigy of Kerry outside the hotel, depicting him as just another man in a suit ignoring the climate crisis.

“We are here today to demand that our government end fossil fuel subsidies and end fossil fuel expansion,” said one high-school protester. They spoke of a “loveable future” for Houston as a clean energy capital. Delegates scurried past nervously.

Inside the hotel they cast blame for the recent spike in petrol prices. Oil executives said the White House was not supportive enough. Biden officials said there was nothing stopping drillers from drilling. Both agreed on another guilty party: Wall Street.

Scott Sheffield, chief executive of Pioneer Natural Resources, the shale patch’s biggest oil producer, said in an interview that his shareholders wouldn’t let him spend more. Were any of them willing to budge at $120 crude? “None. Not at all,” he said.

“They should call their financiers and tell them there’s a war going on,” he said of the shale producers. “The American public is paying the price.”

Investors bristled. “The industry is still repenting for its sins of the past,” said Mark Viviano, a partner at Kimmeridge Energy Management. “To turn on a dime . . . and say ‘in reaction to higher prices, we’re going to increase spending’, that’s everything that’s been detrimental for this industry.”

So who could step in? Delegates talked of further tapping emergency stockpiles. Sheffield said Biden needed to mend fences with the Saudis. The ambassador from the United Arab Emirates tweeted about increasing Opec supply more quickly; his country’s energy minister tweeted a correction. Delegates watched oil prices react on their phones.

The delegation from Alberta, exuding hurt that the US should be turning to other foreign suppliers when Canada’s producers had all the friendly oil America could need, seized their moment.

If Biden had not vetoed the Keystone XL pipeline from Canada, Alberta’s premier Jason Kenney noted in one of the week’s many “we told you so” moments, it could have been pumping crude to the US later this year.

The administration could still approve the pipeline and its “democratic energy”, Kenney said, instead of going “cap in hand” to the Venezuelan, Saudi and Iranian regimes for more oil.

American natural gas and pipeline companies made a similar pitch, calling on the Biden administration to loosen environmental rules so that they could build new infrastructure to boost US energy exports to Europe.

“The issue is permitting,” said Alan Armstrong, chief executive of the Williams pipeline group. Others echoed his complaint about onerous federal rules.

The Biden administration seemed to be listening. “Permitting is on the table,” said Granholm, discussing with Yergin how the administration would support new fossil fuel development. It prompted the loudest applause of the day.

“I do worry that there is a risk that we lose sight of the climate imperative,” said Harvard University professor Meghan O’Sullivan, in a panel discussion that followed.