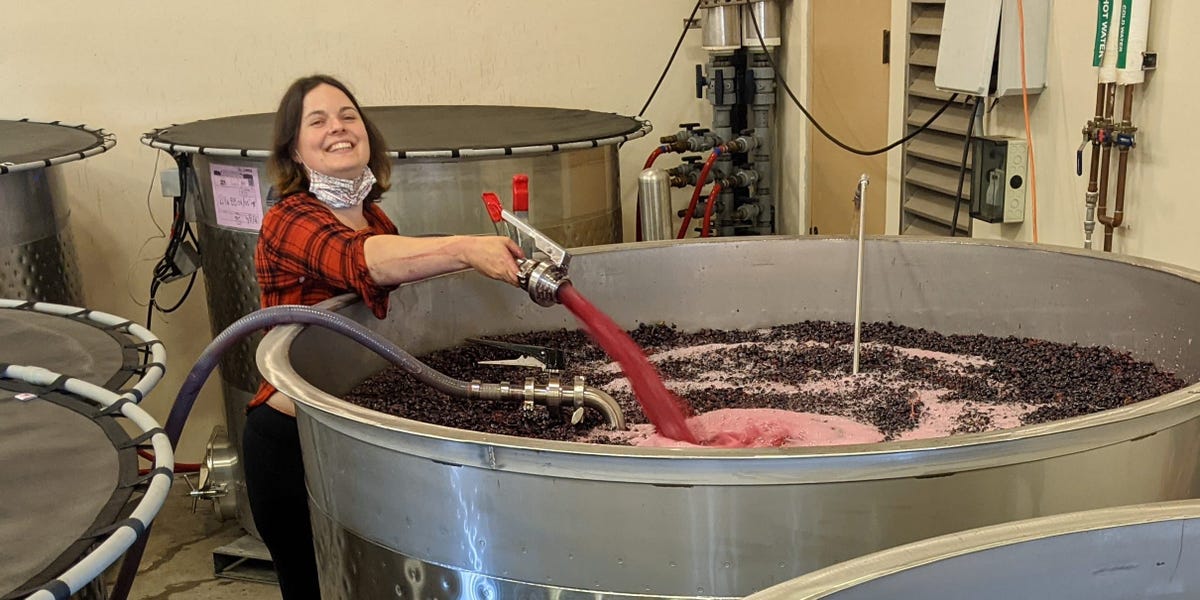 I Started Working at a Distillery and Winery for Extra Income

When the pandemic stalled my career as a freelance travel and food and drinks writer, I knew I needed to find a part-time job to supplement my writing income.

I was eager for something hands-on after digital burnout from five years of working on my computer. My interest had also recently turned to the world of spirits and cocktails, so when a ready-to-drink cocktail distillery called Straightaway in Portland announced they were hiring in production, I applied.

After a phone call and interview confirming that I could lift heavy boxes and was willing to get my hands dirty, I got the job.

I primarily worked on the bottling line, cycling between tasks like filling, labeling, shrink wrapping, and palletizing cases of product. The work was fast-paced but easy and made better by a fun crew of coworkers.

I loved being part of a team again: We played music, chatted, and finished the day with shifties, the free drink that over-21 workers enjoy at the end of their shift in the beverage industry.

Seeing my interest and eagerness to learn, the cellar lead in charge of making the cocktails would also sometimes show me how to clean tanks or measure and batch the cocktails.

After a while, though, I was ready for something more involved

Since being introduced to the wine world while living in Chile a few years back, I’d wondered what it’d be like to work a wine harvest.

I applied to be a harvest intern for fall 2021 at Adelsheim Vineyard, a winery in the nearby Willamette Valley. My boss at Straightaway, who had a winemaking background, was kind enough to give me a leave of absence from the distillery, so in August, I traded spirits for wine.

That applies to winemaking, too. The glamorous world of winemaking is hours of scrubbing drains, squeegeeing floors, climbing inside giant steel tanks to pressure-wash residue, and cleaning every speck of unwanted grape matter from the equipment.

Harvest season is one of the busiest times of the year, so working at the winery required near-total devotion from mid-August to the end of October. Workdays could last up to 12 hours and days off were sparse. I returned home tired, sore, smelly, and sticky, and woke up the next morning after not nearly enough sleep to do it all again.

The winery was hard, humbling, and laborious work, but I loved it

All the challenges and hardships, from the long hours to feeling like an idiot for not knowing how to handle equipment correctly, was worth it. Every day, I learned something new, like driving a forklift or mastering barrel rolling and stillage working,which involves moving, stacking, and filling wine barrels, in the wine caves.

The crew made the long shifts fun by singing along to “Red Red Wine” and other songs while working the pinot noir grape-crush line.

Punchdowns are where you use a specialized tool to manipulate and punch through the hard, fermented floating cap of grape matter on a several-hundred-gallon tank, releasing color and tannins. It’s a whole body workout. Sometimes, the grape caps are so hard it’s like trying to punch through clay.

Every day, I felt more capable, confident, and strong. When harvest ended at the winery in October 2021, I returned to freelance writing and the cocktail distillery with renewed purpose and a zest for discovery that the pandemic had sapped from me.

Since first starting work at the distillery, I’ve had to frequently remind myself that there’s no shame in needing a second job

I wasn’t a failure or bad at writing — I even had some of my biggest freelancing wins during the pandemic. I was doing what I needed to do to support myself, and gained new life experiences and became a more well-rounded person because of it.

With the pandemic’s two-year anniversary on the horizon, my freelancing is finally back on track and better than ever. I still work part-time in the distillery tasting room, partly for financial security and partly because I enjoy the people and atmosphere so much.

It’s one thing to read about inoculating cold soaks to start fermentation and quite another to start your mornings with the smell of industrial Fermaid O yeast in your nose and covered with sticky grape juice from doing pumpovers and punchdowns.

Ultimately, my forays into winemaking and cocktails reminded me of the joys and rewards of trying new things just because, even if nothing comes of it. My mental health had taken a nosedive during the pandemic, but it rebounded as I stepped outside of my comfort zone again and enjoyed the challenges of a new job.

The beverage industry was a safe harbor for me to find my feet again, discover new interests, and learn some cool new things in the process. I hope to stay involved in the spirits world in the future, maybe even by working different harvests around the world.

Xiang Guangda, the metals ‘visionary’ who brought the nickel market to a standstill