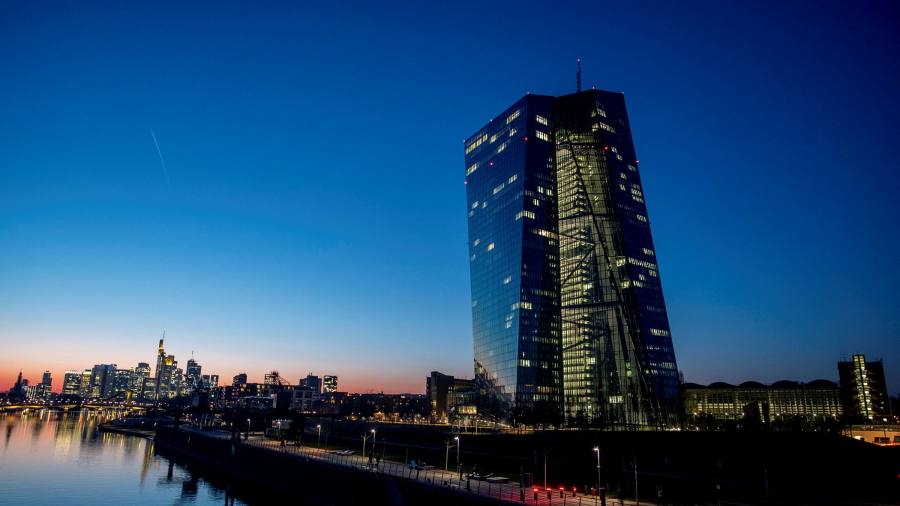 
The European Central Bank has scaled back its bond-buying plans and said net purchases could stop in the third quarter if medium-term inflation expectations continue to be driven up by the war in Ukraine.

“The Russian invasion of Ukraine is a watershed for Europe,” the ECB said in a statement after the governing council’s meeting in Frankfurt on Thursday, adding that it would “take whatever action is needed . . . to pursue price stability and to safeguard financial stability”.

Setting out a quicker reduction in its bond-buying plans this year, the ECB said it would reduce asset purchases to €40bn in April, €30bn in May and €20bn in June.

“If the incoming data support the expectation that the medium-term inflation outlook will not weaken even after the end of our net asset purchases, the governing council will conclude net purchases under the APP [asset purchase programme] in the third quarter,” it said.

The bank added the €1.85tn emergency bond-buying scheme it launched in response to the coronavirus pandemic would stop net purchases as planned at the end of March.

It kept its deposit rate at minus 0.5 per cent and said it was “ready to adjust all instruments” in its policy toolbox, including rates and asset purchases, to achieve its medium-term inflation target of 2 per cent.

“Any adjustments to the key ECB interest rates will take place some time after the end of the governing council’s net purchases under the APP and will be gradual,” it said.

The statement, which will be discussed by Christine Lagarde, ECB president, at a press conference later on Thursday, indicates the bank has opted to maintain as much flexibility as possible while responding to the surge in energy prices caused by the Ukraine crisis.

Only last month, the ECB governing council agreed it could speed up a “gradual normalisation” of its ultra-loose monetary policy, setting the stage for it to end all net bond purchases by the autumn and to raise interest rates by the end of the year.

But the invasion of Ukraine and the sanctions imposed on Russia by the west have prompted economists to slash their eurozone growth forecasts for this year and to predict that inflation will surge from the record level of 5.8 per cent reached in February.

This leaves the ECB in a difficult position, torn between the desire to tackle inflation that is expected to stay well above its 2 per cent target until at least next year and wanting to support the economy, which economists fear could suffer its third recession in two years.

The central bank will publish new economic forecasts later on Thursday. The crucial question will be whether it forecasts inflation at or above 2 per cent for the next two years, which would fulfil a key condition for it to raise interest rates for the first time in a decade.

The euro, which had fallen ahead of the ECB announcement, rebounded, trading 0.3 per cent higher at $1.110 against the US dollar.

Marvell Stock To Move Towards The $68 Resistance Level