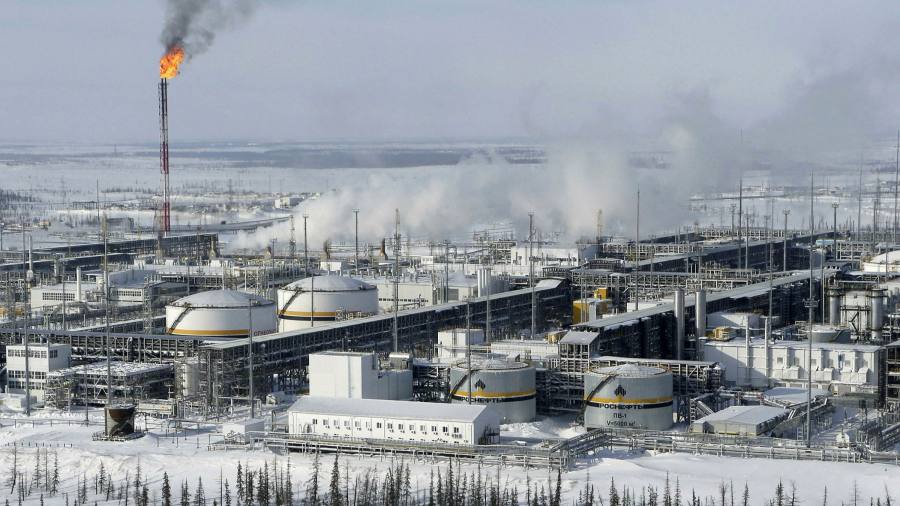 What does banning Russian oil mean for global energy markets?


The White House ban on imports of Russian petroleum into the US, announced on Tuesday, is the most significant move yet in a rapidly escalating global energy war between Russia and the west following Vladimir Putin’s invasion of Ukraine.

Brent oil settled 4 per cent higher at $127.98 a barrel on Tuesday, a day after hitting its highest intraday level since the global financial crisis, while US petrol prices hit a new high.

As analysts warn that further escalation is likely, here is a guide to what the ban means for global markets and its potential fallout.

What has been announced — and what hasn’t?

The UK said it too will phase out oil imports, with companies being given until the end of the year to cut off shipments. Canada, which imports negligible amounts of Russian petroleum, had already announced a similar ban.

But this is not an attempt to embargo Russian oil exports to the world, as happened when Iranian oil was largely cut off from global markets, most recently in 2018. The EU, which is far more reliant on Russian energy, is not following suit for now. A broader embargo would require secondary sanctions and probably need co-operation from EU countries and even India and China, Russia’s largest buyer.

How big a problem for the US is the ban?

The US is by far the biggest petroleum market in the world, with consumption of about 20mn barrels a day. Total US imports of crude and fuel amounted to 8.5m b/d in 2021 and Russia accounted for about 8 per cent of them. Coping with the loss of Russian crude will be easier than going without petroleum products such as vacuum gasoil that US refiners use as so-called feedstock for their facilities.

“Imports of Russian crude were largely opportunistic,” said Robert Campbell, an analyst at consultancy Energy Aspects. “The bigger effect will be felt in feedstock imports.”

While domestic US oil supply has surged in recent years, the country’s refineries were built to process “heavier” crudes than those that come from American shale oilfields, forcing them to use Russian petroleum products to keep operations running smoothly.

“Although the volumes are small relative to overall US oil demand, the loss of these supplies will complicate US refinery operations” and tighten the American gasoline market, said Campbell.

How big a problem is it for Russia?

In theory, Russia can just sell its oil to other buyers in a fungible market. What is not sold to the US or UK can be shipped elsewhere.

But the country is contending with what analysts describe as an emerging “buyer’s strike”: companies are becoming less willing to risk taking delivery of seaborne Russian crude, fearing legal or reputational jeopardy. The public relations blowback that followed Shell’s recent decision to buy a heavily discounted cargo of Russian oil was a salutary lesson for other possible buyers, said analysts.

This self-sanctioning, now compounded by the US ban, remains the more serious problem. Campbell said that unless Russia is able to continue shipping out cargoes of diesel and fuel oil each month, it could trigger a domino effect, as its refineries are forced to choke back activity. The loss of demand from Russian refineries might then force the country’s oil producers to slow or cut some of their upstream production.

While the bans from the US and UK may have a small impact on their own, the underlying significance is that the White House has shown it is willing to keep going further with sanctions, including on energy, said Richard Nephew, senior research scholar at Columbia University’s Center on Global Energy Policy.

“They’re saying, ‘This is a space we are prepared to go into,’” said Nephew, who helped devise the Obama administration’s sanctions on Iran.

The bigger fear for the oil market — explaining the jump in prices this week — is now one of escalation. Russia’s deputy prime minister Alexander Novak on Monday said his country had “every right to take a mirror decision” and cut off natural gas supplied to Europe via the Nord Stream 1 pipeline, a crucial artery for a continent that remains heavily dependent on Russian energy.

“I think we are in a snowball risk,” said Bob McNally, head of Washington consultancy Rapidan Energy Group. “We’re still in phase 1. I don’t think this is done getting worse.”

Helima Croft, managing director at RBC Capital Markets and a former CIA analyst, said calls for secondary sanctions on Russian oil could become hard to ignore as the human toll from Moscow’s invasion continues to mount.

“That’s when it gets really serious, when even refineries in China and India have to do cost-benefit analysis” about whether to buy Russian oil, she said. Germany and other big importers would be “in a bind”.

“What is the price you’re willing to pay to show that you can’t invade a sovereign country and rip up the postwar order in Europe?” she asked.

How high could prices go — and what impact

The greater the loss of Russian oil from the market, the higher the oil price will go. The uncertainties have raised the prospect that oil could soar past its previous record high of $147 a barrel in 2008 — close to $200/b when adjusted for inflation.

Novak, who was also Russia’s former energy minister, on Monday warned of $300/b oil if Europe followed the US in banning Russian imports of crude.

Analysts at Bank of America said a broad blockade of Russian oil would trigger “a supply shock nearly equivalent to . . . the 1979 oil crisis”, which caused immense economic pain in western nations. Prices could “potentially exceed $200/b” under such a scenario, they said.

Cuneyt Kazokoglu, head of oil demand at consultancy FGE, said the supply shock akin to 1979 could leave the world “on course for another severe global recession”.

Can US or other producers step into any breach?

The International Energy Agency, which last week announced a 60mn barrel release from government-held emergency storage, has signalled more supplies could come to try to tamp down the price rally.

Persuading Saudi Arabia, the only Opec producer with significant spare production capacity, to pump much more crude may require the Biden administration to patch up its relations with the kingdom first, Croft said.

Yet the sheer scale of Russia’s footprint in the global oil markets — it is the world’s third-biggest producer and largest oil products exporter — means a total loss of its supplies would be almost impossible to replace quickly.

“The uncertainty on how this conflict and oil shortages will be resolved is unprecedented,” said Damien Courvalin, an analyst at Goldman Sachs.

America’s shale producers have come under the spotlight as another source of potential short-term supplies to ease surging prices, but industry executives say a quick response from America’s shale patch is unlikely.

“As an industry, we can’t lose sight of the returns,” said Ryan Lance, chief executive of ConocoPhillips, one of the largest producers in the US. “And remember, whatever we start doing today doesn’t produce for 12 to 18 months. So really your crystal ball has to be looking out a couple of years.”

Clean energy advocates argue the crisis — and the spike in petrol prices that has come with it — is another reason for western consumer countries to end their dependence on the fossil fuels that enrich regimes such as Putin’s.

“This moment is a clarion call for the urgent need to transition to domestic clean energy so that we are never again complicit in fossil-fuelled conflict,” said Ed Markey, a Democratic senator from Massachusetts.