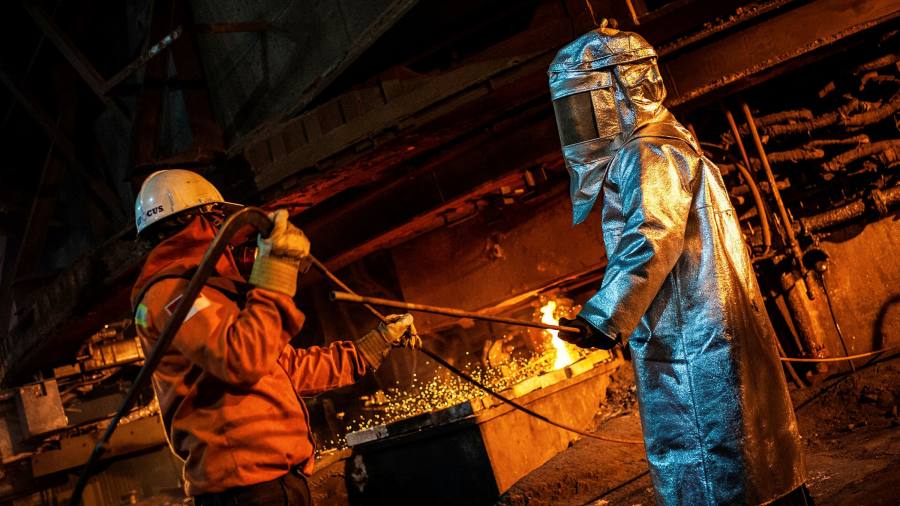 
The global nickel market ground to a near standstill on Wednesday after surging prices prompted China’s leading commodities exchange to freeze trading in some of its most active contracts.

The Shanghai Futures Exchange said it was suspending trading for more than half of the nickel contracts traded in mainland China on Thursday, after they rose by the maximum amount allowed for several days in a row.

Earlier in Wednesday’s session, China’s benchmark SHFE nickel contract surged 17 per cent to the equivalent of more than $42,000 a tonne after unprecedented moves in London led to a trading halt that was expected to last until Monday at the earliest.

The sharp surge in prices forced a prominent Chinese metals tycoon with a dominant market position to find more cash to cover his bets that the market would fall, sending prices even higher.

The price of nickel, which is used in the batteries that power electric vehicles, started to climb at the end of 2021 because of increasing demand from carmakers. It has accelerated in recent weeks amid fears that supplies from Russia could be disrupted after President Vladimir Putin launched an invasion of Ukraine two weeks ago. Russia is the largest global producer of high-grade nickel.

The Shanghai exchange had already noted “violent fluctuations” in overseas markets and imposed higher trading fees for the metal this week, in an attempt to ease volatility — urging market participants to “invest rationally and jointly maintain smooth market operations”.

“[Exchange officials] see this as appropriate due to the uncertainties presented by external markets — that maybe it’s better to wait until overseas markets become more stable before they relaunch,” said Bruce Pang, head of research at investment bank China Renaissance.

Pang added that while there were some nickel contracts left in Shanghai that could still trade during Thursday’s session, the message from regulators to any traders pushing up prices was clear: “Stop it, or we stop you.”

Traders responded to the Shanghai trading freeze by immediately dumping whatever nickel futures could still change hands as soon as the market’s overnight trading session began, sending almost every remaining contract down by the maximum permitted amount at the open.

The London Metal Exchange has said nickel trading will not resume until at least next week — and even then, it will have to impose emergency measures to ensure there is an orderly market. Those measures include a 10 per cent cap on nickel moves.

The LME is also studying a mechanism to reduce the large short position in the market before trading resumes. This would involve “netting off” large long and short positions.

On Tuesday, the 145-year-old exchange, which sets global prices for industrial metals, was forced to halt all nickel trading after prices doubled to a record above $100,000 a tonne.

The extraordinary surge in prices came as Xiang Guangda, the billionaire founder of China’s leading stainless steel and nickel producer Tsingshan Holding Group, was hit by margin calls and tried to close a wrong-way bet that nickel prices would fall by purchasing LME contracts.

His buying triggered a surge in prices that, in turn, fuelled a flurry of margin calls — demands for extra cash to cover losses on futures — across the market. Many smaller holders of nickel contacts were then forced to buy back their positions, exacerbating the price surge.

Xiang told local media on Tuesday that Tsingshan did not have any problems with its nickel position or its operations. Bloomberg reported on Wednesday that the company secured loans from banks including JPMorgan and China Construction Bank to help meet its margin calls. Traders believe Xiang is sitting on billions of dollars of potential paper losses.

Metal producers and big industrial consumers of raw materials use futures exchanges to fix the price of the commodities they are buying and selling. The suspension of nickel trading in London and Shanghai will send shockwaves through global supply chains.

Matthew Chamberlain, the outgoing chief executive of the LME, has defended the decision to suspend trading, saying some of its small members would have found it difficult to continue operating.

However, trading executives and fund managers have urged the LME to be more explicit over why it not only suspended trading but also cancelled a large portion of trades that took place on Tuesday.

“Cancelling trades between willing transactors well after the fact is NOT OK,” Clifford Asness, founder of AQR, one of the world’s biggest hedge fund groups, wrote on Twitter. “Suspending trading is one thing but LME, please explain why people should keep trading with you if you can ex-post cancel their transactions for your own mystery reasons?”

There is now concern about possible contagion in other futures markets. Overnight, ICE Clear Europe — the region’s largest commodities clearing house — said it would apply higher margin requirements on a range of markets, from gas to coal.