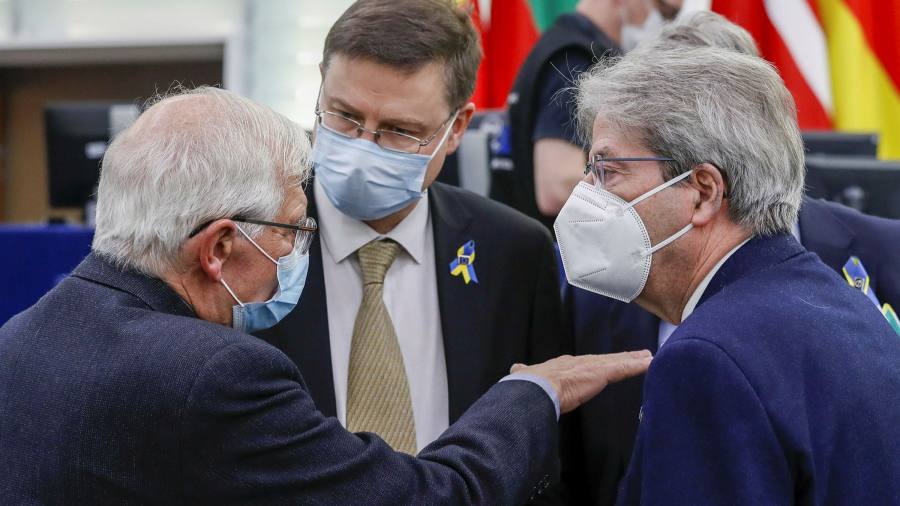 
Brussels has told EU countries to use the €200bn of unused loans available under the bloc’s recovery plan before considering more collective borrowing, as capitals seek ways of coping with the shocks reverberating from the Ukraine war.

Valdis Dombrovskis, the European Commission’s executive vice-president, told the Financial Times that the “first line” reaction for member states was to tap the unused capacity of the union’s €800bn Recovery and Resilience Plan.

This, he said, could be channelled into investments in energy security and “moving away from Russian gas and oil”. The EU was also working on temporary state aid rules to help member states support companies hard-hit by the crisis, as well as additional measures for a “co-ordinated EU response”, he added.

His words come as member states, including France, open a discussion over the idea of extra EU borrowing to help fund efforts to boost the union’s energy independence and security requirements ahead of a summit beginning in Versailles on Thursday.

EU officials have been examining options for extra fundraising, but Dombrovskis made it clear that the priority is making sure the EU’s existing budgetary facilities are used to the full.

The EU’s Covid-19 recovery fund pays out both grants and loans but member states including Spain, Portugal and Cyprus have not yet chosen to draw down the full amount of lending available. They can do so until August 2023.

Spain still has the ability to tap at least €70bn of recovery fund cash, Portugal €12bn and Cyprus €1.3bn, according to commission figures. Italy has already demanded the full quantity of grants and loans available, totalling more than €200bn.

The recovery fund cash cannot be used to substitute a recurring national budget expenditure but could fund solar panel installations and increase resilience such as cyber defence.

One EU diplomat said the idea of boosting the EU’s common borrowing had been “loosely” mentioned in recent conversations among member states but was not currently the union’s focus given the untapped capacity that is already available.

A French official said that the summit will see the “first exchanges” on the possibility of a new European resilience and investment plan, with a particular focus on energy and defence. But the official stressed that the debate on the plan was only just beginning. The focus at present is on assessing the economic consequences of the war in Ukraine, before examining the appropriate response.

Dombrovskis also expressed caution over ideas from some national capitals that money they borrow to fund green projects or even defence could be exempted from the bloc’s debt reduction rules.

Under the stability and growth pact, which has been suspended during the coronavirus pandemic, countries must reduce debt levels towards 60 per cent of gross domestic product and aim to keep budget deficits below 3 per cent of GDP.

“Even if we decide to pretend that part of the debt doesn’t exist, it still exists and still needs to be financed, and markets will still want to know how it’s going to be financed,” said Dombrovskis.

But he accepted that there could be “more gradual debt reduction pathways” for member states. The pact is currently suspended in the wake of the Covid-19 crisis, and EU officials have signalled that they will consider keeping it on hold next year as well.

Dombrovskis, a former prime minister of Latvia who has long warned of the dangers of Russian aggression, said the EU and allies would agree further trade measures against Moscow “in a matter of days”.

The EU is waiting for the 27 member states to agree before acting with the US, UK, Japan and other democracies to deprive Russia of “most favoured nation” status at the World Trade Organization, which would increase tariffs.

“We are coordinating with other international partners concerning the withdrawal of most favoured nation status from Russia and Belarus, which would allow us to impose additional tariffs on Russia and Russian imports,” Dombrovskis said. Canada has already made such a move.

US adds 528,000 jobs in surprise gain for labour market

Startups among entities to face tougher laws as Kenya moves…

‘Grotesque greed’ — but are energy windfall taxes the…