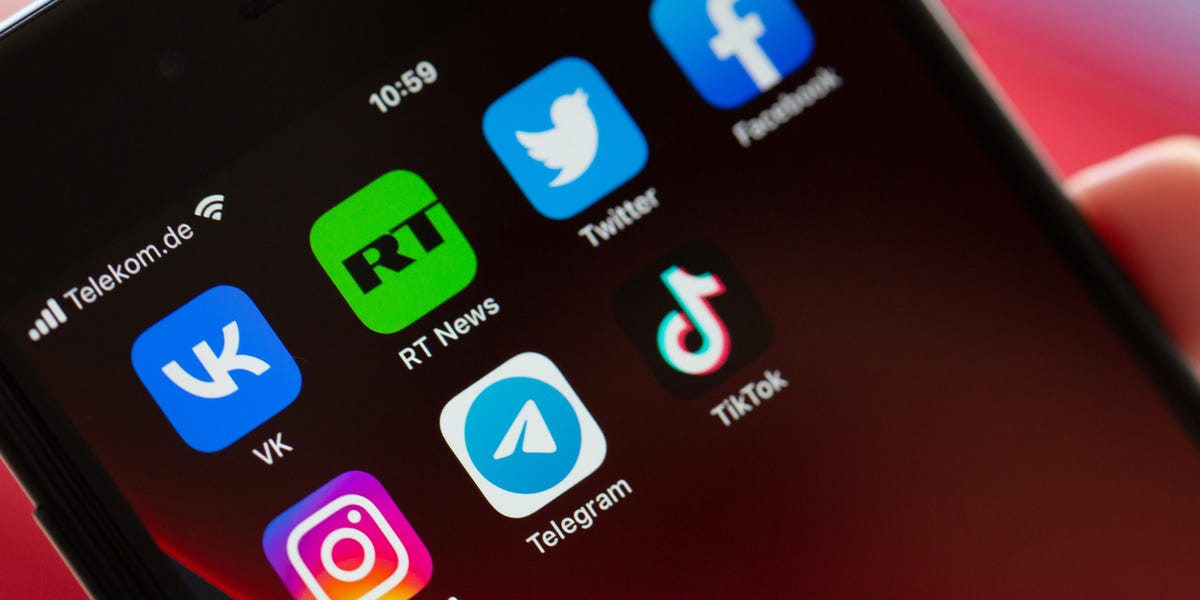 Chinese tech giants are diverging in their responses to Russia’s invasion of Ukraine.

Since Russia invaded Ukraine on Thursday, the US, Canada, Europe, and the UK have imposed sanctions on Russian elites and entities. In contrast, China has avoided outwardly condemning Russia’s actions. A spokesperson for China’s foreign ministry said on Monday the country doesn’t believe in using sanctions to resolve diplomatic issues, a Chinese transcript published on the ministry’s website shows.

That’s put Chinese tech companies in a bind. Unlike their Silicon Valley counterparts — many of whom don’t rely as heavily on Chinese consumers — Chinese tech giants find considerable support for their products and services both within China and elsewhere.

Keep reading for a look at how Chinese tech giants and their platforms are responding to the conflict in Ukraine.

TikTok — which is owned by ByteDance in Beijing — said on Sunday its users in Russia will no longer be able to watch new videos or livestreams. They also will not be able to view videos from outside of Russia, the Associated Press reported. This was in response to the fake news law that was recently introduced in Russia, TikTok said. Under the law, anyone who shares information about the Ukraine conflict that authorities deem to be false faces possible jail time, The Wall Street Journal reported.

Outside of Russia, TikTok has blocked the accounts of RT, a Russian state-run TV network, and Sputnik, a Moscow-headquartered news agency, on its platform in the EU, a TikTok spokesperson told Insider.

The move is in line with the EU’s ban on Kremlin-backed media, which European Commission President Ursula von der Leyen announced on February 27.

WeChat and Weixin are Tencent’s messaging apps. They are used by more than 1.26 billion users globally each month, Tencent’s earnings report as of September shows.

A Tencent spokesperson referred Insider to a message the company shared on February 25 on Weixin, the Chinese-language version of WeChat. In the post, Tencent avoided taking sides in the conflict but appealed to users to be objective when discussing international hot topics. “It’s not easy to maintain peace,” the post reads. “We need to respect and cherish life.”

Weibo is Sina’s Twitter-like service. As of December, 537 million users use it each month, numbers released by Weibo show.

The platform will automatically add geolocation to posts about the Russia-Ukraine war, Weibo said in a Friday post. The move comes as Weibo says users have made inappropriate remarks while pretending to be in Ukraine. The function will be controlled by the platform, and users will not be able to activate or deactivate it, said Weibo.

On February 27, Weibo said it had banned 10,000 accounts and removed more than 4,000 posts that “ridiculed war” and mocked the situation in Ukraine. Offending posts also included “vulgar” ones that denigrated Ukrainian women. Weibo did not respond to Insider’s request for comment for this story.

Ride-hailing app DiDi appears to have reversed an earlier decision to pull out of Russia.

But on February 26, DiDi said in a Weibo post that it would continue to support drivers and passengers in Russia. The post drew support from some users, who said it’s a company’s social responsibility to be aligned with a country’s position.

No reason was given for DiDi’s reversal. DiDi did not respond to Insider’s request for comment.

Lenovo, one of the world’s biggest producers of personal computers, reportedly halted shipments to Russia, per a February 25 tweet from Belarusian independent TV outlet Nexta. Lenovo, which acquired IBM’s personal computer business in 2005, has not responded to the news. Lenovo did not respond to Insider’s request for comment.

Xiaomi, a manufacturer of mobile phones and consumer electronics, is one of the top smartphone brands in Ukraine. The company had planned for a product launch in Ukraine on February 24 but later cancelled it, according to a South China Morning Post report. Social media posts on Facebook and Weibo referencing the event were deleted, per the SCMP. Xiaomi did not respond to Insider’s requests for comment.

This is a live list. Insider will update this story as more Chinese tech companies announce their stance on the crisis in Ukraine. Check back for more updates.

Have a tip about Chinese or Asian tech companies? Contact the reporter, Weilun Soon, at wsoon@insider.com.

What To Do With KYC Bitcoin