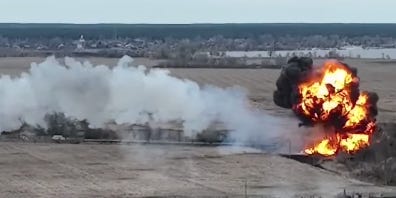 
Footage appears to show the moment a Russian gunship helicopter was shot down by a man-portable air-defense system (MANPADS) in the Kyiv Oblast province of Ukraine.

In the video, a helicopter immediately bursts into flames and crashes to the ground after being targeted by a weapon.

The footage was shared on Twitter by the Ministry of Defence of Ukraine on Saturday morning. “This is how the Russian occupiers are dying,” the ministry said in the caption. “This time in a helicopter!”

It was also circulated on Facebook by the General Staff of the Armed Forces of Ukraine.

The helicopter in the footage appears to be a Mil Mi-24 Hind gunship, according to MailOnline.

Up to eight paratroopers, in addition to its two-person crew, can conduct fire with small arms through the openings in the side windows of these helicopters. Mil Mi-24 Hind gunships have been in use since 1970.

The helicopter appears to have been shot down by an FIM-92 Stinger MANPADS, according to the military and civil aviation website The Aviationist. These man-portable air-defense systems developed in the US can operate as an infrared homing surface-to-air missile.

Several nations have said they are providing Stinger missiles to the Ukrainian forces amid the Russian invasion, including Germany, Denmark, The Netherlands, and the US.

It is not immediately clear when the footage was filmed, but according to geolocating by the investigative journalism group Bellingcat, the video was captured in the Kyiv Oblast region of Ukraine.

According to GPS coordinates, verified by Bellingcat, the aircraft crashed 25 miles north of the city center of Kyiv.