Chart Of The Day: NASDAQ Poised For Breakdown

Russia’s invasion of Ukraine continues to roil global markets. This morning European stocks moved deeply into the red again, causing US futures to decline. Commodities continued to maintain their sharp gains amid fears of supply crunches.

As the end of another eventful week approaches, risk appetite is very weak. Global stocks are reeling, and Wall Street is not going to be immune. Bulls are wounded; bears are smelling blood.

Indeed, the technical outlook appears quite bearish when you look at any major global index, including the weekly chart: 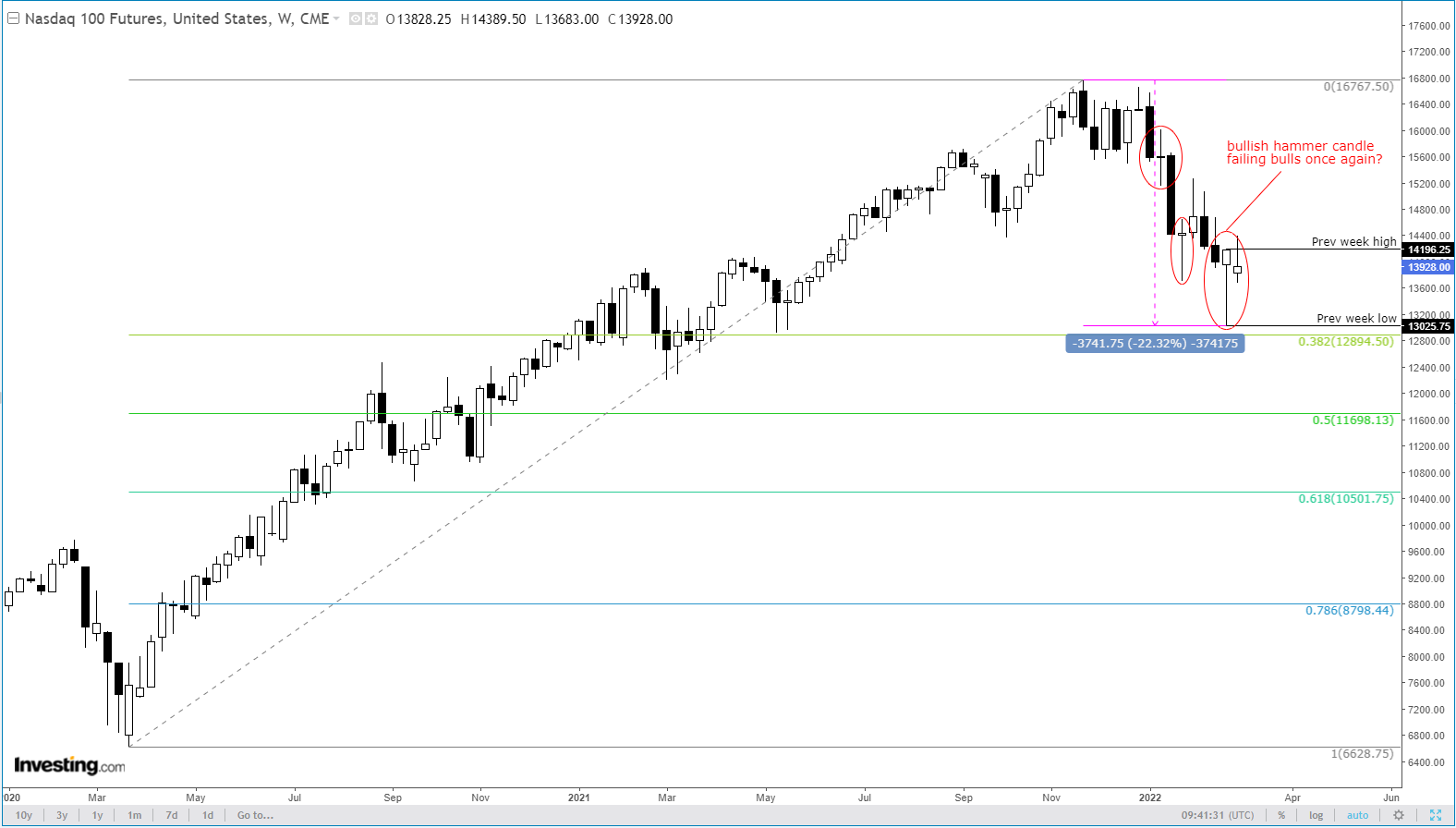 From the record high at the back end of last year to the lows hit last week, the NASDAQ has lost about 22%, although it has since trimmed those losses. But in the grand scheme of things, this correction is not too significant. Not yet anyway.

The index has not even pulled back to the relatively-shallow 38.2% Fibonacci retracement level against the rally that began at the height of the pandemic in March 2020. This means that there is still a lot of room to the downside before the index looks ‘cheap’ again.

The weekly chart of the NASDAQ gives us an idea in terms of how severe the recent correction has been and highlights a few interesting technical signals that appear to suggest it is still heading lower. Specifically, I wanted to highlight the failure of the hammer candle from last week, which failed to bring out the bulls.

That hammer candle was created when the index rallied more than 1,000 points from its lows last week. In light of such a strong rally, and the visually-appealing hammer candle, you would have expected to see some further upside follow-through this week. But that hasn’t been the case. While the index did climb above last week’s range, the buyers lacked conviction and we have now gone back below the high.

This is potentially very significant in that it points to the failure of a major bullish technical signal. It is possible therefore that we might see the index drop all the way back to below last week’s low to take out liquidity there (sell stops from the bulls).

Potentially, this drop could come in as early as today, with futures pointing to a lower open and European markets being sharply lower amid the escalation of the Ukraine situation. 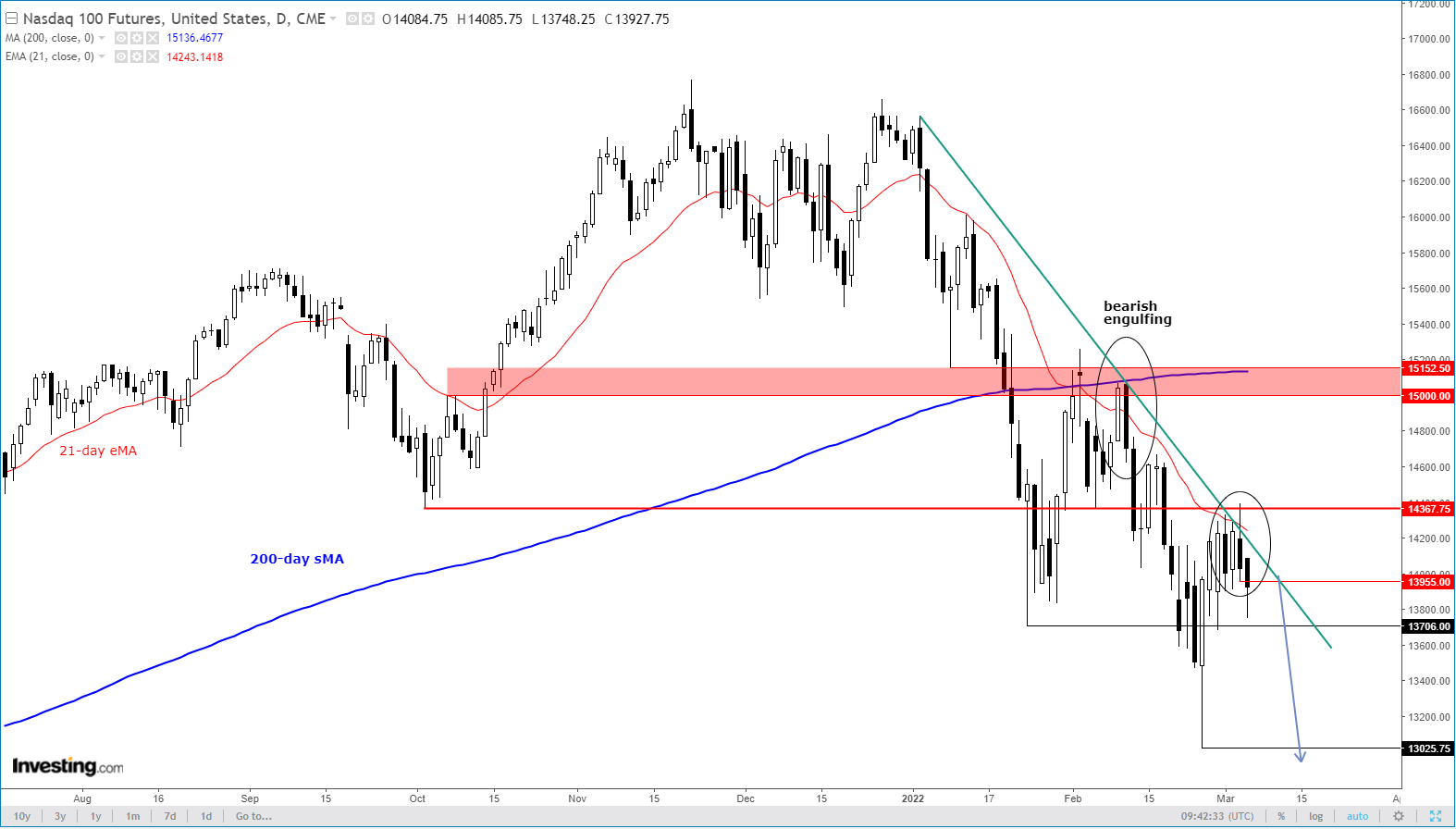 The daily chart shows that the bullish advance has ended right around the 14,567 resistance level, which was previously supported. From here, the index could drop in a similar fashion as it did when it had formed a .

Strengthening the bearish case is the fact the 21-day exponential moving average has capped the upside. This particular moving average tends to provide good support and resistance in strongly trending markets.

In recent times, you can see from the daily chart how it has consistently capped the upside, pointing to a strong bear trend. Finally, the bearish trend line had also been defended by the sellers, as was possible previously.

In terms of support, the January low at 13,706 is now the key short-term level to watch. If it fails to hold, then this would put the bulls in real trouble.

While everything looks doom and gloom, there are no certainties in these markets. As such, it is always good to be prepared for the unexpected. In this case, an unexpected rally. For me, the line in the sand is that 14,367 level (thick red line on the chart). A daily closing break above it would be a bullish development.

A future based on hydrogen fuel seems a way off