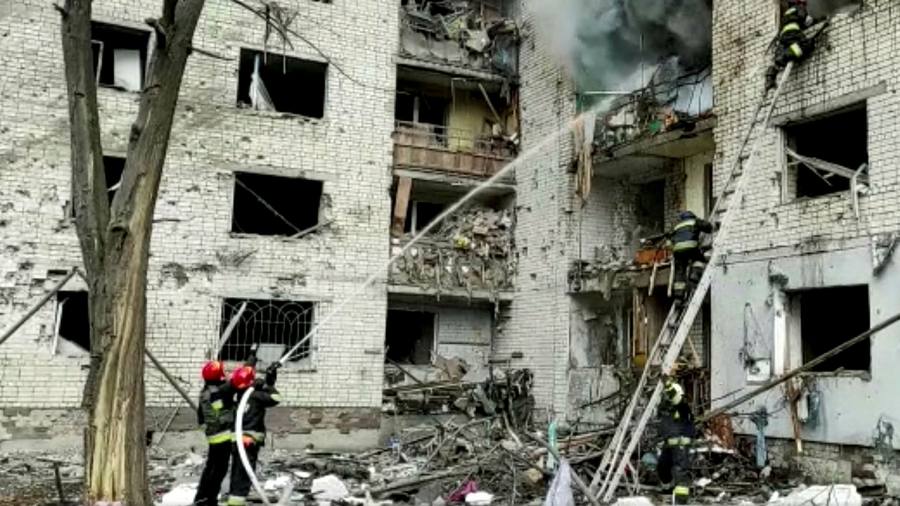 Russia subjected the Ukrainian port of Mariupol and the cities of Chernihiv and Kharkiv to missile bombardment yesterday as civilians bear the brunt of a war that Vladimir Putin has declared will be won “whatever happens”.

The indiscriminate and brutal attacks on residential areas came as Russian forces tightened their grip on the south-east of Ukraine. Moscow claims to have taken control of the Black Sea city of Kherson, but its military has shown little interest in running the towns under their control.

At least 22 people were killed in a strike on Chernihiv, with Russian cluster munitions hitting a residential area. Russian and Ukrainian delegations agreed yesterday to set up civilian evacuation routes out of hard-hit cities. The UN estimates that more than 1mn people have fled Ukraine.

Track troop movements on our regularly updated map of the conflict and follow our live blog for the latest developments.

Sign up to receive my colleague Valentina Pop’s essential newsletter, Europe Express, for the latest analysis and reaction. Thanks for reading FirstFT Europe/Africa. Here is the rest of the day’s news — Jennifer

1. UK steps back from suspending N Ireland trade deal Boris Johnson, the UK’s prime minister, is unlikely to trigger Article 16 proceedings against the EU over the controversial Northern Ireland protocol ahead of May’s Stormont elections because of the war in Ukraine.

3. UK lacks ‘credible plan’ for net zero transition: Lords report Britain will miss its net zero carbon targets because the government has failed to introduce “credible plans” to drive investment in key alternative technologies such as heat pumps, a parliamentary report has warned.

5. Turkish inflation pushes past 54% Turkish prices rose at their fastest rate in 20 years as a currency devaluation fed inflation. Food prices climbed 64.5 per cent last month and transportation jumped 75.8 per cent, pushing the consumer price index to its highest level since March 2002.

2022 Paralympic Winter Games The Games will kick off in Beijing, where Russian and Belarusian athletes have been banned from competing by the International Paralympic Committee. Multiple national paralympic committees were “threatening not to compete” if the nations were included in the Games following Russia’s invasion of Ukraine.

Scottish Labour’s spring conference The annual gathering kicks off with leader Anas Sarwar expected to announce a major rebranding effort that will include replacing the party’s iconic red rose with a thistle.

Economic data IHS Markit construction purchasing managers’ index figures are out for the world, the European Union, France, Germany and the UK. US employers are forecast to have added jobs in February as coronavirus case numbers fell and fewer workers called in sick. (FT, WSJ)

China’s National People’s Congress The annual plenary session begins tomorrow, with President Xi Jinping preparing to extend his period in office into a third term. But furore over Xi’s support for Russia and the collapse of his zero-Covid policy in Hong Kong threaten to overshadow the gathering.

Borrowed money funded ‘Spac king’ share purchases Chamath Palihapitiya, a vocal promoter of blank-cheque companies, financed two signature deals with borrowed money while emphasising the importance of sponsors having their own capital at risk. Here’s how the arrangements indicate he put less personal cash into his deals than had been thought.

Hip-hop stars miss out in music catalogue gold rush You might have noticed headlines about musicians selling their life’s work for eye-popping sums of money. But rappers, despite being the backbone of the streaming revolution, are losing out to boomer rock musicians, writes Anna Nicolaou.

How did London and the US became safe havens for “dirty money”? These three books examine how financial centres assumed the role of “butlers” for autocrats.

S&P 500 At Tipping Point To Start A Bear Market