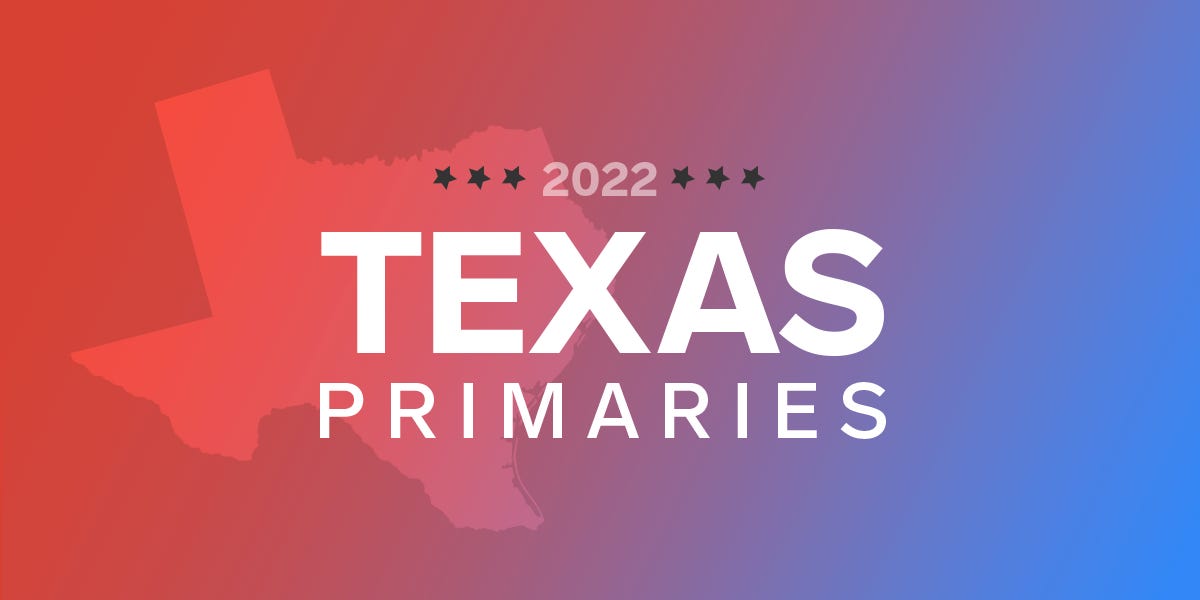 
Texas is holding primary elections for a number of important statewide and congressional races. Follow along for live results.

O’Rourke came within three percentage points of defeating Sen. Ted Cruz in 2018, but faces an uphill battle winning statewide in a midterm year where the party in power typically loses seats and faces more challenges winning in a red state like Texas. Trump, for his part, won the Lone Star State by over five percentage points in 2020.

Paxton has been under indictment on securities fraud charges since 2015, but has yet to face trial. He is also currently under an FBI investigation spurred by a group of seven whistleblowers who formally accused him in late 2020 of bribery and abusing his office to benefit a wealthy real estate developer and donor. Paxton has said the whistleblowers’ claims are “overblown, based upon assumptions, and to a large degree misrepresent the facts.”

The biggest remaining uncalled election in Texas and the highest-profile House primary of the night is the rematch between Democratic Rep. Henry Cuellar and progressive challenger Jessica Cisneros in the majority Hispanic South Texas-based 28th District.

Texas, which gained two new House of Representatives seats as a result of the 2020 Census, is also holding its first congressional primaries under its new maps, including the Cuellar-Cisneros race.

Cuellar, a longtime centrist Democrat, defeated a primary from Cisneros, an immigration attorney and one of his former interns, in 2020. In 2022, he maintained strong institutional support in the district as well as a solid fundraising and cash-on-hand advantage.

But Cuellar also ran under a cloud of legal uncertainty after the FBI raided his Laredo home and campaign office in mid-January.

ABC News reported that the raids were connected to a “wide-ranging” federal investigation involving “US businessmen” and the country of Azerbaijan. Cuellar, the co-chair of the Congressional Azerbaijan Caucus, has maintained close ties with the oil-rich former Soviet nation for years but maintains “no wrongdoing.”

A slew of Democratic and Republican candidates are also competing for their parties’ nominations for Texas’ now-open 15th District, one of the only competitive seats under the state’s new congressional map.

And on the GOP side, the crowded Republican primary to replace retiring Rep. Kevin Brady in the Houston-adjacent 8th District, led by former Navy SEAL Morgan Luttrell and Republican operative Christian Collins, is a burgeoning proxy fight between two wings of the GOP, the Texas Tribune reported.

Not all primary elections, however, will be settled on Tuesday. Texas is a runoff state, meaning if no candidate earns over 50% of the vote, the two highest-performing candidates will face off in a May 24 runoff.

Why Regulation Should Apply To Bitcoin