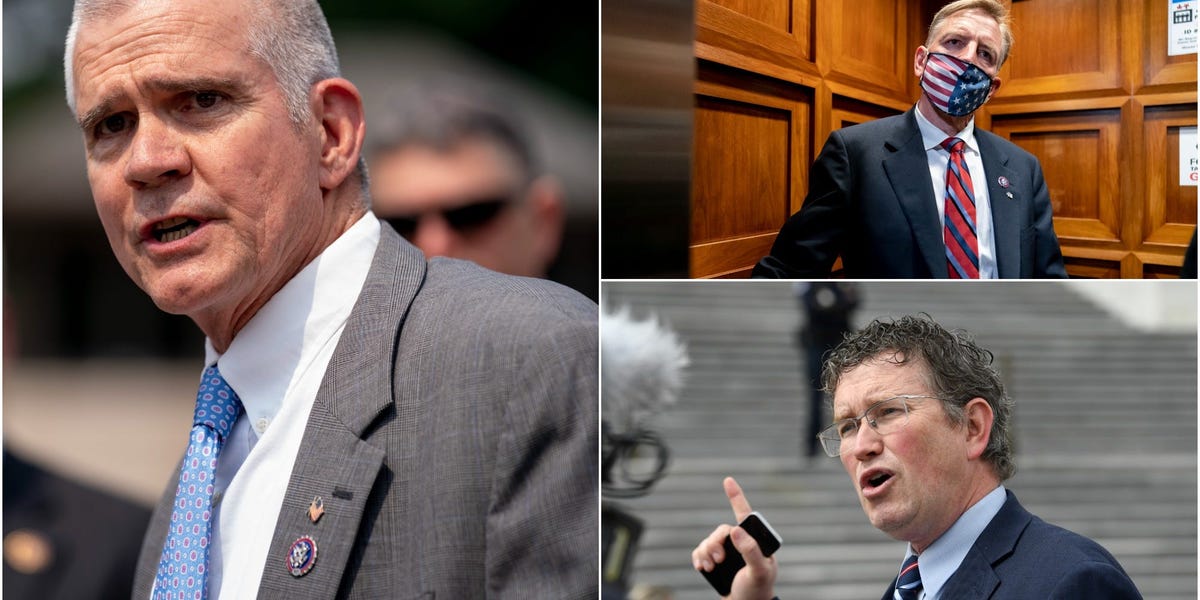 Just three members of the US House — all Republicans — voted against a bipartisan congressional resolution expressing support for the Ukrainian people and Ukraine’s territorial integrity as the country battles the Russian invasion.

Rep. Paul Gosar of Arizona, Rep. Thomas Massie of Kentucky, and Rep. Matt Rosendale of Montana were the only nay votes on House Resolution 956, titled “Supporting the People of Ukraine.” The resolution passed the House on Wednesday with 426 votes in favor.

The non-binding resolution, among other things, says the House “supports, unequivocally, Ukraine’s sovereignty and territorial integrity” and “states unambiguously that it will never recognize or support any illegitimate Russian-controlled leader or government installed through the use of force.” It also calls for the US and other nations “to deliver additional and immediate defensive security assistance.”

It ends by stating the House “stands steadfastly, staunchly, proudly, and fervently behind the Ukrainian people in their fight against the authoritarian Putin regime.”

The three congressmen have all embraced an isolationist view of foreign policy.

Gosar tweeted “God be with the people of Ukraine” on February 23, but subsequently blamed both President Joe Biden and NATO, the North Atlantic Treaty Organization, for Russia’s war in the country.

“NATO has no business inviting Ukraine into membership. This is Russia’s backyard. Biden failed to recognize this geopolitical reality,” Gosar tweeted.

The House resolution emphasizes “that NATO’s relationship with Ukraine is a matter only for Ukraine and the 30 NATO allies.”

Gosar, who has come under scrutiny for his ties to white nationalist groups, was censured by the House in November 2021 after sharing an edited video on Twitter that showed him, stylized as an anime character, slashing President Joe Biden and killing Democratic Rep. Alexandria Ocasio-Cortez.

Massie, a libertarian, was one of three House Republicans, along with Rep. Andrew Clyde of Georgia and Rep. Chip Roy of Texas, to vote against the Emmett Till Anti-Lynching Act on Tuesday.

“If you want to fight communists in Eastern Europe, head on over,” Massie tweeted at a critic on February 25. “I’m worried about the abandonment of our Constitutional Republic and troubling shift toward communism and autocracy here.”

Rosendale said in a February 24 statement that the United States “has no legal or moral obligation to come to the aid of either side” in the Russia-Ukraine conflict.

“In talking to folks across Montana, they are much more concerned with stopping the invasion taking place in our country by millions of illegal aliens than they are the invasion of an Eastern European country halfway across the world,” he said.

The US, along with other European nations, has sanctioned Russia over its invasion. But Biden has repeatedly said the US does not plan to send troops into Ukraine to fight Russia.

Both Rosendale and GOP Rep. Madison Cawthorn of North Carolina have introduced legislation limiting the US from providing material aid to Ukraine until more resources are put towards US border security and, in the case of Rosendale’s proposal, building a wall on the US-Mexico border.

“The American people are sick and tired of career politicians consistently putting the interests of foreign nations above our own, we must put America first,” Rosendale tweeted on Monday.