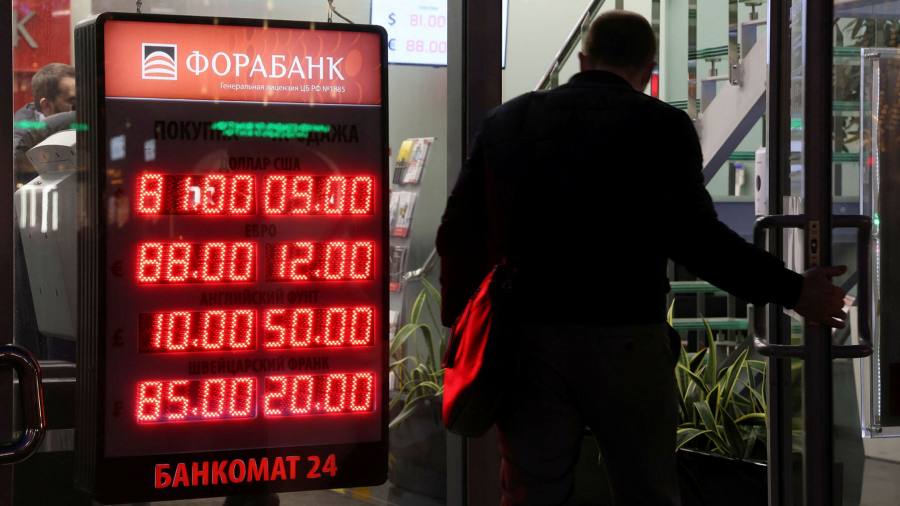 The shock and awe of sanctions on Russia


Such is the shock over Russia’s invasion of Ukraine that western sanctions have gone much further than seemed likely even a week ago. Not only have several Russian banks been barred from the Swift messaging network, but the EU, US and UK have placed sanctions on Russia’s central bank, sharply reducing access to its foreign currency reserves. These moves will not stop Vladimir Putin’s war in its tracks. But they will put huge pressure on the Russian economy, and squeeze over time the Kremlin’s capacity to wage its war.

Since Russia’s aggression towards Ukraine in 2014, Moscow has sought to protect its financial system from possibly being cut off from international markets by the US. Its central bank amassed $630bn in foreign exchange reserves and shifted them away from the dollar and towards the euro, China’s renminbi and gold. Moscow seemed to believe a disunited Europe, dependent on Russian gas, would not join with the US. But around half of Russia’s total reserves are now frozen.

Combined with broader financial sanctions, the impact has been sizeable. The rouble has already fallen by more than during Russia’s 1998 default, even though the central bank has doubled interest rates to 20 per cent. Bank runs have not yet materialised but many Russians have been queueing to get hold of cash. While the west is not seeking to target the Russian people directly, the package will squeeze living standards, potentially eroding support for a leader who came to power promising stability after the chaotic 1990s.

Oil and gas payments remain largely excluded from sanctions. That may be regrettable, but for as long as Europe depends on Russian supplies to avoid shortages, sanctions on payments would be pointless. If Moscow’s shipments were only partially restricted and not completely stopped, moreover, higher global energy prices would offset some of the cost to Russia.

Some of the measures have been put together at high speed. The west now needs to take stock of their impact. Democracies are seeking both to ensure the Putin regime pays a high price for its increasingly bloody attack, and alter the Russian president’s calculus on how far he is prepared to go in his aggression. They must also take into account that imposing a rapid economic collapse would risk provoking a backlash among Russians, who are not responsible for the war, and driving an increasingly paranoid leader into a corner. Sanctions must be calibrated to impose heavy but controlled pressure.

Public messaging around their goal also needs to be united and consistent. Loose talk such as France’s finance minister suggesting the purpose was “total economic and financial war against Russia, Putin and his government” can be seized on by the Kremlin. Dmitry Medvedev, former president and now deputy head of Russia’s security council, warned that economic wars often turn into real ones. Signalling to the Kremlin is needed over “off-ramps” — or under what circumstances sanctions could start being eased — to avoid both sides becoming locked into an escalatory cycle.

Urgent political and technical planning is required, too, to manage spillover effects on the western financial system. The negative consequences could be unpredictable, with some investors forced to sell their most liquid, safe assets — such as US Treasuries — to compensate for Russian-linked assets being frozen. The effect may also ripple through supply chains in unforeseen ways, with missed payments from Russian trade partners affecting European and US companies. The west has shown unexpected resolve; it will need to show it can take economic pain as well.