Over the past two years, Tesla (NASDAQ:) dip-buyers have been some of the happiest stock investors in the market. Shares of the electric vehicle manufacturer soared 540.96% during that period, hitting multiple record highs, thus becoming one of Wall Street’s favorite speculative mega-cap stocks.

The Austin, Texas-based Tesla rallied 7.48% on Monday as traders bet that imposed against Russia, Europe’s largest energy producer, will accelerate the global transition towards clean energy. Shares closed at $870.43. 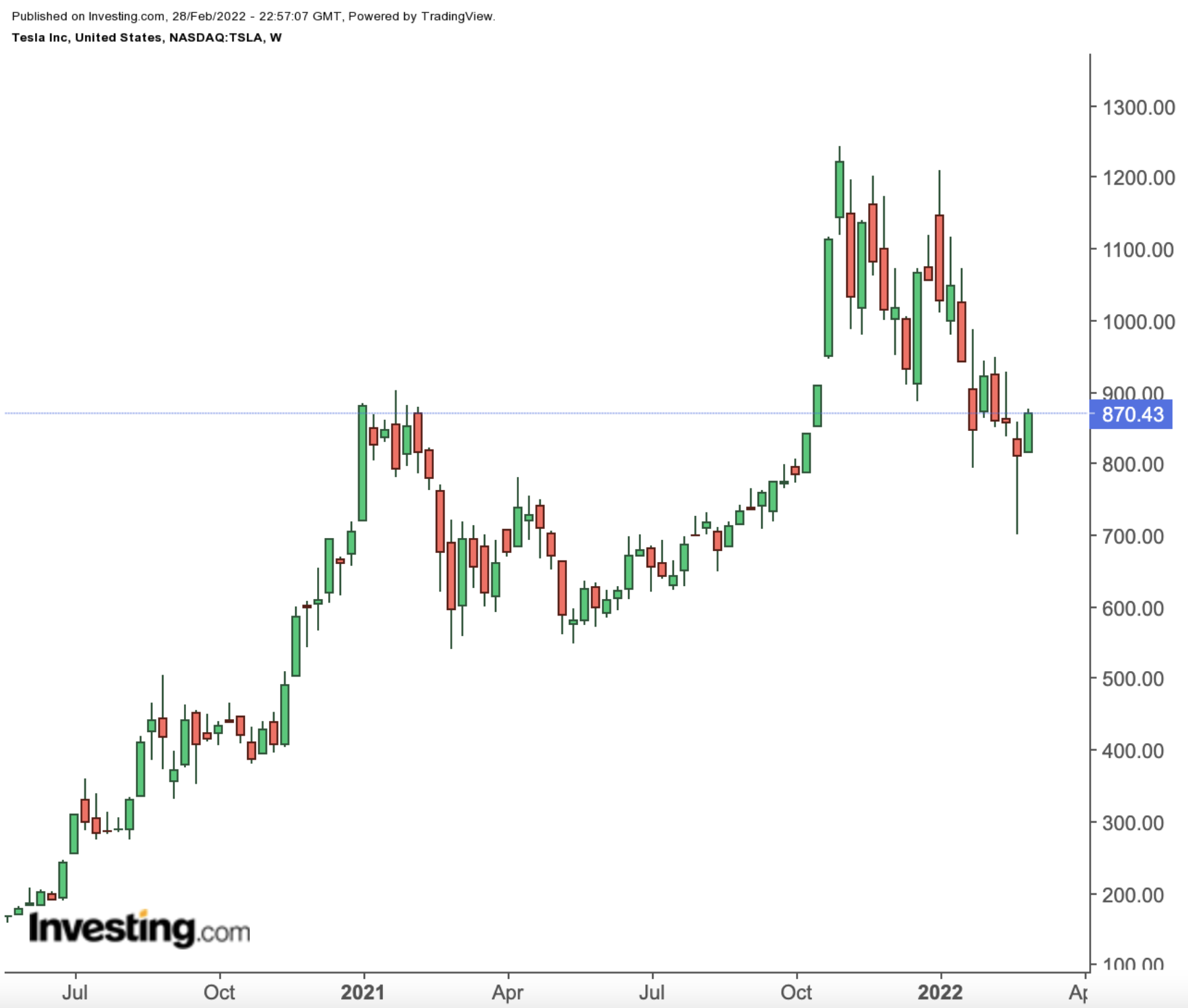 However, since the start of the year, the world’s largest EV maker has lost 17.6% of its market value. Though investors’ mass exit from growth stocks is partially to blame for the stock’s current slump, Tesla’s decline is much steeper than that of the broader market. The tech-heavy Index fell about 12.7% since the start of this year.

This weakness comes after a remarkable run that sent TSLA’s market capitalization to over a trillion dollars in October 2021. Now, for investors on the sidelines, the big question is whether this sell-off provides an opportunity to buy Tesla, or is it the beginning of a much deeper correction?

The good news for Tesla bulls is that this is perhaps the first time in many years that Tesla’s current market value is below analyst consensus estimates for the stock. Investing.com’s survey of 40 analysts shows that Tesla stock has a 10.2% potential upside over the next 12 months. 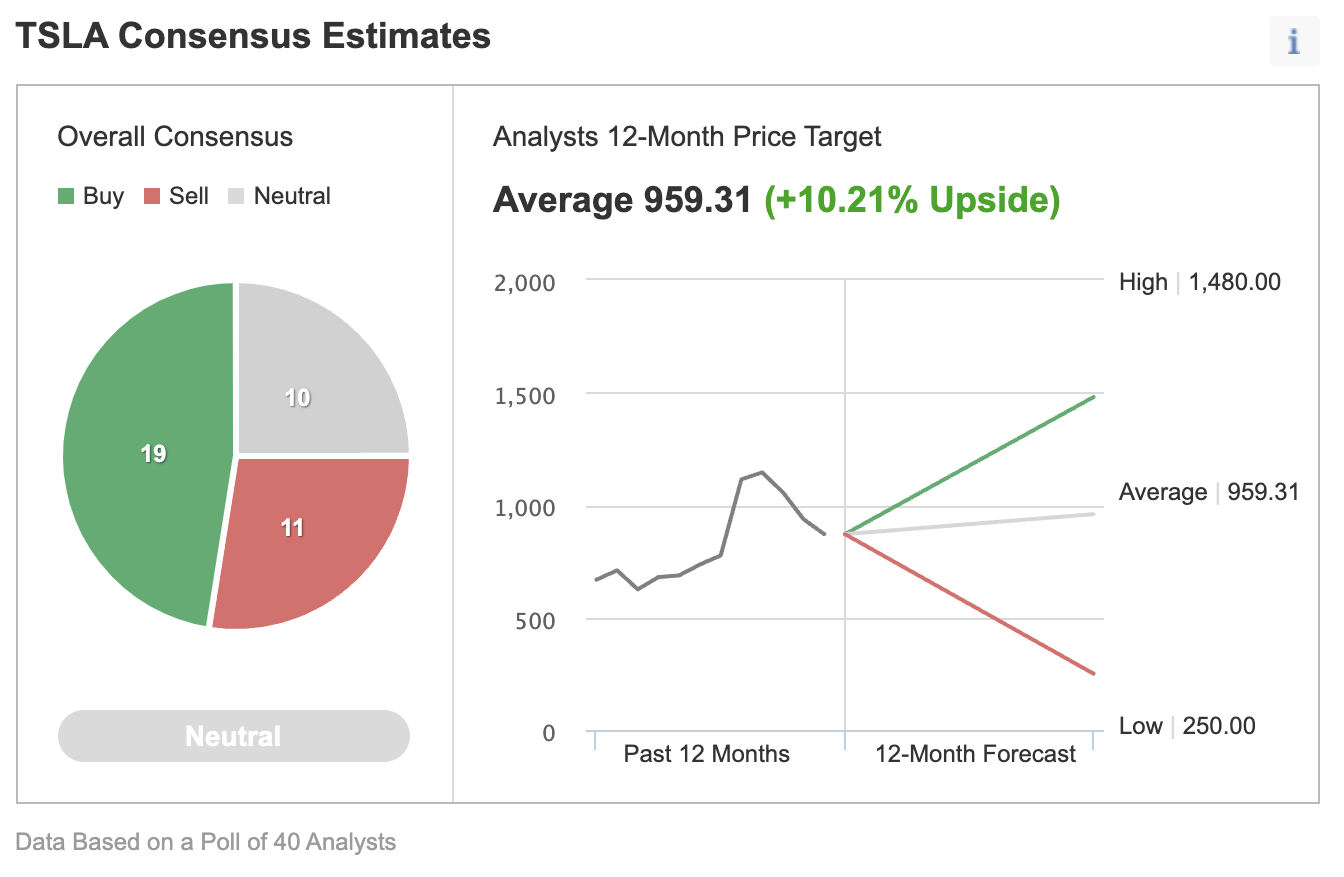 Furthermore, when you look at the broader picture, Tesla’s lead in the electric-vehicle market remains unchallenged. Tesla remains in high-growth mode, well ahead of competitors in a race to produce EVs for the mass market.

In the fourth quarter, Tesla record revenue and earnings per share, which beat analysts’ estimates, despite widespread chip shortages that negatively affected other carmakers.

Tesla delivered more than 936,000 vehicles worldwide in 2021, up 87% from the year before, exceeding the 50% average annual expansion projected over several years. Co-founder and CEO Elon Musk expects to comfortably boost that growth once again in 2022.

In a recent note, Daiwa Capital Markets upgraded Tesla to outperform from neutral, saying the carmaker is likely to sell more cars if oil prices continue to surge. Its note added:

“Tesla’s ability to export out of cost-efficient China and history of better managing chip shortages in 2021 could strengthen its competitive position under the current Russia/Ukraine situation. At the same time, higher oil prices and potential scenario of fuel shortages, especially in Europe, could accelerate the shift to EVs.”

Tesla’s competitors are investing billions in developing clean energy vehicles, but many still rely on oil-powered vehicles to drive profits. According to Daiwa, rising costs from supply chain issues could make those future investments tougher to pull off.

Credit Suisse Group also upgraded Tesla to buy in a recent note, saying the selling pressure over the past few weeks has left the stock looking “attractive.” Credit Suisse’s analysts expect Tesla shares to recover from their recent pullback, supported by solid fundamentals, including volume growth and sustained margin strength. At 81.97, Tesla’s forward earnings multiple is the lowest since March 2020.

Tesla investors remain distracted by many nonbusiness issues despite this favorable fundamental and valuation outlook. Last week, the Wall Street Journal reported that the Securities and Exchange Commission (SEC) is investigating whether recent stock sales by Musk and his brother, Kimbal Musk, violated insider-trading rules.

In addition to the latest probe, Musk and the SEC have been embroiled in a court fight since 2018, when Musk tweeted that he had “funding secured” to take Tesla private at $420 a share. After an investigation, the SEC concluded that Musk had committed securities fraud. The regulator at that time also sought to ban Musk from serving as a director or officer of a public company before the two sides settled.

Given current volatile trading conditions, spurred by potential interest rate hikes and the Russia-Ukraine conflict, it’s tough to predict which way Tesla shares will go from here. In this challenging operating environment, it will be unrealistic, in our view, to expect another meteoric rise in Tesla shares in the short run.

However, the current bearish spell offers a good entry point for long-term investors, especially when the company remains on a solid growth path with a clear lead over competitors.