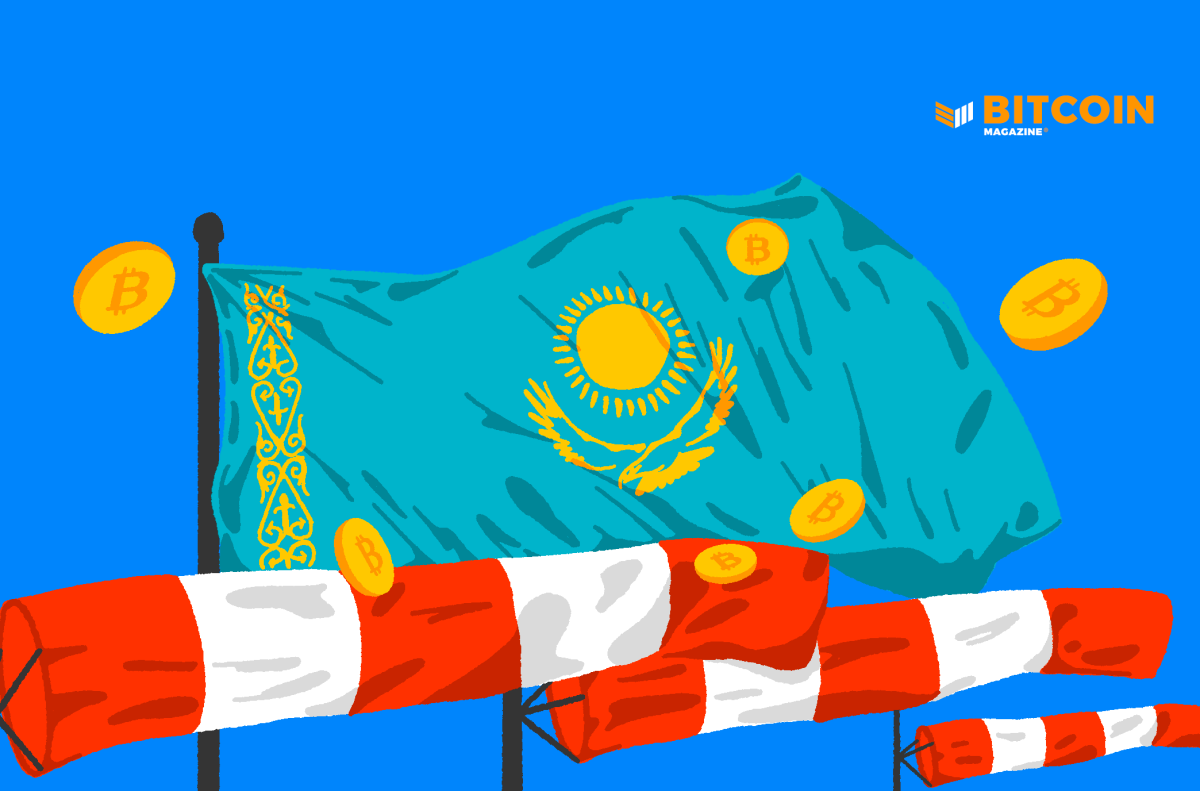 Bitcoin’s hash rate is hovering around all-time highs, but many miners are still struggling to recover from regulatory changes in regions that became major hubs for the industry.

During the summer of 2021, China’s bitcoin mining ban catalyzed a 50% drop in hash rate in the span of barely two months. But on February 15, Bitcoin’s hash rate topped 210 exahashes (EH) for the first time ever. This record amount of computing power dedicated to securing the network marks a roughly 30% increase from Bitcoin’s hash rate peak in 2021, before China banned mining.

By only looking at Bitcoin’s rising hash rate, it can easily be inferred that the mining industry has recovered from China’s ban. But hash rate recovery hides the ongoing struggles of many miners who labored to relocate outside of China and now face a fresh round of regulatory headaches and operational challenges elsewhere in Asia.

Kazakhstan has historically been a popular and welcoming destination for Bitcoin miners. In July 2020, the Kazakh government estimated that roughly 14 full-scale cryptocurrency mining farms were operational inside its borders. And government ministers have regularly made public statements about the hundreds of millions of dollars they expected to flow into Kazakhstan’s cryptocurrency mining sector.

Following China’s mining ban, some estimates reported that Kazakhstan’s share of Bitcoin hash rate more than doubled in three months, from roughly 10% in June 2021 to 22% in August as exiled miners relocated to Central Asia. Other miners (discussed later in this article) with existing operations in the region planned to accelerate the country’s mining growth even more by announcing significant operational expansions.

But Kazakhstan has struggled to cope with the surge of new mining activity since China’s ban. In the wake of China’s mining ban, the Kazakh government has implemented some acutely painful changes to its energy regulations and is restricting growth of Bitcoin mining in the country. These changes aimed at controlling new mining activity are forcing many miners to start once again searching for a new home.

After being historically welcoming, Kazakhstan’s government took a series of steps that have made life increasingly difficult for Bitcoin miners over the past eight months. Regulatory changes started in June 2021 when the president signed into law a tax code amendment that would tax cryptocurrency mining for the first time ever starting in January 2022.

Throughout the summer, Kazakhstan suffered power shortages and some complete blackouts in Almaty, its largest city. News reports blamed harsh summer heat and surges in demand for air conditioning for the electricity problems. But in September, local news outlet Kazakhstan Today published an article titled, “Electricity Shortage Arose In Kazakhstan Due To Cryptocurrency Mining.”

And although not entirely due to that one article, from that point the narrative around Kazakhstan’s electricity problems changed to focus significantly on Bitcoin mining.

A month later, the Kazakh Energy Ministry introduced for public discussion changes to power consumption rules for miners, which, among other things, would limit total capacity for new mining centers to 100 megawatts (MW). While these changes were being discussed, multiple mining companies reported suffering from electrical supply disruptions from Kazakhstan Electricity Grid Operating Company, the national grid operator. Later in October, the 100 MW limit became law.

Miners started being categorized into two groups by the Kazakhstan government after these changes: “white” and “gray.” Companies that respected power limitations for new farms, endured electricity curtailments and were properly licensed and registered fell into the “white” group. Miners that tapped into the power grid without proper approval were “gray.” Kazakhstan’s Energy Ministry said “white” miners wouldn’t be disconnected from the national grid, but anyone unlawfully mining could be.

The distinctions between “white” and “gray” mining meant nothing in late January, however, as the country’s energy problems worsened — CoinDesk reported that all miners in the country were to have their power completely shut off from January 24 through the end of the month. Later in February, Kazakh authorities shut down 13 mining operations (presumably in the “gray” category of miners) and promised more crackdowns on illegal mining.

Even though Kazakhstan’s mining industry isn’t suffering a blanket ban like the one that China imposed, life has become exponentially more difficult for Kazakh miners over the past several months. And things could continue worsening with unlicensed miners being targeted by authorities, with some Kazakh policy makers considering a 500% tax increase for registered miners.

How Are Kazakh Miners Being Impacted?

Some big names in the Bitcoin mining industry have a presence in Kazakhstan. Even though they won’t all be forced to move every machine out of Kazakhstan, each of them surely feels the strain of Kazakhstan’s policy changes.

BIT Mining, a publicly-traded company that recently pivoted to Bitcoin mining, planned to invest over $9 million in a Kazakhstan-based mining facility with up to 20 MW of power. BIT Mining started moving ASIC mining machines to Kazakhstan from China’s Sichuan region in June 2021 following China’s mining ban. The company planned to move roughly 3,000 machines from China to Kazakhstan. As of mid-February, however, the company completely scrapped its construction plans in Kazakhstan, instead focusing on expanding operations in the U.S.

Canaan, a publicly traded ASIC manufacturer, also made big plans in 2021 to build mining operations in Kazakhstan. The company started mining in the Central Asian country in June 2021. By December, the company had delivered over 10,000 machines to the region and said it planned to deploy roughly 850 petahashes of mining capacity in the near future. Canaan hasn’t yet provided an update on its machine deployments given the region’s changing regulations.

Chinese gaming company The9 got into mining in early 2021, with an agreement to buy over 26,000 machines that would be deployed in China’s Xinjiang, Sichuan and Gansu regions. After China shut off its access to power, The9 announced in August its plans to build a 100 MW facility in Kazakhstan through a joint venture with KazDigital. The9’s next earnings report is expected in March, and just how much Kazakhstan’s strict energy restrictions have complicated its expansion plans is not yet known.

A private mining company, BitFuFu, also shipped an estimated 80,000 ASIC machines to Kazakhstan and suffered bigly from the country’s abrupt energy policy changes. In the fourth quarter of 2021, the company simply abandoned its machines in the region after struggling with Kazakhstan’s power rationing, opting instead to buy new hardware from Bitmain, ship it to the U.S. and resume mining.

Genesis Digital Assets is a leader in the mining industry with facilities operating all around the world since 2013. In July 2020, Genesis CEO Marco Streng published a nearly-800 word blog post on LinkedIn explaining the company’s strategy for “doubling down” on investing in Kazakh mining capacity. Unlike other governments with anti-Bitcoin and anti-innovation mindsets, Streng wrote, Kazakhstan’s government understands “the importance of having an open mind to new ideas.” Streng also noted that the Kazakhstan government expected to attract $740 million in cryptocurrency-related investment over the next three years.

“Our plans alone far exceed this amount,” he wrote.

Of course, these plans were made prior to Kazakhstan’s energy rationing and mining restrictions. Exactly how significantly Kazakhstan’s policy changes have affected Genesis’ growth plans isn’t known. But in November 2021, the company announced plans to build a massive 300 MW mining facility in West Texas.

Operating in Kazakhstan since 2018, Xive is another native mining company affected by the region’s policy changes — and its team saw this coming. Xive’s founder Didar Bekbau warned about “harsh electricity limits” as early as September 2021 and continued to tweet prolifically about every major development in the government’s fast-moving process of new regulations around mining and energy use. A few months later, in November, Bekbau posted a video on Twitter of his team completely shutting down its mining facility in South Kazakhstan. Xive still runs “mini farms” in other parts of the country though, Bekbau tweeted in December. But his team is actively exploring other areas for new farms, including the U.S.

Were Kazakh Changes Avoidable Or Predictable?

Every country, county and city around the world presents a unique set of regulatory and political risks that Bitcoin miners are forced to weigh. The variable tradeoffs are endless. And Kazakhstan is no exception. Cheap energy, low taxes and a generally friendly government made Kazakhstan a great home to Bitcoin mining for years. But the recent developments that miners are now struggling with aren’t the result of poor strategy or severe miscalculations by miners. Following China’s mining ban, only clairvoyant miners would have known that Kazakhstan was a “bad” option for relocation.

As some miners leave Kazakhstan for the U.S., the comparative advantages of operating in America are clear. The U.S. offers a more stable legal regime, more robust capital markets and a generally more predictable regulatory environment. But the politics, business norms and other dynamics of operating in the U.S. aren’t equally favorable to every miner, especially for some miners who prioritized quickly bringing their machines back online after being evicted from what was previously the world’s largest mining hub.

In short, political favor toward Bitcoin miners can change anywhere at any time. Every jurisdiction carries risk. Xive’s founder understood this when he tweeted a video of his team shutting down one of its Kazakhstan-based farms saying, “Country risk played out.” The best any miner can do is understand the risk they accept and work to mitigate it as much as possible.

The Next Phase Of Kazakh Bitcoin Mining

What Kazakhstan’s mining industry will become in the next year is an open question. A horde of mining companies descended on Kazakhstan with plans for massive mining operations. And now that the government has placed substantial limits on the sizes of new farms and is considering heavier taxes on mining, the country’s once-promising mining boon looks less auspicious.

Some miners are still optimistic though. Bekbau tweeted in January that Kazakhstan will be a long-term “mining harbour” despite recent adverse policy changes. And a double-digit percentage of Bitcoin’s hash rate is nonetheless significant.

But just because Bitcoin’s hash rate is once again setting record highs doesn’t mean every mining organization has also fully recovered. And after leaving China with plans for large-scale operations in Kazakhstan, many big mining companies are still in the process of adjusting to problematic Kazakh policy changes.

This is a guest post by Zack Voell. Opinions expressed are entirely their own and do not necessarily reflect those of BTC Inc or Bitcoin Magazine.

The shock and awe of sanctions on Russia