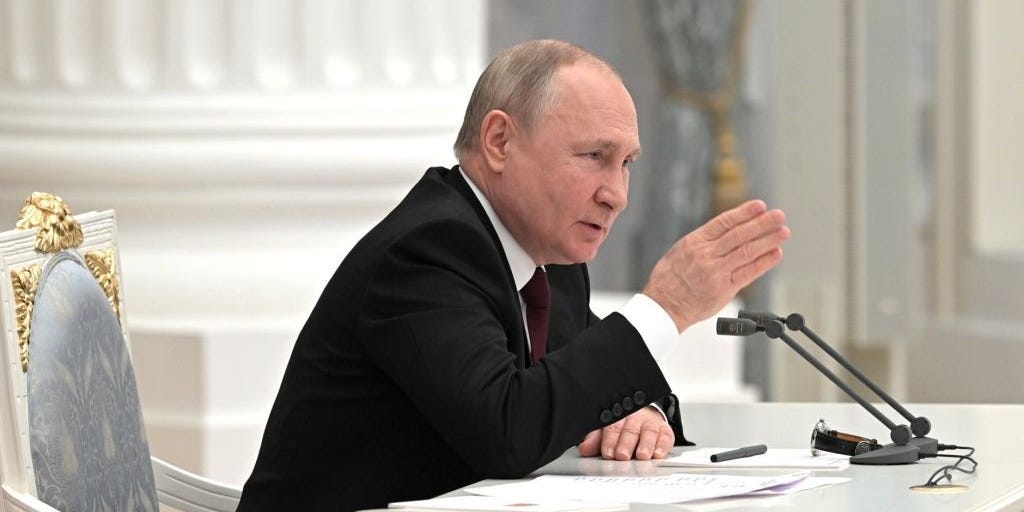 US Debates Whether Putin Is Mad or Putting on an Act Over Ukraine: NYT


US intelligence agencies are urgently debating the possibility that President Vladimir Putin of Russia has lost touch with reality, reported The New York Times Sunday.

It follows a series of erratic public performances by the Russian leader, and gained a new intensity after he increased Russia’s level of nuclear readiness Sunday.

Later, in a paranoid and grievance-filled speech broadcast moments before the launch of Russia’s invasion of Ukraine last week, he sought to re-write history by denying that Ukraine exists as an independent country.

Putin had been previously seen as brutal but a coldly rational actor. Yet some believe that his isolation during the COVID pandemic, when he tightly restricted his interactions with the wider world, may have impacted his sense of reality.

His recent meetings with top officials and foreign leaders have been bizarre spectacles, with the Russian leader seated at one end of a huge table and the dignitaries at another in an apparent bid to keep infection at bay.

“He’s out at his compound, doesn’t come into town very much, and, under Covid, he’s been more isolated,” said Michael McFaul, a former US ambassador to Russia, in a Sunday appearance on NBC’s “Meet The Press.”

James Clapper, the former director of national intelligence, echoed the view in a CNN interview. “I personally think he’s unhinged,” Clapper said. “I worry about his acuity and balance.”

Another school of thought among US intelligence officials, according to the Times, is that Putin’s behavior may be an elaborate bluff.

By this theory, he is acting the part of the madman in order to confuse and disconcert the West. According to the Times report, the assessment is part of a vast array of material being used by President Joe Biden’s administration to judge its response.

It’s a version of President Richard Nixon’s so-called “madman theory,” with the former US president in 1969 bluffing that he was willing to launch a nuclear strike on Vietnam. His hope — which did not come to pass — was that North Vietnamese leaders would quickly come to the negotiating table and end the Vietnam War.

Michael A Horowitz, a security analyst at Le Beck Institute, picked up on the idea. He wrote: “There is a ‘Madman theory’ in international relations, which is basically to intentionally appear irrational – not to say, cray cray – so as to force your adversary to be cautious. If this is what Putin is doing, then he is frighteningly good at it.”

The nature of Putin’s intentions has long been one of the key questions of the Ukraine crisis.

Many western analysts believed wrongly that Putin had been bluffing when he threatened invasion by massing his forces on the Ukrainian border in order to extract security concessions from the West.

Those predictions turned out to be wrong, as last week Putin ordered a full scale invasion, tipping Europe into its gravest security crisis for decades.

Should The Bitcoin Soft Fork Be Buried?

How ESG investors are responding to Russia’s invasion of Ukraine