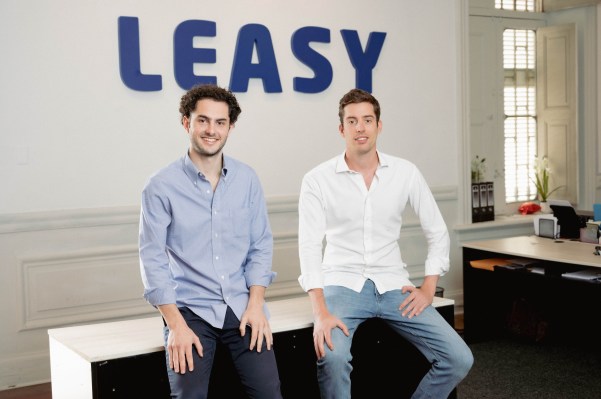 
Leasy, a startup that offers automobile financing to ride-hailing drivers in Latin America via a subscription model, has secured $2 million in equity and $15 million in debt.

Italian-born Gregorio Gilardini and Alejandro Garay, who hails from Spain, met in Peru several years ago and discovered they both had an interest in using technology to make a social impact and help people escape “the poverty trap.”

They founded Leasy in 2018 with the mission to help people who would like to earn incomes as ride-hailing drivers be able to afford cars, thus earning a steady income. Traditional financial institutions charge outrageous interest rates and require hefty down payments, making it nearly impossible for members of a lower-income population to afford to purchase their own car.

Lima-based Leasy is different, said Gilardini, in that its interest rates are far lower and terms much more flexible. It claims that it offers loans that are “built around the needs” of a ride-hailing driver at competitive prices that match rental market prices. It also requires a down payment of 5%, compared to the 20% to 30% required by most banks.

“That’s an amount of cash that most people don’t have,” Garay said. “A lot live day to day and drivers are like ghosts in the system.”

Until now, Leasy was bootstrapped outside of credit lines from Banco de Credito del Peru (BCP) and Mitsui Auto Finance (MAF) – which the founders say they are grateful for because the startup scene in Peru is an evolving one.

Magma Partners led its seed round, and other investors include IncaVentures, BuenTrip Ventures, GRAM, Otto Holdings and Nucleus EMV, among others. It is also part of the Endeavor ScaleUp program. The company sought capital because it realized it “needed to scale with more speed.”

Impressively, Leasy has been profitable — and that means both positive net income and EBITDA positive — since its first month of operation, according to Gilardini, and saw revenue growth of 170% in 2021 compared to 2020. That positive cash position was valuable during the fundraising process, said Gilardini, because it allowed the team to negotiate good terms.

“Coming out of a region where VC investment still has a lot to improve upon, we didn’t have much visibility on how long fundraising would take and couldn’t afford to run out of cash at any point,” he added.

When starting out, the pair was surprised that so many drivers for ride-hailing vehicles were renting because they could not qualify for car financing. For many, it was the only way to be able to have access to the job market they wanted to pursue. And while Leasy started out with rentals and convinced EuroRenting (a Hertz-like company) to be its first pilot, they eventually considered transitioning into car financing with a subscription model.

The structure of the business is designed to make it uncomplicated for ride-hailing drivers to finance a car, with insurance included in the transaction and a “simple” payments process. Flexible terms also take some pressure off. For example, if a driver decides they want to move to another city and no longer need the vehicle, they can return the car to Leasy with no penalty, noted Garay.

In terms of its technology, Gilardini told TechCrunch it has been “quite developed” since the beginning.

“When we went into this, we knew we needed something that was going to be scalable,” he said. “We also recognized we were operating in a very risk-averse region when it comes to credit and that we had to prove how we were mitigating the various risks associated with banking an unbankable person. This actually forced us to have all of our technology down to a T since the beginning.”

Its app for drivers is designed to provide full transparency on how their payments are going and when they need to pay.

“It’s kind of like creating this ecosystem and connection with the drivers so that they feel like they have that support 24/7,” explained Gilardini.

In 2019, Leasy partnered with Uber to find potential drivers to work with and gather data. It is selective in who it finances, and since it is connected to Uber through its APIs, Leasy is able to do background checks and review historical driving and whether they’ve gotten tickets.

Leasy plans to use the data it has collected internally for a predictive analytic model to estimate when people are most likely to default. On the consumer side, they can provide insight on how well they’re driving, how much fuel they have and how much money they’re spending on fuel.

“It’s helping them keep a kind of ledger and make sure they have all the information they need to do a good job and are two steps ahead of their financing,” he added.

In fact, Garay told TechCrunch that Leasy so far has seen 1% churn, or defaults.

“We’re very flexible compared to a bank, and want them to succeed,” he said. “Say they get in a car accident and can’t work for 10 days, we don’t charge them for that time.”

So far, the startup has underwritten over 370 loan contracts and has a waiting list of over 1,500 people. The funds will be used to help the company and aid it in expanding out of its home country of Peru, starting with Mexico and then to markets like Colombia and Chile.

Magma Partners’ Nathan Lustig believes Leasy is solving a “real problem” for Latin Americans who are trying to get access to what is for many their biggest asset.

“A car can help bring Latin Americans into the middle class, and a car owner can use it to generate top 30% incomes for their families,” he said. “Traditional financial institutions overlook huge swathes of Latin Americans.”

The startup’s “great” technology, distribution, customer service and collections combined with its “very strong” unit economics made it an attractive investment, Lustig added.

“They fit the pattern of successful founders who start out in Latin America’s overlooked markets like Peru, Ecuador, Chile and Uruguay who are likely to have success expanding to Latin America’s bigger countries,” he said.

Last August, TechCrunch reported on the $104 million raise of Brazilian startup Kovi, which has a similar mission to Leasy.

It too operates a car subscription model under the premise that more people in Latin America would work for ride-hailing companies if they could afford to operate the necessary vehicle.

Retails Gets Back On Track Following Geopolitical Sell-Off