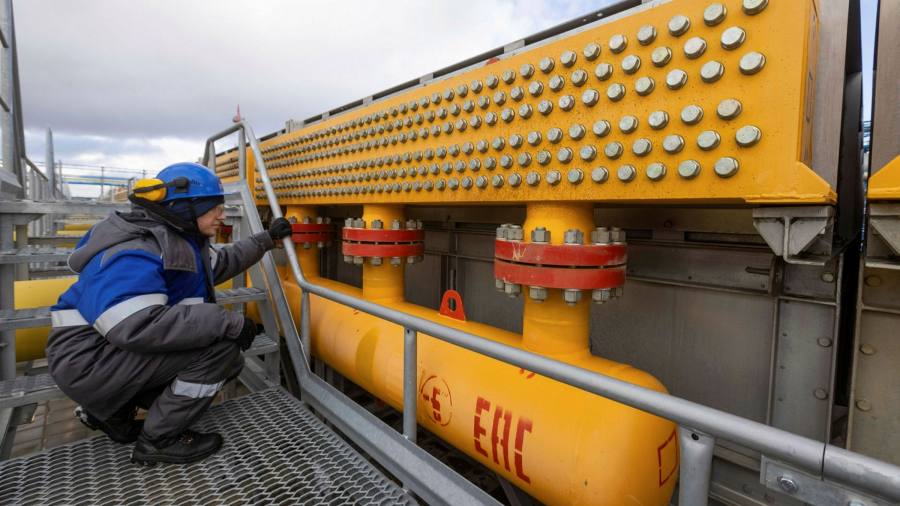 
Gas prices in the UK and continental Europe dropped more than a fifth on Friday on relief that western sanctions had not dealt a crippling blow to Russia’s ability to sell energy and other commodities.

Russia supplies about 40 per cent of Europe’s gas supplies, and concerns that flows could be disrupted after Moscow’s invasion of Ukraine saw the price surge almost 70 per cent on Thursday.

But prices cooled on Friday as traders analysed US president Joe Biden’s decision to include in his sanctions package a carve-out for energy payments, a crucial source of revenue for Moscow.

“Biden was careful to explain that he was not sanctioning the Russian export of energy,” said David Aserkoff, analyst at JPMorgan. “His speech was at pains to say that while the goal was to damage the Russian economy, he sought to limit the impact on petrol prices and implicitly other commodities as well. This was also consistent with the view that sanctions are supposed to hurt the enemy, not oneself.”

Futures linked to TTF, Europe’s wholesale gas price, fell 25 per cent to €101 per megawatt hour, having traded above €140 on Thursday, while the UK equivalent was down 23 per cent at 246p per therm.

The fall came as Russian gas flows to Europe increased on Friday after European utility companies ordered more of the fossil fuel, which is used to heat homes and burned in power stations to generate electricity.

However, analysts said this did not reflect a change in strategy by Russia’s state-run gas exporter Gazprom, which is still not making additional volumes available or filling their own storage facilities in Europe.

They said European utility companies were ordering more gas under their long-term contracts with the Russian supplier because the structure of those agreements meant it was at present cheaper to nominate maximum volumes from Gazprom than to buy in the spot market.

A small amount of Russian gas is also set to flow to Europe through Poland for the first time in weeks said Tom Marzec-Manser, head of gas analytics at ICIS, a consultancy.

“We are seeing buyers across Europe wanting more gas from Russia [under long term contracts] than we have seen in a long time and that’s because the economics are favourable,” he said. “What’s interesting is that Gazprom is choosing to use the Yamal-Europe pipeline [via Poland] rather than send even more gas through Ukraine.”

Gazprom’s policy of only fulfilling its contractual obligations and not selling in the spot market has been one of the key factors in driving gas up prices from €16 a year ago to a record above €180 before Christmas. That extraordinary surge has driven up energy bills for households and industry across the continent and added to inflationary pressures.

Oil prices, which on Thursday rose above $105 a barrel for the first time since 2014, were also weaker on Friday. Brent crude dipped to about $98.18 a barrel.

Russian exports account for between 6 and 7 per cent of global oil supplies, and concern about the impact of sanctions pushed the country’s flagship Urals grade trade at a record discount of more than $11 a barrel as buyers steered clear.

“The Biden administration sanctions package was designed to have limited immediate impact on oil and gas flows, but don’t underestimate the level of self-sanctioning occurring in the market,” said Ben Luckock, co-head of oil trading at Trafigura, one of the world’s biggest commodity traders.

Some refiners and shipowners were now “actively choosing to not buy Russian barrels or call at Russian ports”, he added. The cost of chartering a ship to carry crude oil from the Black Sea to Europe has also rocketed, making Russian barrels less attractive versus other grades.

The Russian invasion of Ukraine has spooked oil markets because the market is already tight. Supply has struggled to keep up with resurgent demand as lockdown restrictions have eased.

As such, some traders believe escalating tensions with Russia would increase the urgency for the US to agree a deal with Iran on its nuclear programme.

“There have been some indications of progress,” said Amarpreet Singh, oil strategist at Barclays. However, Iran’s demand for a guarantee that future US administrations do not renege on the deal “is still a sticking point”.