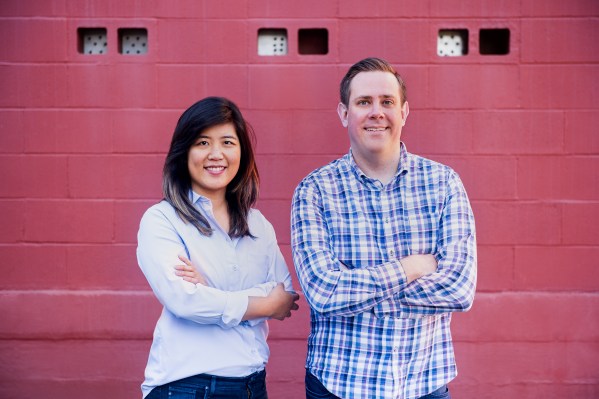 
As an engineering program manager at Apple, Gloria Lin was part of a group that conceptualized and built initial prototypes for what is now Apple Pay.

She moved on from the tech behemoth to become the seventh employee at Flipboard. As head of product at the news aggregator, Lin led the growth of Flipboard’s user base from zero to more than 100 million users across 14 international markets.

After taking a year off to travel, Lin went on to become Stripe’s first product management hire and worked on a variety of products, including Stripe Checkout, Stripe Dashboard and internal risk and identity systems.

But long before she worked in the technology industry, Lin was the daughter of the owner of a trade contracting business. The challenges her father faced as a business owner in the construction industry always stayed in the back of her mind, so when Lin got the entrepreneurial itch, it was a natural move to help start a company that helped trade contractors better control their finances. And today that company, Siteline, is emerging from stealth with $18.4 million in funding — $15 million of which was raised in a Series A led by Menlo Ventures and $3.4 million that was raised in a seed round led by Brick & Mortar Ventures and First Round Capital.

In general, Lin — who got a master’s degree in electrical engineering from Stanford University — admits that she “loves building fintech infrastructure at scale.” Working on the earliest versions of Apple Pay and being the first product manager at Stripe gave her the experience and confidence to branch out on her own and start Siteline in June 2019 with Joel Poloney, who serves as the company’s CTO. Poloney previously worked at Google, Zynga and Toro.

“I saw an opportunity to take a lot of what I learned about building incredibly easy to use, powerful and delightful financial systems at scale to a brand new industry that has existed for a long time, which is construction,” Lin told TechCrunch. “Construction is one of those large industries that impacts how we all live, but it really hasn’t caught the wave of fintech and cloud computing, and generally hasn’t been as digitized as other sectors.”

In fact, according to a report from McKinsey, the construction industry is one of the least digitized in the world. And those lags spill over into the time it takes for contractors to get paid. According to a recent PricewaterhouseCoopers report, the median time to get paid in construction is 90 days, putting the sector in last place behind pharmaceuticals and life sciences.

Trade contractors in particular often have to pay for labor and materials out of pocket before they get paid months later.

“So they’re always stuck in the negative working capital cycles,” Lin noted. “Meanwhile, the workflow itself is a manual, fragmented process that hasn’t changed in decades. And it has to be really precise at the same time. So even a single misplaced cent in the way that you’re invoicing can cause a further delay in payments, which is even more painful because you’re already getting paid so late compared to other industries. And so it’s this huge burden for trade contractors to compile billing packages in order to get paid every month, with a lot of documentation and compliance requirements.”

For contractors, the lack of a consistent cash flow can cause delays in gaining new business and completing projects in general. Put simply, Siteline’s aim is to give contractors an easy way to get paid faster and more easily with its technology. By using Siteline, trade contractors are able to do things like compile accurate payment applications, manage compliance documents and monitor payment status on one “customizable” platform, according to Lin. This means they can get paid faster, with the company estimating that its technology can speed up internal billing processes by up to 6x while also improving collaboration across project and finance teams.

“Getting paid in construction is a huge hassle, and that makes cash flow harder to manage,” Lin said. “Ultimately, we want to empower builders to make better business decisions, by transforming a painful payments process into a powerhouse of financial data…And, my personal mission is to make life easier for millions of hard working people like my dad.”

Today, Siteline processes more than $180 million in annualized billing for its customers, including projects ranging from office campuses and schools to major airport terminals and hospital wings. It currently supports hundreds of commercial projects across the U.S.

The company plans to use its new funding to expand its sales, marketing, recruiting, engineering and product teams.

Tyler Sosin, who led the Siteline investment on behalf of Menlo Ventures, describes himself as an active investor in construction technology. He believes that Siteline can “solve the payments problem” for trade contractors, which is the largest segment of the construction workforce.

“Financial fragility remains one of the biggest unsolved problems for this industry,” he said. “Construction is a sprawling, complex business pressured by working capital issues and significant counterparty risks. The workforce needs better tools and processes to manage business financials and liquidity, ensuring more stability across the system.”

Menlo had actually been watching the company for over a year and “saw some of the incremental momentum in the business” at the product level, according to Sosin, who is joining the company’s board.

“We saw Gloria’s confidence around product market fit and Siteline’s understanding of an industry that historically has been a little bit of a luddite in terms of adopting technology,” he added. “So when it really started to feel like she [Lin] had confidence around being able to sell this product in the market and was getting really good feedback from some contractors, we leaned in and said, ‘Hey, we’d love to do something here.’”

Looking ahead, Lin envisions Siteline expanding to more constituencies and more products “with the vision of building a modern construction finance platform for more than a trillion dollars in payments.”

Designer Fund, South Park Commons Fund, and a number of angels also participated in the Series A financing. Dustin DeVan, founder of BuildingConnected, will become a company advisor.

My weekly fintech newsletter is launching soon! Sign up here to get it in your inbox.