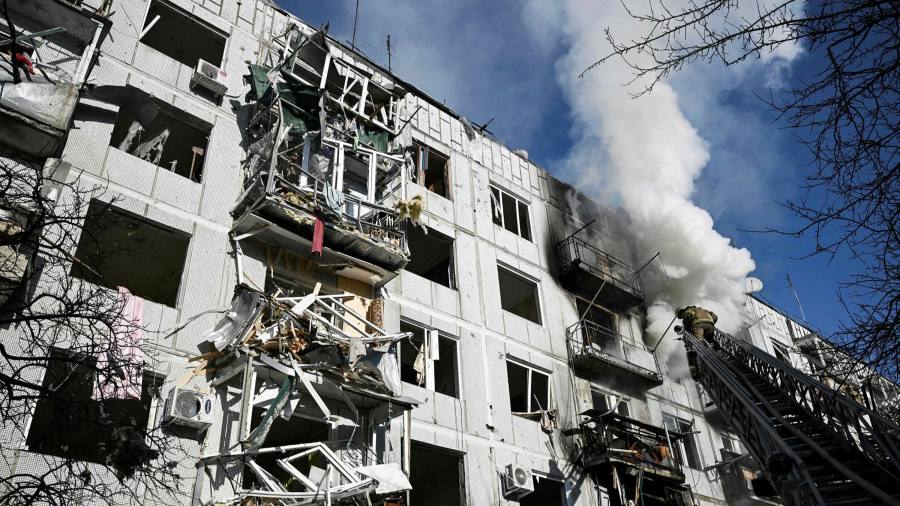 Vladimir Putin has launched a full-scale military invasion of Ukraine and demanded Kyiv’s army lay down its weapons, starting what could be the largest conflict in Europe since the second world war.

With bombardments of artillery, heavy equipment and small arms, Russian troops launched attacks from Ukraine’s northern border with Belarus, across its eastern frontier with Russia, and in the south from Crimea, the Ukrainian peninsula Russia invaded and annexed in 2014.

Soon after, Ukrainian authorities reported columns of Russian tanks and armoured vehicles driving into the country from all three fronts. Roads out of Kyiv were gridlocked with civilians fleeing the capital.

In an address on state television shortly before 6am on Thursday, Russia’s president said Moscow would seek to “de-Nazify” Ukraine and “defend” victims of “genocide”, despite there being no evidence of such crimes.

FT.com has the latest news on the Ukraine conflict.

Thanks for reading FirstFT Americas. Share your questions about the Ukraine crisis at firstft@ft.com — Wai Kwen

1. Manhattan prosecutors leading criminal probe of Donald Trump resign The departures raise questions about whether the district attorney’s investigation of the ex-president is winding down.

2. Ex-Goldman Sachs banker’s 1MDB trial to be paused on new evidence disclosure In the second week of Roger Ng’s case, prosecutors reveal an ‘inexcusable’ omission of about 15,500 documents.

4. JPMorgan ‘grossly negligent’ in Nigerian bank transfers The US bank was “grossly negligent” in paying almost $900mn to a company controlled by a former Nigerian minister with a money laundering conviction, despite numerous “red flags” about the transactions, a UK court has been told.

EU summit in Brussels EU leaders are planning to discuss the escalating crisis in Ukraine. Charles Michel, European Council president, said he wanted to meet to “jointly define our collective approach and actions”.

Join Financial Times journalists and leading experts on February 25 at 1300 GMT for an unmissable virtual briefing, Russia-Ukraine Conflict: What Next? Register free here.

Italy’s public debt dilemma The country’s public debt is extremely high. There are two ways of looking at it: one is to say that it will pose a threat to the stability of the eurozone, the other is to say that what matters is the cost of servicing it. What is clear is that growth, reform and the European Central Bank’s support is crucial to sustainability, writes Tony Barber.

VW’s complex planned Porsche IPO The German group’s management board had no control over the timing of a confirmation that it planned to list part of its crown jewel, Porsche. Instead, the drip-feed of rumours forced the carmaker to rush out a statement. But investors fear the proposed €20bn listing may lead to a repeat of past mistakes.

Why a tribal work life might be good As we return to the office, it is worth considering how Covid-19 lockdowns have increased our tendency to be tribal beings. While companies don’t like to admit to it, small teams tend to be more efficient than unstructured groups, writes Gillian Tett.

The rise of ‘wellness’ apartments For some, “wellness” is not merely an ill-defined buzzword, it’s a way of life. And property developers have been rushing to cash in. By one estimate, there are more than 2,300 “wellness residential projects” around the world. But buyers face hefty premiums.

What does our obsession with taking pictures say about humanity? An exhilarating New York exhibition ‘A Trillion Sunsets’ interrogates image overload.

Time To Scoop Up Chewy Stock