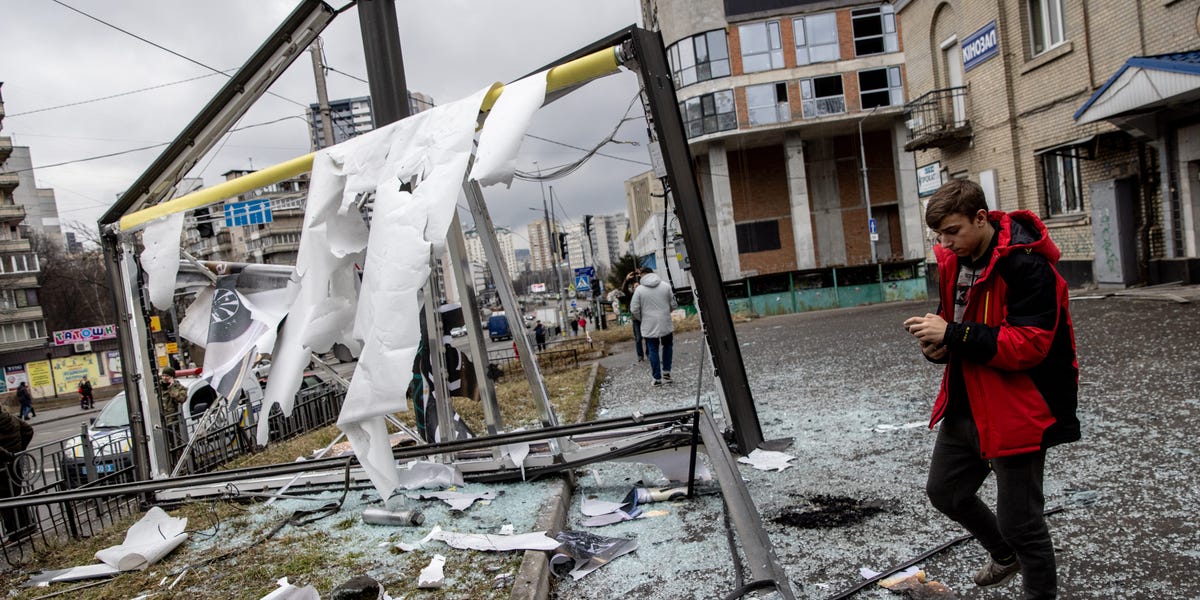 
Russian forces invaded Ukraine by land, air, and sea on Thursday morning, in what NATO Secretary-General Jens Stoltenberg condemned as a “brutal act of war.”

People across Ukraine were jolted from their sleep by the sounds of sirens and explosions as Russian airstrikes hit the country’s capital and several other cities.

Several eyewitnesses told Insider this was their first realization that a full-scale invasion was underway.

In Kyiv, Ukraine’s capital city, the airstrikes started before dawn, and across the capital city of three million people, the sound of explosions, gunfire, and sirens was heard, Reuters reported.

“I woke up at five in the morning to the sounds of the blasts,” said Ivanna Klympush, an MP with the European Solidarity party, speaking to Insider from her home in Kyiv. “We all did.”

Bryan Stern from Project Dynamo, a group helping evacuate American citizens out of Ukraine, told Insider that his “entire room shook” when a missile landed near his hotel room in downtown Kyiv. “It was pretty intense,” he said.

Witnesses have also reported missile blasts in several other cities, including Kramatorsk, Dnipro, and Odessa, per reports.

Makama Ezekial, a South African living in Kharkiv, told Insider the “crashing sounds” of missiles exploding made him jump out of bed. Ezekial immediately went to find his children, he said, because he became afraid for their safety.

His children were fine. But, according to Reuters, a boy was killed in Kharkiv after shelling struck an apartment complex, emergency services said.

In Odessa, a picturesque tourist hub in the southwest of Ukraine, a local journalist told Insider that he heard “roughly 20 rockets” explode near his home on Thursday morning.

“Then we saw the smoke from the balcony,” said Ugo Poletti, the editor-in-chief of the Odessa Journal.

But despite the “scary scenario,” Poletti said the citizens of Odessa appeared to be “quite calm.”

Yosri Lahouar, a Tunisian living in Ukraine, was also struck by the calmness of the locals in Odessa.

A missile landed about 10 meters away from Lahouar’s apartment, he told Insider. He immediately grabbed his backpack and ran out on the streets to find shelter, as smoke engulfed him, Lahouar said.

Then, 10 minutes later, he continued, there was another explosion nearby. “I was on the ground and I started to cry,” he said.

But, Lahouar explained, his reaction stood out from the crowd. “When I looked around, everyone was walking around normally, like nothing had happened,” he said. “I was surprised.”

The explosions, Lahouar said, were a moment of clarity for him. “At first, I was one of the voices who thought that war would never happen,” he told Insider. But as of this morning, he said, he had to come to terms with the fact that he’s living in a “war zone.”