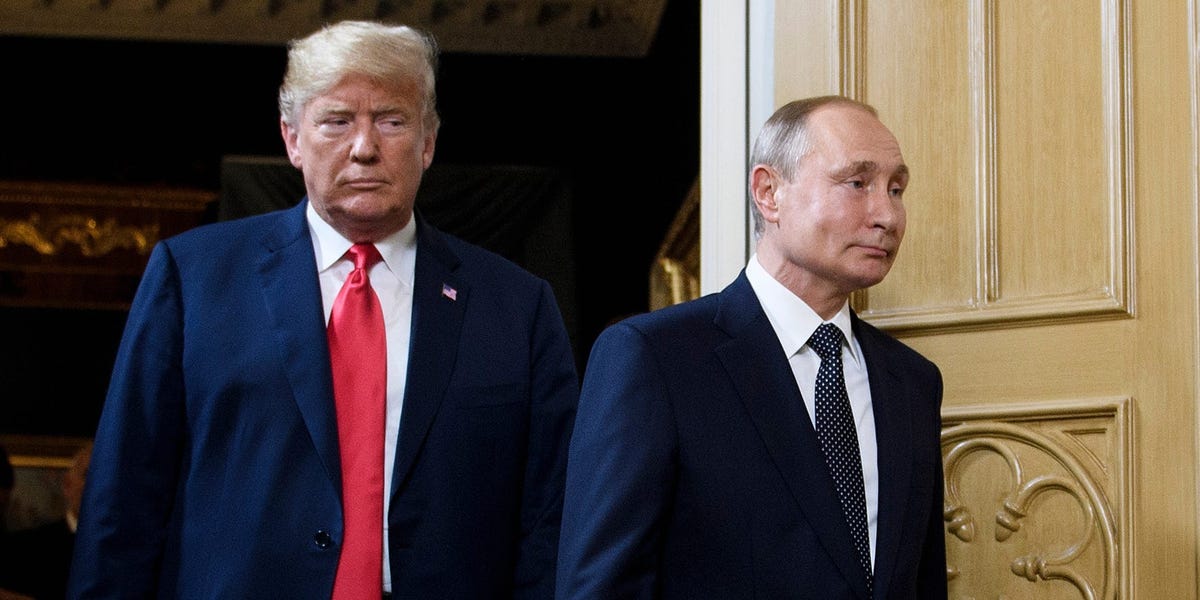 Putin’s Justification to Invade Ukraine Is ‘Genius’ and ‘Savvy’

In an appearance on the “Clay Travis and Buck Sexton Show,” Trump said that Putin’s recognition of the independence of the Ukrainian breakaway republics of Donetsk and Luhansk — two-thirds of which are still controlled by Ukraine and are not recognized by most other nations but are backed by Russia — was a smart move.

“I went in yesterday and there was a television screen, and I said, ‘This is genius.’ Putin declares a big portion of the Ukraine — of Ukraine. Putin declares it as independent. Oh, that’s wonderful,” Trump said when asked about the news. “I said, ‘How smart is that?’ And he’s going to go in and be a peacekeeper.”

Trump claimed that the reason the Russian president chose to invade Ukraine now — rather than during his own presidency — is because he had a better relationship with Putin than President Joe Biden does.

“I knew Putin very well. I got along with him great. He liked me. I liked him,” Trump said. “I mean, you know, he’s a tough cookie, got a lot of the great charm and a lot of pride. But the way he — and he loves his country, you know? He loves his country.”

Asked what went wrong with respect to Ukraine, Trump repeated his long-standing and false claims that the 2020 presidential election was stolen from him.

“Well, what went wrong was a rigged election and what went wrong is a candidate that shouldn’t be there and a man that has no concept of what he’s doing,” Trump said, later adding that an invasion “never would have happened with us. Had I been in office, not even thinkable. This would never have happened.”

Trump also tied the situation in Ukraine to longstanding conservative grievances about immigration, saying that the US should use military force akin to that used by Russia to ensure security along the US-Mexico border.

“We could use that on our southern border. That’s the strongest peace force I’ve ever seen. There were more army tanks than I’ve ever seen,” Trump said. “They’re gonna keep peace all right. No, but think of it. Here’s a guy who’s very savvy … I know him very well — very, very well.”

And when asked about whether he’s concerned about the US becoming militarily involved in a conflict in Ukraine — which the US has resisted thus far — Trump again brought up the US-Mexico border.

“I’d rather see them send soldiers to our southern border,” he said, referring to US troops. “I don’t like the idea he’s sending a small number of troops.”

Trump also claimed that the US has not responded forcefully enough to the Russia-Ukraine conflict.

“It’s a joke compared to what the other side does. You know, he sends 3,000 troops. I heard this morning, 3,000 troops. What’s that going to do except get in trouble?” Trump said. “No, I would like to see our southern border protected and they are handling Ukraine so badly.”

Trump also said that he used to discuss Ukraine with Putin when he was president, adding that the Russian leader “always wanted” to invade its neighbor.

“I knew that he always wanted Ukraine. I used to talk to him about it. I said, ‘You can’t do it. You’re not going to do it.’ But I could see that he wanted it. I used to ask him. We used to talk about it at length,” Trump said.

This story will be updated.