Next Leg Up For Gold Stocks

Gold broke out of its triangle and reached $1900. It was able to lift the gold stocks up and away from critical support.

After three tests, GDX held support at $29-$30 and rebounded to an eight-month high near $35. GDXJ has lagged but has the potential makings of a double bottom. 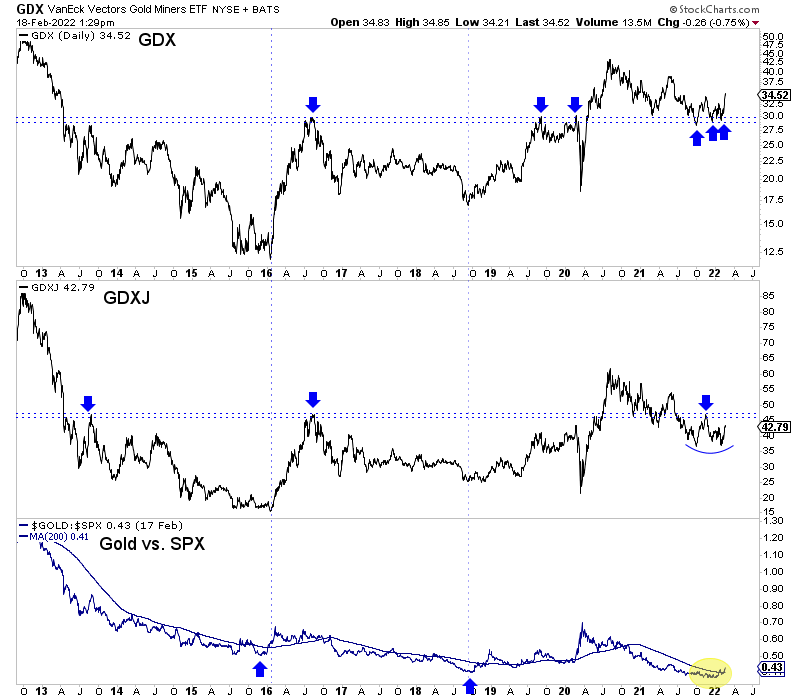 At the bottom of the chart, we plot the versus ratio, which could be emerging from a major low. The ratio may need more time or could retest its low, but a sustained rebound would ultimately coincide with the next leg higher in precious metals.

The relative strength in Gold and the largest gold stocks is evidence that the very big money has dipped into precious metals.

GDX relative to GDXJ is at a 21-month high. Newmont Gold (NYSE:) and Franco-Nevada (NYSE:) are trading around their August 2020 peaks, while GDX and GDXJ are roughly 20% and 30% off that peak.

Most miners have lagged Gold and performed poorly because costs have increased over the past 18 months, and the Gold price is down. Margins have contracted quite a bit more than the Gold price.

Hence, the monthly and quarterly resistance at $1900 Gold is critical. Breaking that is the key to unleashing a sustained move higher in Gold but also in the miners, juniors, and .

Miner margins would expand, and so would their appetite for acquisitions while industry capital flows down the food chain.

Until that break occurs, we should buy weakness in the best juniors.

FirstFT: Biden and Putin agree ‘in principle’ to Ukraine summit