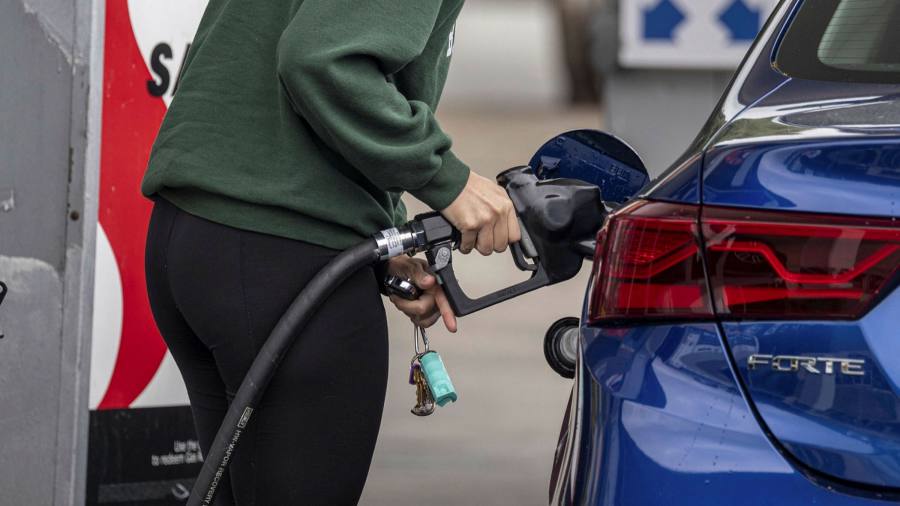 
The White House is open to temporarily suspending the gas tax, after a high-profile group of Democratic lawmakers proposed scrapping the federal levy on petrol until at least next year in an effort to curb rising inflation.

“Every tool is on the table to reduce prices,” said Emilie Simons, White House assistant press secretary. “The president already announced a historic release of 50mn barrels from the strategic petroleum reserve, and all options are on the table looking ahead.”

Democrats Maggie Hassan of New Hampshire and Mark Kelly of Arizona last week introduced the Gas Prices Relief Act, a bill that would temporarily suspend the federal gas tax through the end of the year. The current tax imposes a levy of 18.4 cents per gallon on petrol. The proposed legislation would also stipulate that the Treasury department make sure savings were passed on to consumers, rather than clawed back by companies.

The Washington Post first reported that the White House’s National Economic Council was reviewing the idea.

The move would be a big blow to Joe Biden’s climate agenda; the president had vowed to boost electric vehicle ownership and reduce Americans’ dependence on fossil fuels. But it comes as Biden confronts dismal approval ratings and Democrats on Capitol Hill fret about their political prospects heading into November’s crucial midterm elections, when both chambers of Congress are up for grabs.

Hassan and Kelly are both facing tough re-election battles in November. Their legislation was co-sponsored by several other vulnerable Democratic lawmakers, including Georgia’s Raphael Warnock and Catherine Cortez Masto of Nevada.

Warnock said the bill was the “latest effort to help working and middle class families overcome the economic pressures of the pandemic”.

Democratic senators discussed the gas tax holiday proposal and other ways to address rising consumer costs at their weekly caucus meeting on Tuesday, but not all lawmakers were on board with the idea.

Joe Manchin, the conservative Democratic senator from West Virginia who has frequently broken with his party, told reporters on Capitol Hill that suspending the tax did not “make sense”. Meanwhile, Republican moderates including Mitt Romney and Lisa Murkowski, who sometimes bolster Democrats’ numbers in a precariously divided Senate, also signalled their opposition to the bill.

The latest Bureau of Labor Statistics data showed US consumer prices rose 7.5 per cent last month compared with January last year — the fastest annual pace in 40 years. Average petrol prices nationally have jumped to $3.50 a gallon as of Tuesday, according to the AAA, an automobile association, their highest level in more than seven years.

The rise in gas prices comes on the back of a steady escalation in crude prices over the past two years as global consumption has bounced back quicker than supplies in the wake of the pandemic.

West Texas Intermediate, the US crude benchmark, rose above $95 a barrel this week for the first time since 2014. It has since receded to roughly $91.50 on hopes of a de-escalation of the Ukraine crisis.

The Biden administration has already sought to employ various tactics to tackle high prices at the pump, but with limited results.

In November, the White House announced the release of 50mn barrels of crude from the country’s strategic petroleum reserve in an effort to ease tight supply. Prices retreated before ultimately resuming their upward trajectory.

The White House has also leaned on US producers to increase production, which has yet to recover to its pre-pandemic levels, despite the high prices. But large operators on a tight leash from Wall Street have so far largely held off ramping up supply, arguing investors were insisting on capital discipline.

Analysts expressed scepticism that a suspension of the gas tax would have any lasting effect on prices.

“While it’s significant in that politicians continue to address the high prices, the [federal gas tax] is actually one of the smaller costs in gasoline,” said Patrick De Haan at Gas Buddy, a price tracking service, noting that suspending the levy would represent a just a 5 per cent discount to the current national average price.

“It’s a nothing burger, a blip,” said McNally. “Crude price changes will quickly overshadow it and I’m not sure that an 18 to 19 cent decline is really going to matter from the consumer perspective.”