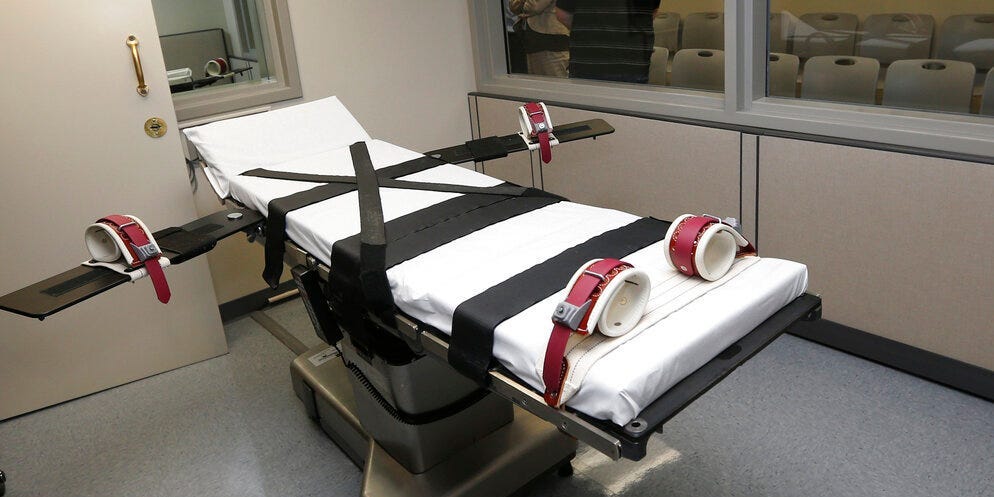 Jim Stronski, attorney for the condemned inmates, Donald Grant and Gilbert Postelle, told The Associated Press, “While it may be gruesome to look at, we all agree it will be quicker.“

After Postelle’s scheduled execution, a lawsuit brought by 26 death row inmates to a federal court will commence determining the constitutionality of the three-drug lethal injection method — starting on February 28.

Botched executions and questions of constitutionality

Experts warn that botched lethal injections executions, which can cause agonizing pain, could be a violation of the 8th Amendment ban on cruel and unusual punishment.

“It’s been likened to the sensation of waterboarding, suffocation, and exposure to chemical fire,” Robert Dunham, director of the Death Penalty Information Center, told Insider. “That is not the peaceful passing that lethal injection had been advertised to be.”

Between 1977 and 2010, the country’s botched lethal injection rate was 7% — compared to 0% for firing squad executions, 1.92% for electrocutions, 3.12% for hangings, and 5.4% for lethal gassings between 1900 and 2010, according to legal scholar Austin Sarat, a professor at Amherst College and author of several books including “Gruesome Spectacles: Botched Executions and America’s Death Penalty.”

“It raises very serious questions as to whether it’s constitutional, and even more serious moral and policy questions about whether it should ever be used,” Durham said of execution by lethal injection.

Since 1977, the three-drug lethal injection protocol has become the dominant method of carrying out capital punishment in the United States. Of the 54 other countries that also utilize the death penalty, at least six were using lethal injection as of 2014.

The three-drug cocktail originally held sodium thiopental or pentobarbital as the first drug and the anesthetic — both barbiturates capable of putting a person in a coma and often used as pre-operation anesthesia. It also includes a paralytic agent, and, finally, potassium chloride, which causes the heart to stop beating, according to Death Penalty Information Center.

After pharmaceutical companies that supplied the anesthetic drugs later stopped selling them for execution purposes — causing a shortage around 2010 — states ultimately had to choose between delaying their capital punishments or finding new drugs.

Midazolam, a sedative used to quell anxiety not cleared by the Federal Drug Administration for use as an anesthetic, then became the primary drug, according to NPR. The drug was used in Oklahoma’s botched lethal injections of Clayton Lockett in 2014 and Charles Warner in 2015.

Lockett’s execution took nearly 45 minutes as he “writhed and groaned” on the gurney. During Warner’s execution, executioners dosed him with the incorrect drug — potassium acetate instead of potassium chloride. His last words were: “My body is on fire.”

Oklahoma paused executions indefinitely in 2015 after discovering that the wrong drug was used on Warner. But, in a 5-3 opinion, the Supreme Court allowed Oklahoma to resume executions in October 2021 following an appeal by the state.

It’s not just Oklahoma, execution by lethal injection is used in 27 states and by the federal government — though President Joe Biden’s administration has halted federal executions after former President Donald Trump restarted them interrupting a 17-year hiatus and executing 13 people.

In terms of the global view of the practice, a spokesperson for the United Nations Human Rights Council told Insider that the UN opposes the death penalty in general, but also calls “on state authorities to comprehensively review execution protocols to ensure that any method used does not violate the prohibition on torture and cruel, inhuman or degrading treatment established in international treaties ratified by the US.”