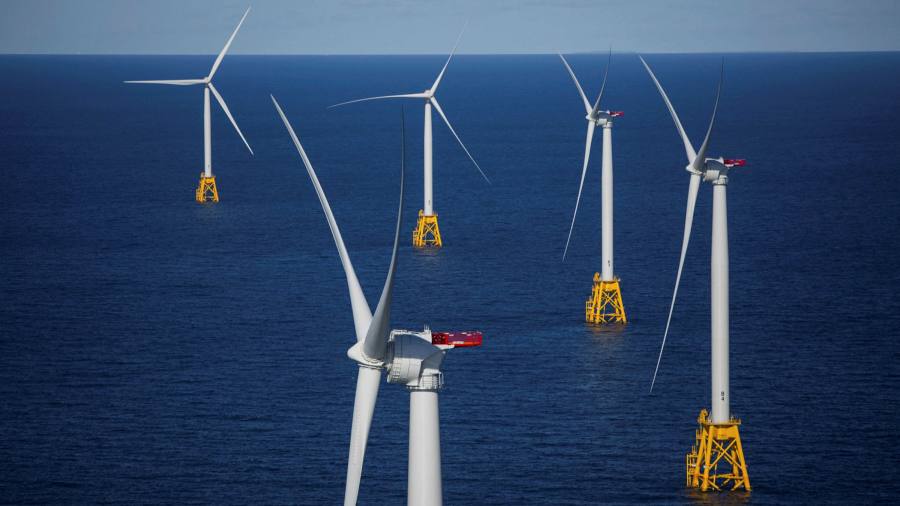 We have a rich edition for you today. President Joe Biden’s bid to buoy America’s nascent offshore wind industry, which has lagged far behind Europe, is showing signs of paying off. There are now enough projects in the pipeline to meet his goal of 30GW of capacity by 2030, although hitting that target in time remains a stretch. That’s the topic of our first note.

Next, we pick up on the latest efforts from the Biden administration to cool prices at the pump: suspending the gas tax. Biden, a self-professed car guy, recognises the political peril posed by rising fuel costs but has few useful tools at his disposal to tame inflation on the forecourt.

Our third item is on oil’s war premium. Crude prices are teetering and tottering along with the latest Russian troop movements (or non-movement) along Ukraine’s border. Expect that to continue.

Finally, Data Drill shows that despite some landmark victories (think ExxonMobil) activist investors had fewer ESG wins at big energy companies in 2021 than in 2020.

The challenges in increasing US offshore wind capacity

America’s pipeline of offshore wind projects is filling up quickly as the Biden administration tries to kickstart an industry that has grown much more slowly in the US than it has in Europe.

There are now 30.7GW of offshore wind projects in development, putting President Joe Biden’s ambitions of having 30GW of capacity installed by 2030 potentially in reach, according to fresh analysis from S&P Global Market Intelligence.

Hitting Biden’s target remains a stretch, though. The only offshore wind farm producing power in the US today is the Block Island project off the state of Rhode Island, which has just 0.3GW of capacity. The S&P analysts also point out there is a “time crunch” in meeting the goal: well over half the projects that are currently in development are due onstream in the latter half of the decade or are still without a startup date.

Some growing pains have already been evident. Early projects have suffered lengthy delays due to permitting hang-ups and local opposition. Surging inflation, especially on products like steel, threatens the profitability of early-stage projects. The construction of a new domestic supply chain — including installation vessels for massive offshore turbines — is also proving costlier than expected and raising the industry’s ire.

Mads Nipper, the chief executive of Denmark’s Orsted, which has the largest portfolio of US offshore wind projects, told analysts earlier this month that the company’s inflation exposure was highest in the US because that’s “where we are building an entirely new supply chain, a new set-up.”

“We want to be a driver of the US offshore portfolio and lead that 30 by 30 ambition. But [inflation] is something that is putting pressure in general on the industry,” said Nipper, referring to Biden’s goal to install 30GW of wind capacity by 2030.

He said passing the “green parts” of the Build Back Better legislation, which include tax breaks and other incentives for offshore wind, was also “very important” to keeping the industry’s momentum moving forward. Yet Build Back Better remains stuck in Congress without a clear path forward after Senator Joe Manchin torpedoed his party’s efforts to pass the law.

Orsted has 6.3GW of projects in its portfolio, followed by Spain’s Iberdrola, American utility Dominion Energy, the UK’s BP and Norway’s Equinor — a split that reflects the leading role European companies are playing in the early build-out of America’s offshore wind sector.

Next Wednesday, it will put up for auction nearly half a million acres off the coasts of New York and New Jersey, which have the potential to host as much as 7GW of new projects, according to US regulators. Twenty-five companies, including Orsted, Shell and BP, have lined up to place bids.

It is the first in what is expected to be a series of auctions in the coming years that will open vast stretches of waters off the American eastern, gulf and west coasts to new wind development. (Justin Jacobs)

How much would a gas tax break help American drivers?

US petrol is now selling for more than $3.50 a gallon, another milestone in a rally that has more juice in it yet, given the upwards march of crude prices.

An 8 per cent year-on-year rise in gasoline demand over the past four weeks, as the Energy Information Administration reported yesterday, is another underlying bullish force. As Myles and I wrote yesterday it’s a problem for Biden, whose latest response is to consider a gasoline tax break.

We spoke to a range of activists and industry experts to get a taste of what they think is most important to consider right now:

1. Biden’s progressive backers wanted him to focus on climate

“Time and time again our government continues to cater to fossil fuel corporations that are exacerbating the climate crisis,” Eden Alem, a spokesperson for the Sunrise Movement, told ES. “The problem here is profit-gouging oil companies. If the Biden administration wants to protect consumers and the planet, it should address the root cause of this crisis, which is our dependence on fossil fuels.”

3. A gasoline tax cut may not provide much relief

The proposed 18.4 cents a gallon tax break won’t make drivers rich. Patrick De Haan at GasBuddy says the tax relief would amount to about 5 per cent off the price to fill up. That’s about $2 off a full tank for a passenger car or $6 for a pickup truck.

“A 5 per cent discount doesn’t get much traction,” De Haan said.

US gasoline prices are up 50 per cent since Biden came to office — but as readers in Europe will know, American petrol is still cheap, and any discount would be in line with gasoline tax cuts offered elsewhere.

“Basically, what we’re hearing from Biden is very much in line with what we’re seeing across the world,” said Paasha Mahdavi, a professor at University of California Santa Barbara.

Despite efforts to deter fossil fuel consumption — or calls to raise prices in a bid to do so — “collectively governments around the world have decreased fuel prices by roughly 5% per year”, he said.

4. Biden is trying to address a problem that is out of his control

“There’s not really many levers right now, because this is global,” said Tom Kloza at Opis. “This is not US inflation. This is global inflation.”

Oil prices move in line with the Ukraine crisis

Hopes of a de-escalation in the Ukrainian crisis have ebbed and flowed in recent days. So too has the price of oil.

Vladimir Putin on Tuesday said Russia would “partially withdraw forces” from the Ukrainian border to allow for talks with the west to continue. Videos released by the Russian defence ministry showed tanks crossing snow-covered fields and being loaded on to railway cars.

Brent crude, the international oil benchmark, tumbled almost 5 per cent to $92 a barrel.

But the respite in the market was short-lived. Oil recouped most of its losses yesterday as western leaders expressed scepticism over the Russian claims.

Nato secretary general Jens Stoltenberg said Moscow was continuing to amass troops on the border and that the security alliance was “prepared for the worst”.

“We have not seen any de-escalation,” Stoltenberg said at a meeting of Nato defence ministers in Brussels. “We see they have increased the number of troops and more troops are on their way.”

Meanwhile, the chief executive of Santos, one of Australia’s biggest liquified natural gas groups, said his company would be unable to plug the gap should Russia sever gas supplies to Europe. (Myles McCormick)

Activist investors grabbed headlines in 2021 with landmark victories against oil supermajors like Exxon, Shell, and Glencore. Despite last year’s successful campaigns, the number of board seats activists gained at energy companies stood at a record low, according to a new report from Insightia.

In 2021, activists won 20 board seats at energy companies globally, a 33 per cent drop from 2020, according to the report. Half of the board seats gained last year were in the US, where the value for activist investments in the energy sector increased 66 per cent year-over-year.

Environmental, social, and governance proposals were among the most common campaign types at energy companies in 2021, making up 43 per cent of campaigns worldwide, up from 27 per cent in 2020. Calls for break-ups also increased, according to Insightia. Last October, activist hedge fund Third Point urged Shell to split up its renewable and oil and gas operations.

The company sees “ample room” for activist campaigns in 2022, but with oil demand ramping back up and prices over $90 a barrel, activists remain doubtful the industry will abide by the demands of shareholders. (Amanda Chu)