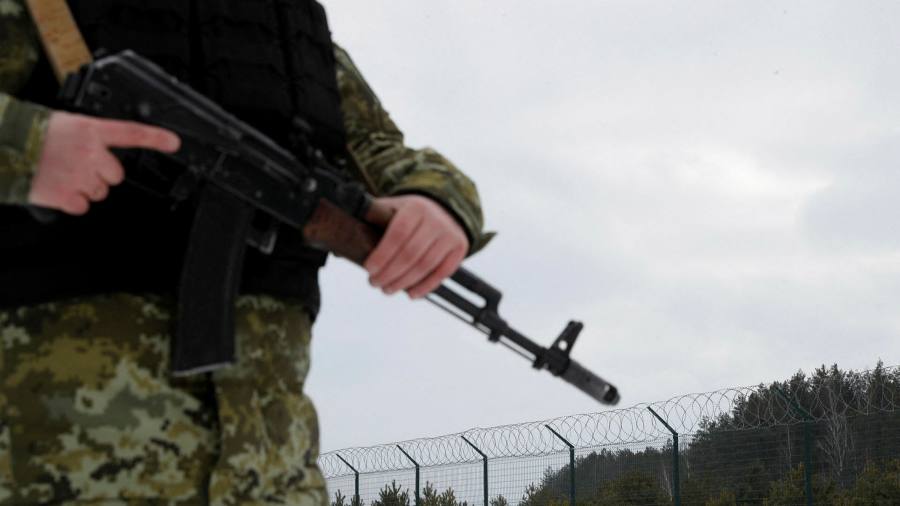 The White House has called the Kremlin’s claims that it is withdrawing forces from the Ukrainian border “false” and accused Russia of increasing its troop presence in the region by about 7,000 in recent days.

“Yesterday, the Russian government said it was withdrawing troops from the border of Ukraine . . . we now know it was false,” a senior Biden administration official said on Wednesday.

“In fact, we have now confirmed that in the last several days, Russia has increased its troop presence along the Ukrainian border by as many as 7,000 troops, with some arriving as recently as today.”

US officials declined to provide more details to substantiate the claims, but said the intelligence was “fairly authoritative”. On Tuesday, President Joe Biden said Russia had concentrated about 150,000 troops on its border with Ukraine and in neighbouring Belarus.

Thanks for reading FirstFT Americas. Do you have any feedback on today’s newsletter? Share your thoughts with us at firstft@ft.com — Wai Kwen

1. Can Jay Powell build consensus at a divided Federal Reserve? After a united front during the pandemic, officials are split over how aggressively to raise rates. The chair of the US central bank has the tricky task of negotiating agreements between policymakers who are at odds on how to tighten monetary policy.

2. Fossil fuel and agriculture handouts climb to $1.8tn a year, says study Governments worldwide are spending at least $1.8tn a year on subsidies in support of heavily polluting industries led by coal, oil, gas and agriculture, according to new research, despite their commitment to climate change targets.

3. European wind groups blown off-course by ‘perfect storm’ Turbine makers are losing tens of billions in value amid supply chain woes and raw material inflation. Over the past year, more than $58bn has been wiped from the market value of the region’s three biggest wind companies: turbine makers Vestas and Siemens Gamesa, and offshore developer Orsted.

4. Apple shareholders urged to vote against CEO pay package Institutional Shareholder Services, a top shareholder advisory group, has recommended that investors vote against Tim Cook’s $99mn pay and bonuses package, forcing one of Silicon Valley’s most prominent campaigners on equality to defend his remuneration. How would you vote if you were an investor? Take part in our latest poll.

5. Goldman bankers achieved ‘hero status’ for 1MDB work Goldman Sachs bankers who worked on a series of lucrative bond deals at the centre of the 1MDB scandal achieved “hero status” at the bank, according to testimony from Tim Leissner, a former executive who has pleaded guilty in connection with the case.

Russia chairs UN meeting on Ukraine Russia, as current head of the UN Security Council, is due to hold a discussion about the crisis at the body’s headquarters in New York. Oleksii Reznikov, the Ukrainian defence minister, will join the gathering. European leaders plan to meet on the same day to discuss the latest developments on the border.

EU-Africa summit As leaders from both continents descend on Brussels for the start of a much-delayed two-day summit, there will be tensions over everything from Covid vaccines to counter-terrorism strategies.

Hungarian PM hosts Brazilian president Viktor Orban will host Jair Bolsonaro one day after the latter met Russian president Vladimir Putin against the wishes of the US and western allies. (France 24)

Corporate earnings Airbus made record profits last year and has restored its dividend. Food group Nestlé has reported its strongest growth in developed markets in a decade.

Inside Peloton’s epic run of bungled calls and bad luck It was a darling with investors and customers. But as the home fitness company was soaring to a peak valuation of nearly $50bn in late 2020, we now know that it was about to endure a series of tribulations that would involve the chief executive ceding his position and laying off three in 10 employees.

What it would take for Japan to get a national pay rise For those entering the Japanese workforce this year, their entire lives have been spent with three things stuck at zero: inflation, interest rates and the chances of the shunto “spring offensive” of wage demands being anything other than a disappointment. Can unions change employers’ minds?

Beijing Winter Olympics costs spiral as China spends to project rising status The country has spent at least Rmb56bn ($8.8bn) to host the Winter Olympics, with the cost to retrofit or build a dozen new venues almost double the original budget, despite a pledge to ensure the Games would be “economical”.

Clariant’s comeback faces setbacks The Swiss chemicals group was forced to delay its results this week after its auditors refused to sign off the annual accounts following an investigation into serious irregularities stretching back two years. But will the probe affect the bottom line?

Are companies walking their diversity talk? On this episode of the Working It podcast, Isabel Berwick talks to Taylor Nicole Rogers, the FT’s US labour and equality correspondent, to get a snapshot of where corporate America stands on diversity, equity and inclusion. Rogers also talks about her own workplace experience as a black woman.

Dissident Chinese artist Ai Weiwei, in self-imposed exile in Europe since 2015, has filled the galleries of Kettle’s Yard in Cambridge with an assortment of Chinese antiquities for his exhibition “The Liberty of Doubt”. They tell us a lot about how we approach art.

NVIDIA Stock Could Break Above Resistance

Inside The New COLDCARD Mk4