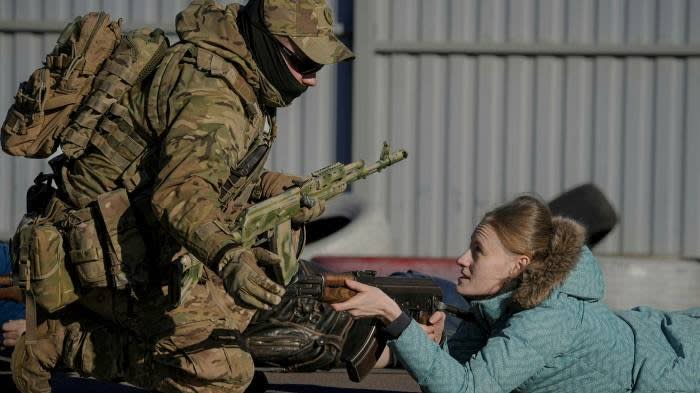 FirstFT: Scholz to warn Putin of western resolve on Ukraine

Olaf Scholz, German chancellor, is preparing to launch a fresh attempt to deter Vladimir Putin from further invading Ukraine, as US officials warned Russia was on the brink of launching a major attack on its western neighbour.

His preparations came as western nations continued to withdraw diplomatic and military personnel from Ukraine and some airlines cancelled flights to the country. Some European countries are preparing to receive a flood of refugees in the event of military action.

Scholz will travel to Kyiv today before arriving in Moscow on Tuesday. The German leader is expected to urge Putin to de-escalate the situation on the Ukraine border, a senior government official said. He would also convey “how grave the consequences of an attack would be” in terms of sanctions on Russia, and stress “that one should not underestimate the unity of the EU, US and UK”.

Scholz’s aides say he has not given up hope that diplomacy can avert a war, although they are playing down expectations of a breakthrough. “I don’t assume that we’ll come out of this with some kind of concrete result,” said the official. But he insisted that “now is not the time for resignation”.

Further reading on the Ukraine-Russia conflict:

1. Investors rush to US oil and gas bonds Investors are loading up on the debt of US oil and gas companies, lured by their ability to generate cash again as energy prices soar. Funds now hold overweight positions in high-yield energy bonds compared with a benchmark index, according to Bank of America Global Research.

2. Dubai ruler steps in over retail empire’s inheritance dispute Sheikh Mohammed bin Rashid al-Maktoum has appointed a judicial committee to resolve a family dispute among the heirs of the late Majid Al Futtaim, founder of one of the emirate’s largest private companies.

3. Widespread global commodity crunch Stockpiles of some of the global economy’s most important commodities are at historically low levels, as booming demand and supply shortages threaten to fuel inflationary pressures around the world.

4. SoftBank’s Arm IPO plan hit by legal battle SoftBank’s planned listing of the UK chip designer is being jeopardised by a battle at its renegade China unit following the failed $66bn sale to Nvidia. The head of the joint venture, Allen Wu, has launched a third legal case against Arm China.

5. Boris Johnson seeks to forge closer economic ties with China British officials said the prime minister has authorised a restart of the annual UK-China Joint Economic and Trade Committee, which has not met for four years amid increasing tensions between the two sides. The news angered some Conservative MPs.

US Super Bowl The Los Angeles Rams and Cincinnati Bengals will kick off in the National Football League’s Super Bowl at 6:30pm ET/7:30am HKT. Digital currency platforms are set to join the typical line-up of beer and car advertisements during the biggest game in American football.

Kamila Valieva hearing The Court of Arbitration for Sport is set to hold a hearing for Russia’s teenage Olympic figure skating prodigy, who tested positive for the banned heart drug trimetazidine prior to the Games. (CNN, FT)

Japan GDP data Economists expect the world’s third-biggest economy to have rebounded in the fourth quarter when figures are released today, according to a Reuters poll. (Reuters)

Tales from the Winter Olympics bubble The gate that seals off the FT’s Olympic hotel from the rest of Beijing is padlocked not once but twice. The simple aim of the “closed loop” system: to stop Covid-19 spreading from the rest of the world — through athletes and journalists — into the real China. Shanghai correspondent Tom Hale reports on an extraordinary week inside the Beijing Olympic bubble.

FT Global MBA Ranking 2022 High salaries for American MBA graduates helped US business schools to the top places in the FT’s 2022 ranking after a year that brought strong demand for the degree amid the disruption of the pandemic. See the full ranking here.

Lithuania tests the EU’s resolve on Chinese economic coercion Beijing is targeting the Baltic nation after it allowed Taiwan to open a de facto embassy. For many policymakers in Europe, Asia and the US, the tactics that China is deploying in the dispute with Lithuania mark a watershed moment for the global economy.

New York crypto couple implicated in ‘heist of the century’ In 2020, Heather Morgan wrote a column for Forbes that was headlined, “Experts Share Tips To Protect Your Business From Cybercriminals”. Now US authorities are alleging Morgan, who has called herself the “Crocodile of Wall Street”, was more of an expert than she let on.

Nixon in China: are there lessons for today’s leaders? Jane Perlez, a foreign correspondent for the New York Times, beat Richard Nixon to China by five years. She charts the tale of a historic rapprochement — and its unravelling.

“I am looking for bedside tables for my new home. Any ideas?” asks a reader. Designer and FT columnist Luke Edward Hall shares his tips on how to style this overlooked essential item.