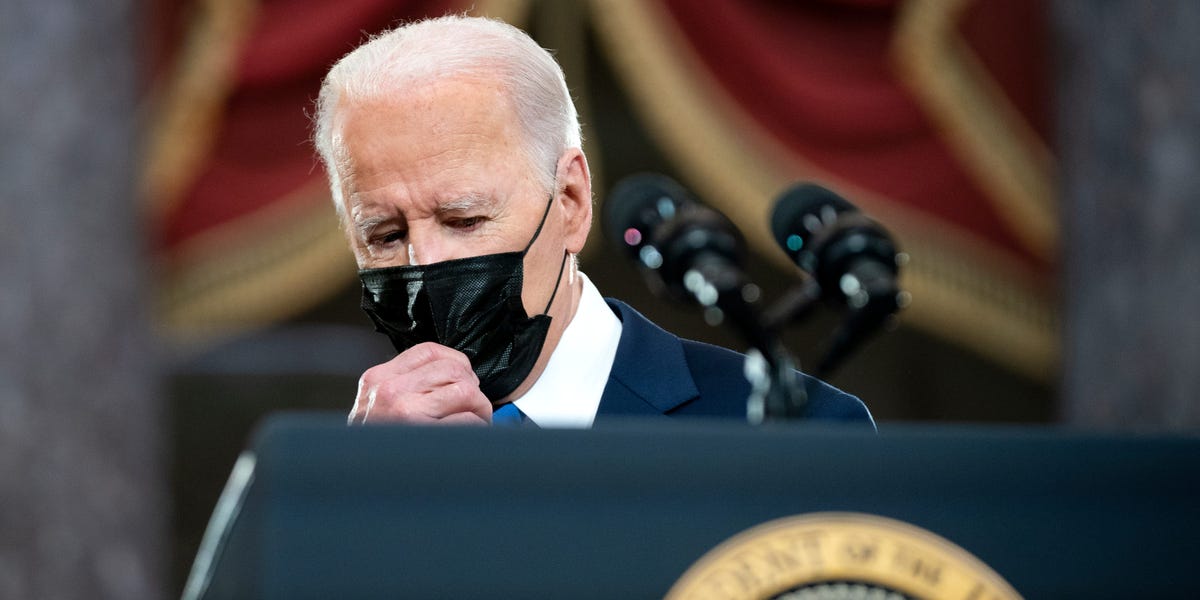 
Democratic governors are leaving President Joe Biden in the dust as they move forward with lifting mask mandates for businesses and schools.

Governors in New Jersey, Connecticut, California, Oregon, New York, Rhode Island, and Biden’s home state of Delaware have announced plans to relax different mask mandates, even as Centers for Disease Control and Prevention Director Rochelle Walensky continues to recommend indoor face-coverings in much of the country.

The widening gulf between Biden and the governors leaves the president in a tough spot politically as Omicron variant cases and hospitalizations drop and polling points to pandemic fatigue and a desire for some semblance of normalcy. Some Democrats say he’ll need to respond quickly.

“I can only assume that folks at the White House are racing to catch up to where the governors are heading because they’re in a somewhat of a difficult spot right now,” said Jim Manley, a longtime aide to the late former Senate Minority Leader Harry Reid. “It’s pretty clear to me, not only from anecdotal evidence but also looking at the polling, that folks just want it to be over with, despite the fact that it’s not.”

Indoor face-masking has become a hot-button issue driving protests and lawsuits, particularly over school mandates. Seven in 10 Americans agree with the sentiment that “it’s time we accept that Covid is here to stay and we just need to get on with our lives,” according to a Monmouth University poll released January 31. The poll found ratings had slipped for how the president and federal health agencies have handled the pandemic while ratings for governors’ Covid handling improved slightly.

Jim Moran, a former Democratic House member from Virginia, told Insider that “the governors are right” to provide direction and the president should “show more deference” to officials at the state and local levels, acknowledging their positions particularly on masking in schools.

“If he doesn’t do the right thing, it’s a devastating political issue,” he said. He added that Walensky of the CDC is “extremely competent, a very good professional, but there are times when POTUS needs to weigh in on this.”

The news came as Walensky fielded questions during a news briefing from the White House Covid-19 Response Team and public health officials about the CDC’s position on indoor masking, illustrating the gap between Biden and his party’s governors. She said she understands “the need and desire to be flexible and we want to ensure the public health guidance that we’re providing meets the moment that we’re in.”

But she added that right now, “we continue to recommend masking in areas of high and substantial transmission. That’s much of the country right now in public indoor settings.”

Masks are required in federal buildings, airplanes, and trains. Last month Biden urged face mask-wearing as a “patriotic duty,” and he announced the federal government would make N95 masks available to Americans for free.

“I know we all wish that we could finally be done with wearing masks. I get it,” he said on January 13.  “But there is — they’re a really important tool to stop the spread, especially of a highly transmittable Omicron variant. So, please, please wear the mask.”

Biden can “absolutely” claim leadership on COVID policy because it’s “his policies that got people in a position where they’re feeling much better about how to look at this disease,” Manley said.

House Democrats’ campaign arm will be trying to communicate that message as they enter a tough campaign season, in which Republicans are expected to win back the House.

“People are sick to death of this pandemic,” said Rep. Sean Patrick Maloney of New York, head of the Democratic Congressional Campaign Committee, told reporters at the Capitol in responding to a question from Insider. “And I do believe, because of the president’s leadership and the Democratic plan to beat the virus, that we will be in a position to communicate a clear off-ramp.”