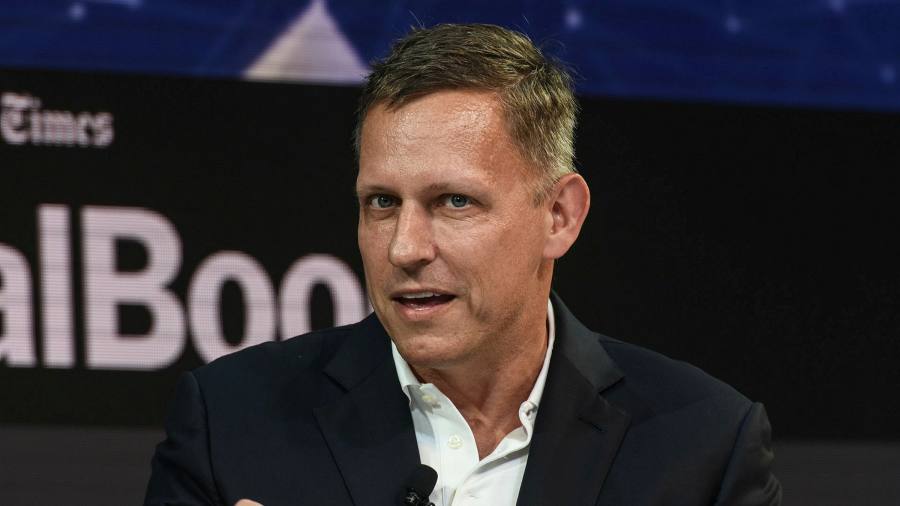 FirstFT: Peter Thiel to leave Meta board and focus on politics

Peter Thiel, the billionaire tech investor and Silicon Valley’s most prominent supporter of the former US president Donald Trump, will not seek re-election to the board of Facebook’s owner Meta in order to focus on “political endeavours” ahead of the midterm elections.

Thiel, co-founder of PayPal and Palantir, was the first outside investor in Facebook and joined the board in 2005. He has been a close confidante of chief executive Mark Zuckerberg, helping to guide him from Silicon Valley start-up founder to chief executive of the world’s largest social media network.

But Thiel’s presence on Facebook’s board has long been considered contentious by some because of his political affiliations.

Thiel, 54, in 2016 gave more than $1mn to pro-Trump groups. He continued to support the Republican party throughout 2021, donating about $86,000 to the National Republican Congressional Committee and Republican leadership committees.

More recently, he has become a big donor to a new, younger crop of rightwing populists, including Blake Masters and JD Vance, who are seeking election to the Senate in the 2022 midterm elections.

The Republican party remains riven with internal divisions over its response to last year’s assault on the Capitol. Over the weekend the Republican National Committee — the party’s leadership body — triggered a backlash from traditional supporters when it issued a defence of the rioters as proponents of “legitimate political discourse” who, it said, were being unfairly targeted.

How likely do you think it is that Trump will run for a second term as US president? Email me at firstft@ft.com and share your thoughts. We may publish excerpts of the most thought-provoking comments. Thanks for reading FirstFT Americas — Gordon

1. US and Germany struggle to present united front US president Joe Biden and German chancellor Olaf Scholz failed to speak with one voice over the fate of a critical gas pipeline that runs directly from Russia to Germany after their first face-to-face meeting at the White House yesterday. French officials, meanwhile, said President Vladimir Putin had agreed to withdraw thousands of Russian troops from Belarus after the completion of planned exercises. Putin’s offer to de-escalate came after five hours of talks with Emmanuel Macron at the Kremlin.

2. SoftBank’s $66bn Arm sale to Nvidia collapses SoftBank’s planned sale of the UK-based chip designer to Nvidia collapsed yesterday after US, UK and EU regulators raised concerns about its effect on competition in the global semiconductor industry, according to three people with direct knowledge of the transaction.

3. Tesla subpoenaed by SEC Tesla has received a subpoena from the US securities regulator relating to its compliance with a settlement in 2018 that had resolved a dispute over chief executive Elon Musk’s tweet that he had “funding secured” to take the electric car maker private.

4. US budget airline Frontier to buy rival Spirit US low-cost carrier Frontier has agreed to acquire rival Spirit for $6.6bn, including net debt, in what would be the first large airline merger since the industry was rocked in 2020 by travel bans and lockdowns introduced to stem the spread of Covid-19.

5. Netanyahu trial delayed Former Israeli prime minister Benjamin Netanyahu’s trial for corruption has been thrown into disarray after an Israeli newspaper alleged that police hacked his aides’ and his son’s phones without a warrant during their investigation.

Digital currencies Nellie Liang, a senior Treasury official, testifies in front of the House Committee on Financial Services about the Biden administration’s proposal to regulate “stablecoins”, a type of cryptocurrency that has its value pegged to a traditional currency such as the dollar. The hearing comes as the US government’s system for spotting money laundering has received reports of a surge of suspicious activity linked to cryptocurrency.

US trade deficit The deficit is forecast to have widened to $83bn in December, data released by the commerce department is expected to show, from a deficit of $80.2bn a month earlier. Separately, data from Statistics Canada are expected to show a trade surplus of C$2.50bn in December. That is down from a surplus of C$3.13bn a month earlier, close to June’s 13-year high of C$3.23bn.

European Chips Act The forthcoming bill, to be published today, would give regulators sweeping powers to protect domestic production during a shortage crisis and help “shore up our security of supply”, said Thierry Breton, EU industry commissioner.

Unruly Reddit prepares for stock market debut The San Francisco-based social media platform, home of the anarchic r/WallStreetBets trade-tipping forum, is preparing for a stock market listing by stepping up efforts to build an advertising business by approaching agencies such as WPP.

Inside Axel Springer’s #MeToo moment In the spring of 2021, senior employees at German publisher Axel Springer thought they had defused misconduct claims against the editor of Bild, Europe’s top-selling daily newspaper. Instead, the real trouble was yet to come. A three-month investigation by the Financial Times takes a closer look into this episode.

Le Pen fights for far-right votes Marine Le Pen is facing an offstage power struggle worthy of the court of Versailles. Defections by some party officials to the camp of far-right challenger Eric Zemmour are complicating her efforts to unseat President Emmanuel Macron.

Data can be wrong, too The US labour force is significantly closer to returning to its pre-coronavirus level than we thought. The story about pandemic-exhausted Americans saying the hell with the job market had its basic premises undone, writes Rob Armstrong in the latest Unhedged newsletter. Sign up here.

The perils of ‘onboarding’ in a world of hybrid work In this time of historically high worker turnover, getting new hires settled in quickly is critical. “Poor onboarding is costly,” says Becky Frankiewicz, Chicago-based president of ManpowerGroup North America, a multinational staffing company.

As English Premier League clubs start to invest in the women’s game, the FT’s Murad Ahmed explains the business case and examines whether women’s football should replicate the structure and feel of the men’s game or establish an identity of its own.

Video: Football: the business case for the women’s game