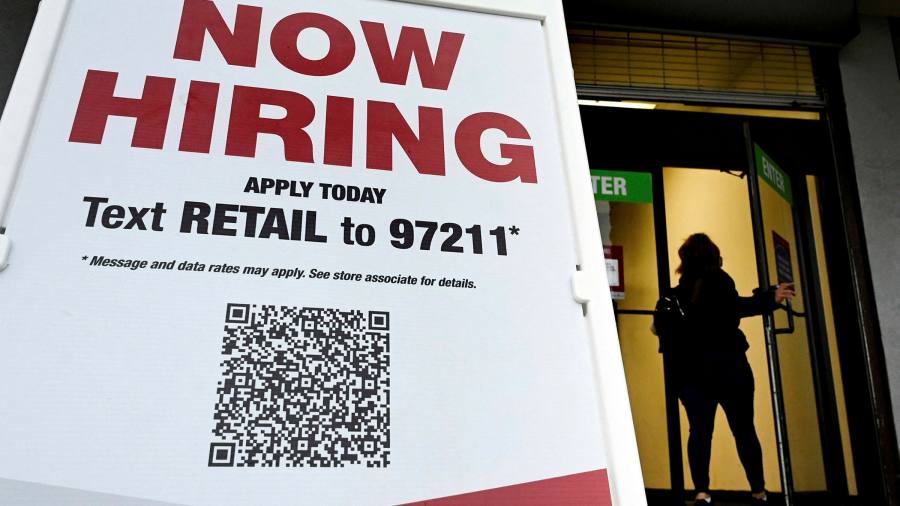 US adds a robust 467,000 jobs as economy shakes off Omicron wave


The US economy added 467,000 jobs last month, a far better than expected performance for the labour market amid the surge in coronavirus cases tied to the Omicron variant.

The surprise increase in the payrolls defied predictions by economists surveyed by Bloomberg, who projected gains of 150,000 jobs. It will fuel expectations that the Federal Reserve will move more aggressively than planned to tighten monetary policy to stamp out inflation.

It will also come as a relief for the White House, which had warned that jobs growth might be temporarily hit by the jump in Covid-19 infections.

In addition to the jump in payrolls in January, there were large upward revisions to data from previous months, while wage growth also rose more than predicted.

The unemployment rate climbed to 4 per cent despite the strong gains, from 3.9 per cent previously.

US government bonds sold off sharply after Friday’s jobs report, pushing Treasury yields to their highest level since the start of the pandemic. The decline in the price of the debt reflects concerns that further signs of strength in the labour market will bolster the Federal Reserve’s resolve to tighten monetary policy as it tries to tamp down persistently high inflation.

The biggest rises occurred in shorter-dated maturities, suggesting investors were betting that this would give the Fed more ammunition to raise interest rates. The move was being driven by real rates — yields stripped of the effects of inflation. Real yields for five- and 10-year maturities hit their highest level since mid-2020.

The 30-year real rate rose above zero for the first time since June 2020.

The data released by the Bureau of Labor Statistics on Friday was collected during the worst of the Omicron surge in the US, which fuelled a record-setting number of Covid-19 cases, hospital admissions and fatalities.

Top economic officials in the Biden administration had sought to get out ahead of Friday’s figures, with Brian Deese, director of the National Economic Council, saying this week that the January employment data “could look a little strange”.

The White House has touted the robust labour market recovery as one of President Joe Biden’s most important accomplishments in his first year in office, which has otherwise been beset by legislative setbacks. Despite signing into law a bipartisan infrastructure bill, his landmark $1.75tn Build Back Better spending package has stalled in Congress.

Biden is expected to speak on the jobs numbers on Friday morning.

Before the winter wave of coronavirus infections, employers were struggling to fill their ranks, as concerns about catching the virus and childcare issues deterred many people from joining the workforce.

The number of job openings has swelled as a result, with more than 10mn reported in the final month of 2021. That translates to 1.7 job openings for every unemployed worker, the highest since the US government began collecting the data two decades ago.

Some workers have sought to capitalise on the demand for new hires and have left their jobs in search of higher-paying roles. A total of 4.3mn Americans quit in December, just shy of November’s 4.5mn record.

US labour costs have, in turn, surged, as employers raised wages and sweetened benefits to compete for talent. Hourly earnings rose 5.7 per cent last month compared with a year earlier, and 0.7 per cent compared with December, a larger jump than expected.

The Federal Reserve is charting a course towards its first interest rate increase since 2018 at its next policy meeting in March. Jay Powell, the Fed chair, had said there could be “softening” in the economy because of Omicron, but said any weakness should be “temporary”.

“We think the underlying strength of the economy should show through fairly quickly after that,” he said at the press conference following January’s gathering of the Federal Open Market Committee.

Elevated inflation has compelled the Fed to scale back its monetary policy support far more quickly than initially planned. Top officials have also left the door open to a more aggressive string of interest rate rises this year or even raising rates by half a percentage point, as opposed to the quarter-point increases that have become the norm.

After Friday’s data, the number of interest rate increases priced in by the futures market rose to more than five by the end of 2022.

The central bank is also expected to begin reducing its near-$9tn balance sheet soon after the first interest rate adjustment in a bid to further tighten the settings of its monetary policy.