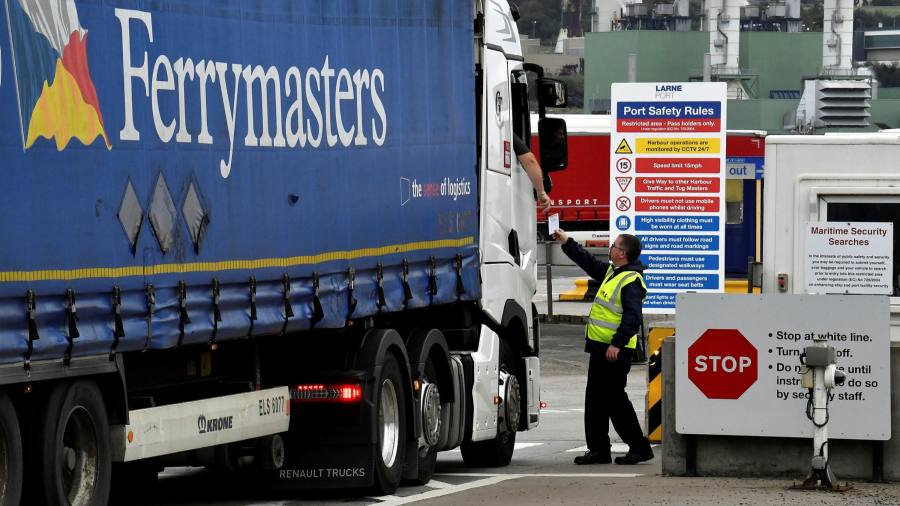 
A Northern Ireland minister has ordered a halt to post-Brexit customs checks on agriculture-related goods in the most concrete defiance to date of trading rules put in place when the UK left the EU a year ago.

Edwin Poots, the agriculture minister, announced his decision in Belfast on Wednesday after taking legal advice which he said concluded he could go ahead and halt inspections even without the full backing of Northern Ireland’s executive.

“I can now direct the checks to cease in the absence of executive approval,” he said, adding the change would start at midnight.

The Democratic Unionist party, which Poots briefly led last year and shares power with the nationalist Sinn Féin party in the Stormont government, vehemently opposes the so-called Northern Ireland protocol, the part of the Brexit agreement that governs trade in the region and put a customs border for goods down the Irish Sea.

That customs border was introduced after London and Brussels agreed there would be no return to a trade border on the island of Ireland but the DUP argues that it downgrades Northern Ireland’s status within the UK.

Sinn Féin maintains that the protocol offers Northern Ireland the best of both worlds since it remains both within the UK’s internal market and the EU’s single market for goods, and believes it should be respected.

Poots said he would present a paper to the executive soon “to seek agreement on the way forward”.

There was no immediate response from the European Commission or from London, which has argued in the past that Northern Ireland must implement border checks.

“What neither side will want to do is to react suddenly,” said Katy Hayward, a professor at Queen’s University in Belfast and an expert on Brexit. “They are really trying to push the UK government to show its cards.”

Maros Sefcovic, the EU’s Brexit commissioner, has virtual talks scheduled with UK foreign secretary Liz Truss on Thursday as part of long-running negotiations to reform the protocol after complaints it was suffocating trade between Great Britain and Northern Ireland.

British officials said that although Poots had been warning for some time he might suspend checks, the UK government was not given pre-notification. They firmly rejected the idea that Poots’s action was part of any concerted British plan to put pressure on the EU.

“We think they are under a legal duty to implement the checks,” said one UK government official while acknowledging that, ultimately, the Northern Ireland protocol was an agreement signed between Britain and the EU.

An EU diplomat said Brussels was likely to give London time to bring the DUP into line and, if it did not, would probably activate dispute resolution mechanisms. That would take at least six months to rule on and could impose fines and allow EU tariffs on UK goods.

Sinn Féin’s Michelle O’Neill, Northern Ireland’s deputy first minister, called Poots’ move a “stunt” ahead of elections due on May 5, and an “attempt by the DUP to unlawfully interfere with domestic and international law”.

Dublin was also dismayed. Foreign minister Simon Coveney told parliament it was effectively a breach of international law which he hoped would not be implemented.

“There is no place for Northern Ireland to be subject to foreign laws, foreign institutions, foreign courts, a foreign customs zone, foreign single market,” he said.