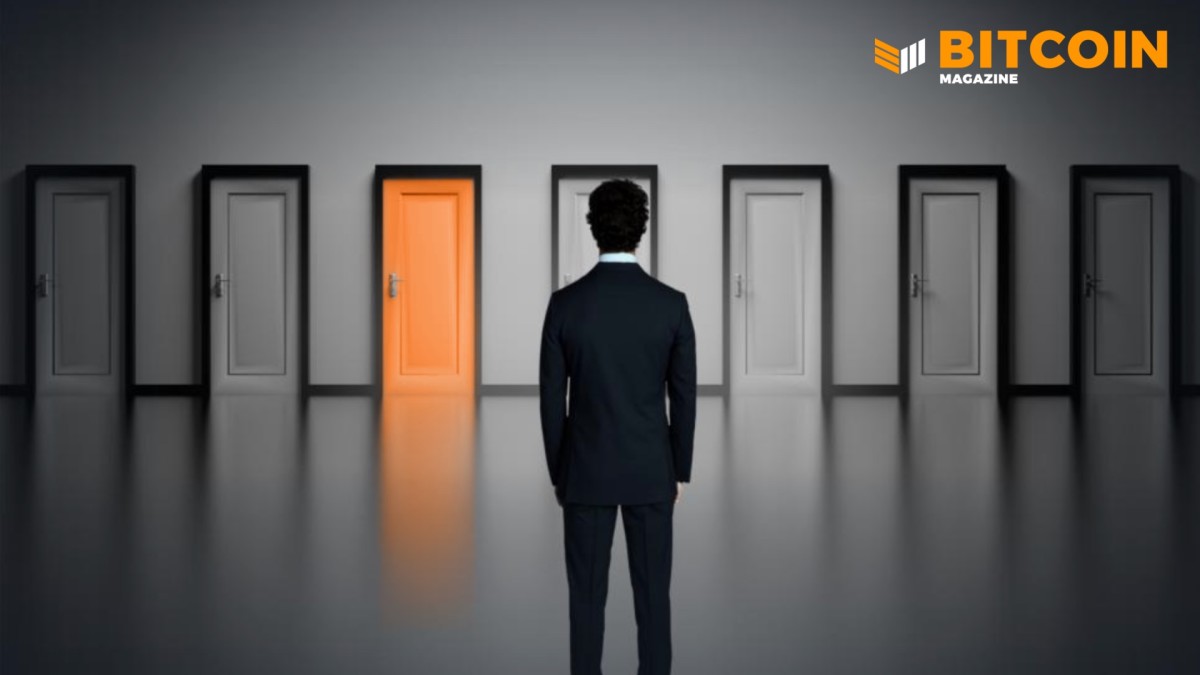 
Real estate ownership is the core aspiration driving the Modern Serfdom Model. Debt — and in particular, mortgages — is the mechanism that binds the serf to the system. Inflation covertly moves the finishing line further away each year. This is a game that’s impossible to win. The bad news is it’s getting even harder. But there are two pieces of good news. First, the model is close to its breaking point because home ownership is out of reach for almost all young people. Second, everyone, regardless of age, wealth or circumstances, has bitcoin as an escape hatch. On the system in which we indoctrinate people into this feudalism, Allan Watts said,

“…What we do is put the child into the corridor of this grade system with a kind of, “Come on kitty, kitty.” And you go onto kindergarten and that’s a great thing because when you finish that you get into first grade. Then, “Come on” first grade leads to second grade and so on. And then you get out of grade school and you got high school. It’s revving up, the thing is coming, then you’re going to go to college… Then you’ve got graduate school, and when you’re through with graduate school you go out to join the world. Then you get into some racket where you’re selling insurance. And they’ve got that quota to make, and you’re gonna make that. And all the time that thing is coming – It’s coming, it’s coming, that great thing. The success you’re working for. Then you wake up one day about 40 years old and you say, “My God, I’ve arrived. I’m there.” And you don’t feel very different from what you’ve always felt. Look at the people who live to retire; to put those savings away. And then when they’re 65 they don’t have any energy left. They’re more or less impotent. And they go and rot in some, old peoples, senior citizens community. Because we simply cheated ourselves the whole way down the line. If we thought of life by analogy with a journey, with a pilgrimage, which had a serious purpose at that end, and the thing was to get to that thing at that end. Success, or whatever it is, or maybe heaven after you’re dead. But we missed the point the whole way along. It was a musical thing, and you were supposed to sing or to dance while the music was being played.”

It Starts At School

State school systems are where the Modern Serfdom Model begins. Children are taught to be obedient above all else. They learn to fear authority, not to question things or speak up, that society is controlled from the top down. Of course the consequences aren’t all bad — particularly if you can later harness discipline and self-control to your advantage. But most importantly as it relates to the Model, children are molded to pursue only one course: higher education and a career, while being obedient servants of the state.

(Note: this is a deep rabbit hole in its own right. I highly recommend a short TED Talk by Sir Ken Robinson titled “Do schools kill creativity?”, as well as various podcasts and books by Bitcoiners Daniel Prince and Saifedean Ammous.)

If you’ve done what you were told to at school, chances are you’re heading to college or university. It’s what you’re supposed to do, of course. You’re told (and don’t question it) that you can’t get anywhere without a degree, let alone a job that pays enough to buy a house. The trap is that it isn’t free,no matter how your government packages and sells it. In many countries there are student loan systems. In others, you (and everybody else) pays through higher income tax rates. In either case, there is a substantial drag on net income post-graduation. For those in the countries with student loan systems, there is a strong incentive to find a secure job as quickly as possible in order to retire the debt. In the U.S. the total outstanding student loan debt is over $1.7 trillion. One in four Americans (approx 45 million people) have student loan debt, averaging over $37,000 each. Numbers in my native Australia are similar where there is almost AUD 54 billion of outstanding HELP debt owed by 1 in 10 people. The average outstanding debt is over AUD 20,000 with many people having debts over AUD 100,000. Try being an 18 year old entrepreneur and getting a loan that size from a traditional financial institution.

Notably, not everybody will choose the higher education path. Some will pursue any form of work as soon as possible or vocational training in a trade. This will often be a quicker path to income without the same debt burden. Whether this is leveraged successfully is another matter, but it’s worth highlighting that many people find an alternative path for different reasons (not necessarily a direct rejection of the Model).

As discussed in my article “Why real estate investors should love Bitcoin,” real estate is unquestionably an emotional asset class. Something that currently performs the dual role of an investment and shelter is inevitably going to be. The Australian movie, “The Castle,” encapsulates this perfectly. With classic lines such as “it’s not a house, it’s a home” and “a man’s home is his castle,” the movie shows that for many people real estate is so much more than an investment. Similarly, home ownership has been a cornerstone of “The American Dream” for decades. Marketing slogans such as “rent money is dead money” are treated by many as investment gospel. The culture of home ownership and real estate investing is something most people have fully bought into and hold dear. It has become the societal norm, even expectation, that you should aspire to own a home. This is why it’s at the center of the Modern Serfdom Model. At state school you were taught not to question these types of norms. And given the rest of the system is designed to push you in that direction, you don’t get much of an opportunity.

The word mortgage derives from Old French and Latin; it literally means “death pledge.” Many people will not enter into a mortgage on their first home until well into their 40s. With mortgage terms generally being 30 years (and most borrowers requiring the longest term possible in order to maximize borrowing capacity), they won’t be repaid until many borrowers are well into their 70s. The literal meaning of “mortgage” has never been more appropriate.

The mortgage is the key mechanism that enforces the Modern Serfdom Model. It would be impossible for most people to buy a home without a loan. The need to make your regular repayments creates an incentive for a stable, uninterrupted career of employment and disincentivizes entrepreneurial risk taking. In short, it binds you. Of course it is possible to escape. But it’s not easy. It’s contrary to everything you’ve been taught. And most will never try.

After a typical 3-to-5 years of higher education, assuming you’ve hung in that long and graduated, you leave with the credentials that most employers require simply to consider you for an interview. Whether you’ve learnt anything useful is debatable (and degree/school dependant) but that is not the subject of this article. What’s almost certain is you’ve been burdened with substantial debt and will be keen to pay it off. Let’s also assume you want to save for a house because that’s what an adult is supposed to do, right? So how long will it take to retire the loans and make a downpayment? Another 3-to-5 years, by the time you’re 30? Time to crunch some basic numbers.

There are flaws in this analysis; it’s not designed to be perfect but to demonstrate a point. For example, median house prices are more expensive than “starter” homes that younger homeowners might target. Or not doing it on a city-by-city basis so that for major cities, higher salaries (but also substantially higher house prices) are captured. Conversely, the 20% savings rate is possibly generous for most new graduates given the personal savings rate in the U.S. is well under 10%. Personally, I don’t think these things matter because the above snapshot completely disregards inflation. Adding it blows the numbers out of the water even on conservative assumptions. Taking the U.S. example:

That’s right, assuming 3% annual growth in net savings (which requires wages to outpace inflation!) and only 5% growth in house prices (well short of the 15-20% levels in most of the world today, but in line with the 30-year average), it would take 21 years to save for the deposit. Again, this is imperfect, but the point is it doesn’t take 2.1 years!

To pre-empt criticisms, some people may receive much larger salary increases over time due to promotions or job changes, i.e. at some point they may reach or exceed the average household income (but not necessarily before they have finished saving for a down-payment). Interest or investment earnings on the savings is also excluded. Interest rates are effectively zero presently and there are trade-offs for riskier investing of the downpayment. Also, some households may have savings rates in excess of 20%. For example, there will be dual-income, childless households saving towards this goal, which will greatly accelerate the process (although many would argue this dynamic is a direct response to the problem being discussed). The numbers are for a typical single person, not an outlier or high performer. Therefore, for most people even getting the keys to a mortgaged home is an increasingly difficult mountain to climb. It should be clear that inflation makes it even harder.

“You’ll Own Nothing. And You’ll Be Happy.”

There’s starting to be a widespread recognition that most young people will take decades to save for their first home. For example, research in the U.K. found half of all 20-35 year olds would still be renting in their 40s and a third by the time they claimed their pensions (timelines that make sense based on the high-level analysis above). As the World Economic Forum says, “you’ll own nothing. And you’ll be happy.”

Doing what was the cultural norm and societal expectation has now become highly aspirational and unrealistic for many who will give up trying or set their sights on a different goal. This alone has the potential to break the Modern Serfdom Model even without the interference and existence of the most perfect alternative: Bitcoin.

Bitcoin’s value, whether it be measured in fiat currency terms or purchasing power, is designed to pump forever. It benefits from what is colloquially termed Number Go Up (NgU) Technology. Due to its fixed supply of 21 million coins, it will ultimately be the most scarce asset that has ever existed. Bitcoin preserves and grows the value of your savings relative to all other assets due to the powerful combination of this scarcity and its adoption curve. It breaks the Modern Serfdom Model:

Ultimately bitcoin breaks the Modern Serfdom Model by being a superior store of value than real estate. The state and legacy financial system fear it for good reason: it dismantles their mechanisms of control at every level.

This is a guest post by James Santi. Opinions expressed are entirely their own and do not necessarily reflect those of BTC Inc or Bitcoin Magazine.

Investments to Capitalize on the Comeback of New York City: UBS