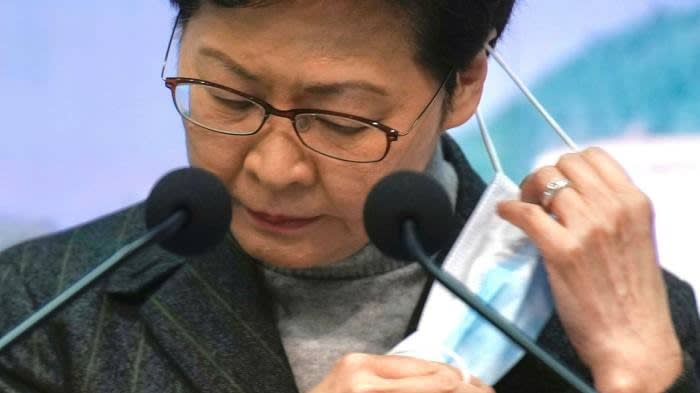 A senior Hong Kong official has resigned after attending a karaoke birthday bash in violation of the city’s tough “zero-Covid” guidelines, embarrassing the government of Carrie Lam as it was seeking to burnish its credentials with Beijing.

Caspar Tsui, Hong Kong’s home affairs secretary, attended the party alongside 14 other top officials including the police and immigration chiefs as well as pro-Beijing lawmakers in spite of a new Omicron outbreak in the city.

Days after news of the party emerged, new lawmakers selected under Beijing’s “patriots-only” overhaul of the political system held their first meeting but some were unable to attend as they were quarantined owing to the festivities. The reforms weeded out almost all pro-democracy opposition candidates from the legislature.

Gray’s report was heavily rewritten before publication, at the request of the Metropolitan Police, excising criticism over the most serious allegations of Covid lockdown-breaching parties. But even in its watered-down form, the report was scathing about “failures of leadership and judgment” in Number 10 and the Cabinet Office.

What’s your reaction to Caspar Tsui’s resignation? And calls for Boris Johnson to step down? Share your thoughts at firstft@ft.com. Thanks for reading FirstFT Asia. — Emily

2. Sony buys video game maker Bungie for $3.6bn In a wave of consolidation that has swept the gaming sector this month, the PlayStation owner has acquired the company behind the Halo franchise. The deal comes less than two weeks after Xbox maker Microsoft agreed to buy video game developer Activision Blizzard for $75bn.

3. Ex-BNP banker wins £2m payout for gender discrimination In one of the largest awards made by a UK employment tribunal, Stacey Macken is to receive £2m in compensation after BNP paid her significantly less than male colleagues over a four-year tenure at the bank’s London office.

4. Thailand axes planned 15% cryptocurrency tax The south-east Asian nation has scrapped plans to impose a 15 per cent withholding tax on crypto transactions after facing pushback from traders in one of the region’s biggest markets for digital currencies.

5. Chinese ski hub buried in debt after Olympics building spree Chongli county, one of the three hubs for the Beijing Winter Olympics, is facing severe financial problems after embarking on a debt-fuelled investment spree to prepare for the Games.

Reserve Bank of Australia The central bank will hold its monthly meeting, where a hawkish tone is expected amid soaring inflation.

India Union Budget The country’s Union Budget is set to be announced today, one day after the 2021-2022 Economic Survey was released. (Economic Times)

Automation exacts a toll in inequality When humans compete with machines, wages go down and jobs go away. But in recent decades, something in this relationship began to break down. GDP growth in the US has slowed and inequality has risen. Rana Foroohar examines why.

Air taxis: fantasy or realistic promise? Flying cars made a giant swoop forward in the past year, with a crowd of start-ups raising more than double the amount over the previous decade on the promise of making “urban air mobility” a reality. But will the exuberance evaporate?

Nestlé’s move to clean up the chocolate trade The food company has plans to triple its cocoa sustainability funding and make direct payouts to African cocoa farmers in a bid to remove child labour from its supply chain. There are at least three key points that the wider — non-chocolate — business world should note, Gillian Tett writes in our Moral Money newsletter. Sign up here.

Pakistan start-up looks to break taboos around menstruation Many women in Pakistan remain uninformed about periods. Instead of treating menstruation as a matter of shame, the social media-based project Aurat Raaj is spreading the message that periods are healthcare matter.

The paradox that leads professionals into temptation The greater a manager’s sense of professionalism, the more likely they are to accept a gift or bribe, argues Andrew Hill. Worse, high-minded professionals may be more susceptible to unconscious bias towards gift-givers because they are convinced they know how to ignore their blandishments.

Whether outdoor swimming, running or kick-boxing — the FT fashion team share their tried and tested activewear tips for the best cold-weather workout gear.

FT Asset Management — The inside story on the movers and shakers behind a multitrillion-dollar industry. Sign up here

Work From Home And Get Paid In Bitcoin