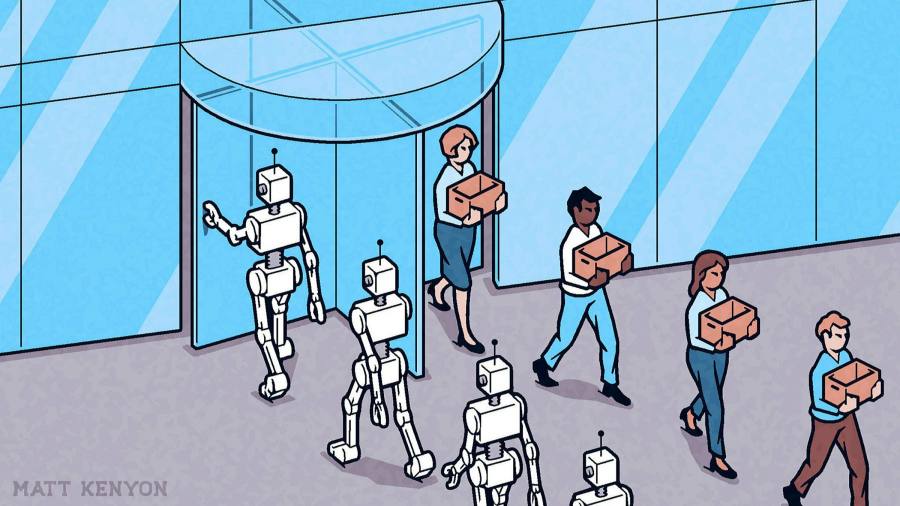 Automation exacts a toll in inequality


When humans compete with machines, wages go down and jobs go away. But, ultimately, new categories of better work are created. The mechanisation of agriculture in the first half of the 20th century, or advances in computing and communications technology in the 1950s and 1960s, for example, went hand in hand with strong, broadly shared economic growth in the US and other developed economies.

But, in later decades, something in this relationship began to break down. Since the 1980s, we’ve seen the robotics revolution in manufacturing; the rise of software in everything; the consumer internet and the internet of things; and the growth of artificial intelligence. But during this time trend GDP growth in the US has slowed, inequality has risen and many workers — particularly, men without college degrees — have seen their real earnings fall sharply.

Globalisation and the decline of unions have played a part. But so has technological job disruption. That issue is beginning to get serious attention in Washington. In particular, politicians and policymakers are homing in on the work of MIT professor Daron Acemoglu, whose research shows that mass automation is no longer a win-win for both capital and labour. He testified at a select committee hearing to the US House of Representatives in November that automation — the substitution of machines and algorithms for tasks previously performed by workers — is responsible for 50-70 per cent of the economic disparities experienced between 1980 and 2016.

Why is this happening? Basically, while the automation of the early 20th century and the post-1945 period “increased worker productivity in a diverse set of industries and created myriad opportunities for them”, as Acemoglu said in his testimony, “what we’ve experienced since the mid 1980s is an acceleration in automation and a very sharp deceleration in the introduction of new tasks”. Put simply, he added, “the technological portfolio of the American economy has become much less balanced, and in a way that is highly detrimental to workers and especially low-education workers.”

What’s more, some things we are automating these days aren’t so economically beneficial. Consider those annoying computerised checkout stations in drug stores and groceries that force you to self-scan your purchases. They may save retailers a bit in labour costs, but they are hardly the productivity enhancer of, say, a self-driving combine harvester. Cecilia Rouse, chair of the White House’s Council of Economic Advisers, spoke for many when she told a Council on Foreign Relations event that she’d rather “stand in line [at the pharmacy] so that someone else has a job — it may not be a great job, but it is a job — and where I actually feel like I get better assistance.”

Still, there’s no holding back technology. The question is how to make sure more workers can capture its benefits. In her “Virtual Davos” speech a couple of weeks ago, Treasury secretary Janet Yellen pointed out that recent technologically driven productivity gains might exacerbate rather than mitigate inequality. She pointed to the fact that, while the “pandemic-induced surge in telework” will ultimately raise US productivity by 2.7 per cent, the gains will accrue mostly to upper income, white-collar workers, just as online learning has been better accessed and leveraged by wealthier, white students.

Education is where the rubber meets the road in fixing technology-driven inequality. As Harvard researchers Claudia Goldin and Laurence Katz have shown, when the relationship between education and technology gains breaks down, tech-driven prosperity is no longer as widely shared. This is why the Biden administration has been pushing investments into community college, apprenticeships and worker training.

The idea is to prevent the hollowing out of labour markets in sectors and places that went along with, say, the Clinton era embrace of free trade without adequate protections for workers. If they don’t have training to cope with technology-driven change, the anger of blue-collar workers in Midwestern swing states could be dwarfed by that of lower and middle-income service workers whose jobs are automated.

Other issues require policy solutions. Companies receive more tax benefits from investing in technology, which can be depreciated, than in human labour. Getting rid of depreciation allowances for equipment such as software and robots could narrow that gap.

Competition policy and better corporate regulation have roles to play, too. As Acemoglu told the House last year, “Big Tech has a particular approach to business and technology, centred on the use of algorithms for replacing humans. It is no coincidence that companies such as Google are employing less than one-tenth the number of workers that large businesses such as General Motors used to do in the past.”

Big Tech’s business model is about getting rid of human labour and turning human behaviour into a raw material. It’s one that will be under increasing pressure in the year ahead, as the administration tries to push through legislation to curb the power of the platforms before the midterms. The bigger question of how to reconnect the fortunes of capital and labour in the coming era of mass automation remains unanswered.

Trust In The Government And Gold