Is It Time For Stocks To Rally, Commodities To Top And Gold To Start A Down Leg


A Macro View For Stocks, Commodities And Gold

The article’s title is one man asking one question among several I could be asking, given the volatility of macro indicators on a day-to-day and week-to-week basis. But as FOMC rides off into the sunset, it is the scenario that I think is most probable, given the current state of some indicators we follow.

As noted on Monday, volatility is at risk. The spiked impulsively, and the fear is probably unsustainable. A pullback is likely, and from that pullback, decisions will be made about shorting stocks on a coming bounce and/or positioning for a continuing bull market. During Friday’s trading hours we find VIX looking like it is realizing it is overdone. 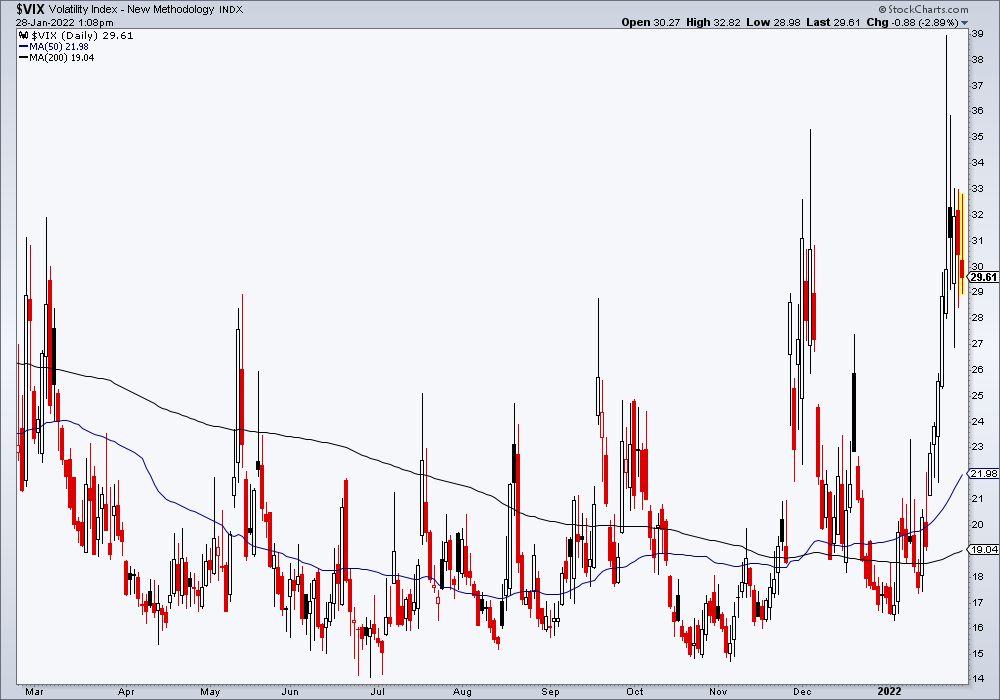 However, as you can see above the trend in VIX may be changing (to up). Try to filter out the spikes and watch the trends, best tracked by the 50- and 200-day moving averages. SMA 50 is already turning up and the SMA 200 is thinking about it.

Here is a view of VIX vs. Inverse SPX that we have used on several previous occasions to warn against coming market corrections, large and small. There is the VIX spike. If it does indeed pull back, it could well retain its fledgling uptrend after diverging inverse SPX since October. A sharp VIX pullback could be an opportunity to get bearish. It’s late cycle, after all, and that means every market correction should be respected as a potential gateway to a real bear market.

Other sentiment indicators show investors in full fear mode, which is contrary bullish. For example, Ma & Pa (AAII) are nowhere to be found. Newsletters have flipped quite bearish, smart money indicators are now buying the market and dumb ones are busy selling the fear. This does not mean a bear market is not beginning, but it probably does mean that even if so, this leg of it is losing downside momentum and a bounce to mess with the newly knee-jerked bearish would be appropriate.

Below is a chart we use often in NFTRH to gauge the U.S. indexes. When rolled below the daily SMA 50 (blue) a test of the SMA 200 was very likely. When it made the lower low to October, it opened up the prospect of a major top, gap fill or not. A bounce could well be a shorting opportunity, although bears have seen this movie before, especially during Goldilocks flavored yield curve flatteners. So, caveat.

All indexes but the have made similar lower lows. As for the semis, the sector was overbought, over-loved and indicated for correction when richly valued and sexy leaders like NVIDIA (NASDAQ:) and Advanced Micro Devices (NASDAQ:) started to look ugly back in December. All in all, I expect a bounce, but also warn that three of the four indexes now have markers (lower lows) that represent some technical damage. A sentiment event like this could well inspire new highs to come, but the lower lows could also win out. Hence, contrary sentiment positives short-term, caution beyond that.

Another warning is that sometimes over-bearish sentiment becomes self-reinforcing, especially when the margin man calls. So, no assumptions, just gauging probabilities. If the market were to take out the lows at the red arrows, a crash could even be indicated. Okay, easy now. 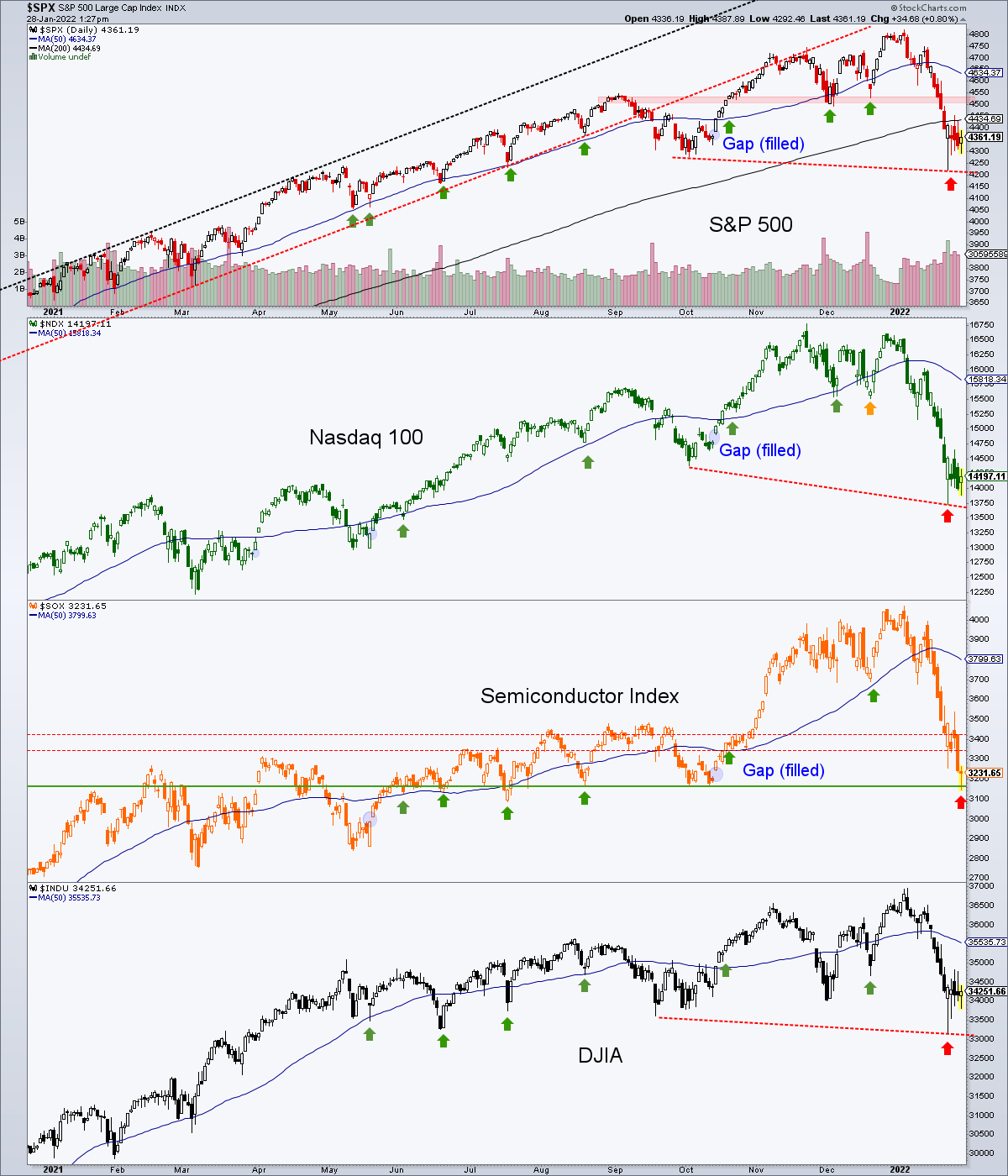 Since the U.S. stock market has been the (contrary) sentiment star of the last few weeks, I wanted to get a little more detailed with it. As for commodities and gold, not much has changed for the NFTRH view, so let’s generalize some points that fit with the current macro.

The long-standing target for the CRB index has been resistance at 270+. We have been targeting that area since 2020’s resumption of the inflation trades. With many lesser and outlier commodities losing momentum or outright declining, CRB is left with as its primary driver. Oil, in turn, is driven by more than inflation, with war drums beating, pricing manipulations always a factor and yes, the economic recovery’s heretofore supply/demand pressures as well.

Filing all we think we know away, let’s consider the CRB index at rising risk, the higher the index goes. While oil may grab some headlines if it hits $100/barrel, it would signal a big caution point for the complex. 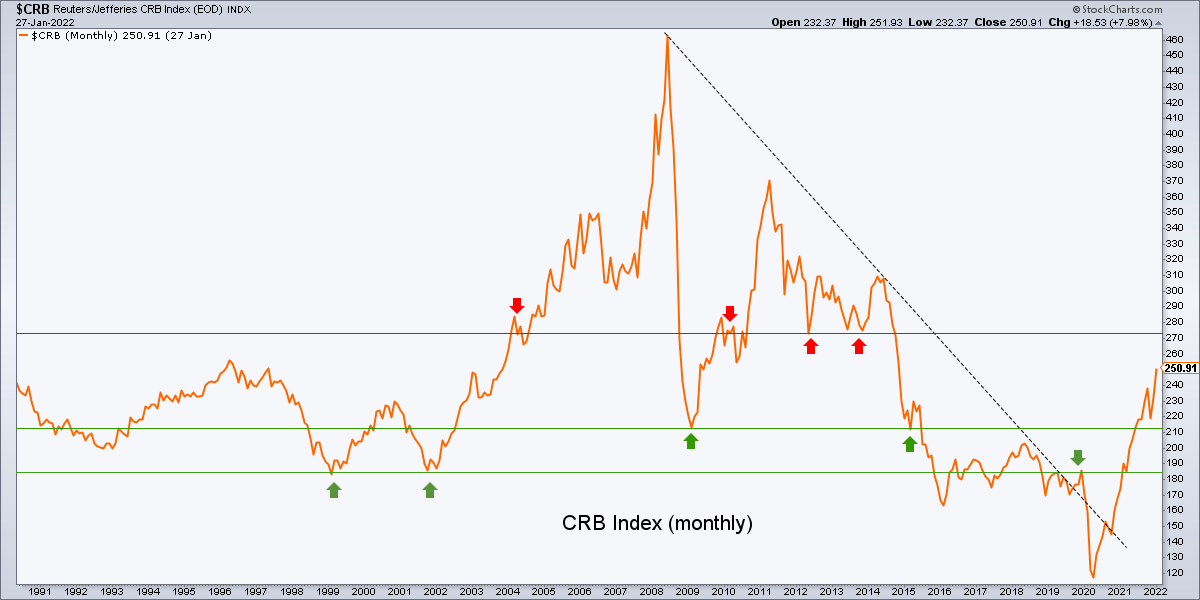 That is, considering CRB and inflation expectations travel similar roads and the latter is weakening while the former follows its oil component higher. 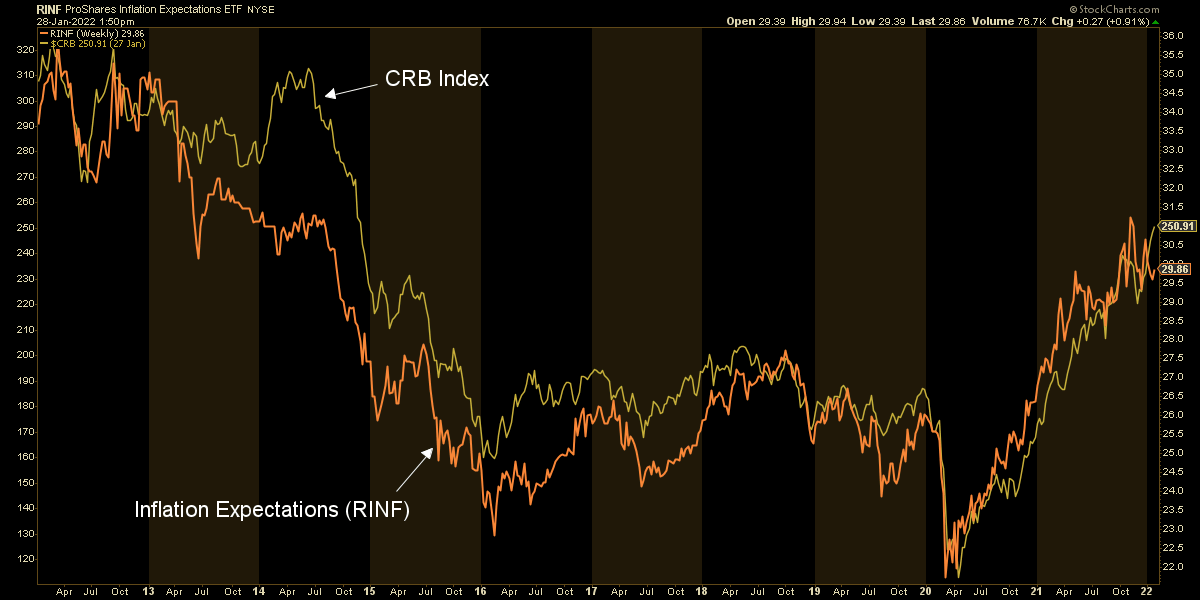 Gold will need to see its ‘real’ (commodity adjusted) prices start to rise before a negative macro is definitively indicated. Today we are in a transitional phase from the inflation the Fed created to the dis-inflation the Fed would now like to see. When this becomes economically untenable, gold should strengthen in relation to economically cyclical commodities.

Thing 1: Gold is bearish in relation to cyclical commodities, as it has been since mid-2020.

Thing 2: Gold’s risk vs. reward in relation to commodities is excellent and coming back on trend. 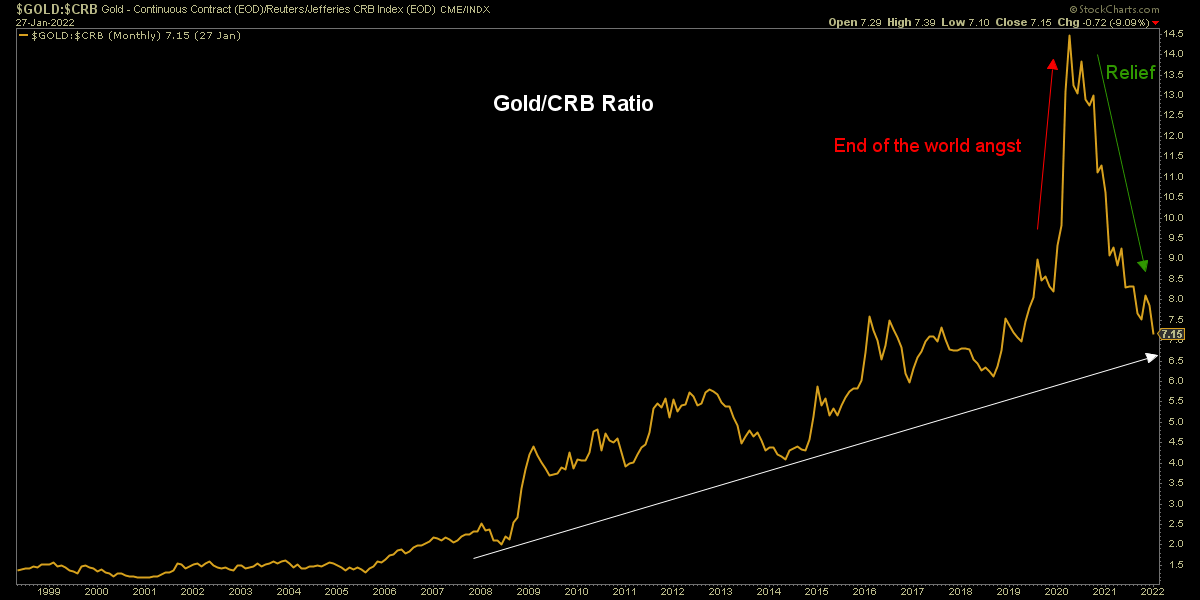 The gold mining industry will leverage that situation when gold’s commodity (and stock market) adjusted prices start to rise out of the positive risk vs. reward situation setting up. It’s a patience play.

The chart of Gold/Oil tells the story from the standpoint of the gold mining product vs. a key gold mining cost input. This fundamental consideration is and has been bearish since mid-2020. Risk/reward? That’s a whole different story and if you’re positioned to be a capitalist and not a victim, the reward side should show itself in the coming months. First, more inflationist gold bugs may need to be emotionally forced to sell due to the failing inflation. It’s not logical, but it’s how most gold stock traders appear to play it. 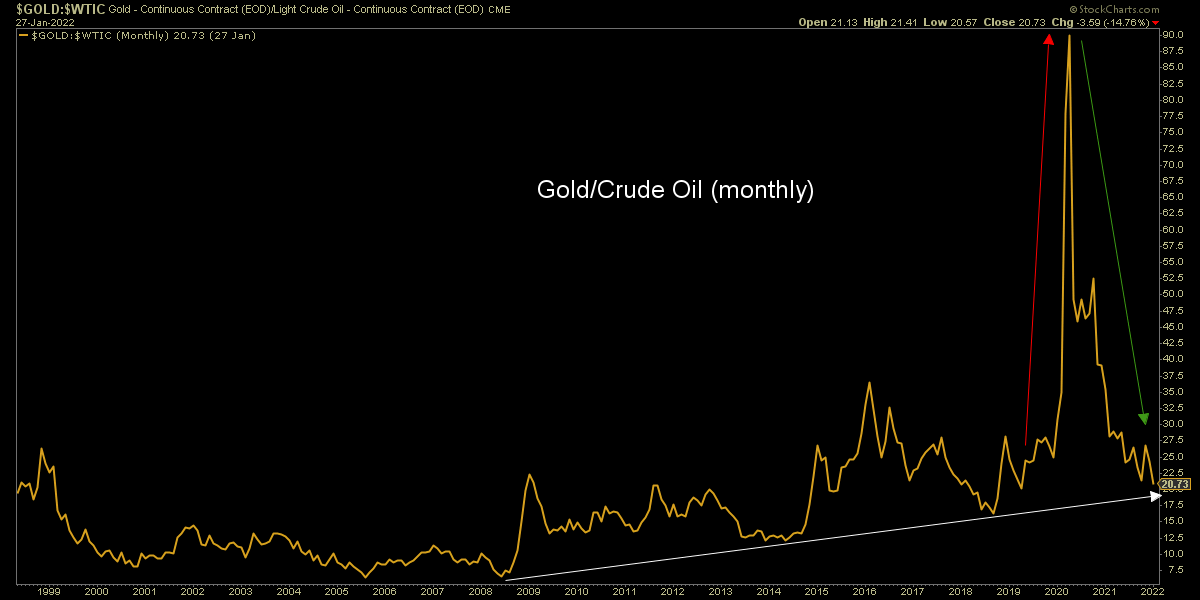 Among the options open to a macro in motion, don’t be surprised by a possibly sharp short-term rebound in stocks, a coming top in the CRB index (to join some outlier commodities already topped out) and a firm low in gold. Along with that last thing, a bottom in gold mining fundamentals is expected if the cyclical macro tops out in tandem with a gold low.

I still expect 2022 to be a golden year. Especially for those positioned to be able to capitalize. Cash is a position.

China warns of risk of military conflict with US over Taiwan