Ever since Federal Reserve chair Jerome Powell shocked markets at the end of November 2021 with his suddenly hawkish about-face on US monetary policy, investors have been selling off stocks. Tech shares and small caps were especially pummeled.

As a result, the small cap Index lost almost 12% of value, about 1% less than the tech-heavy . The broader fell 8.75% while the mega cap, value stock-laden retreated less than 6%.

The market has been repricing assets according to the prospect of more expensive dollars, making the most highly valuated stocks no longer a bargain.

The Russell 2000’s trajectory was so stellar between March 2020 and November 2021, it outperformed the SPX and Dow, even though the SPX and Dow continued rising after November. Indeed, the S&P gained 84% till it fell early this month while the Dow increased just 65.8% before it slumped in early January as well.

Now, some are suggesting that the small cap index could be bottoming out, as it’s down almost 19% from its November peak. We’re more pessimistic. We see it crossing the 20% threshold into bear market territory next. 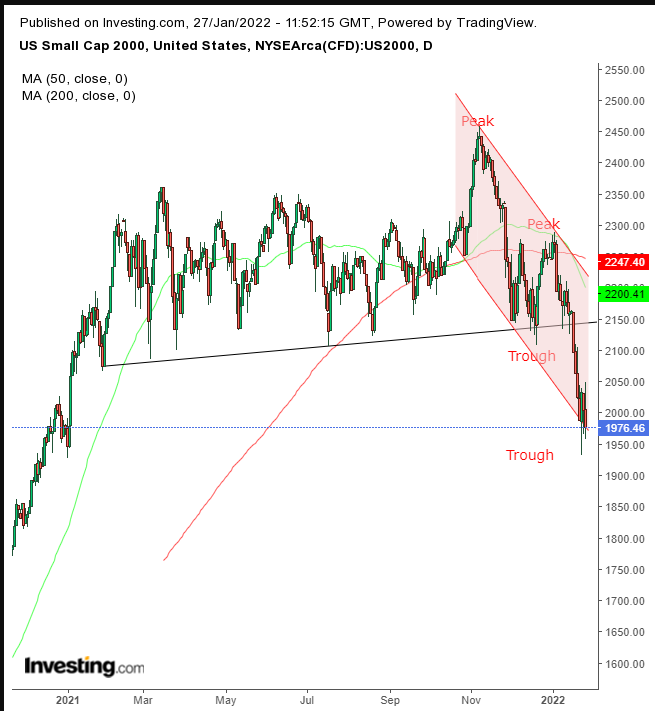 The Russell 2000 posted a descending series of peaks and troughs, establishing a downtrend, as the benchmark topped out from a range it was in since February 2021. The range slumped just after the 50 DMA crossed below the 200 DMA, triggering a Death Cross.

Conservative traders should wait for a return move that retests the integrity of the neckline before considering shorting the index.

Moderate traders would also wait for a corrective rally, but for a better entry if not for resistance confirmation.

Aggressive traders could enter a long contrarian position, counting on a return move, having found support at the bottom of a falling channel.

US economic growth accelerated in fourth quarter ahead of Omicron