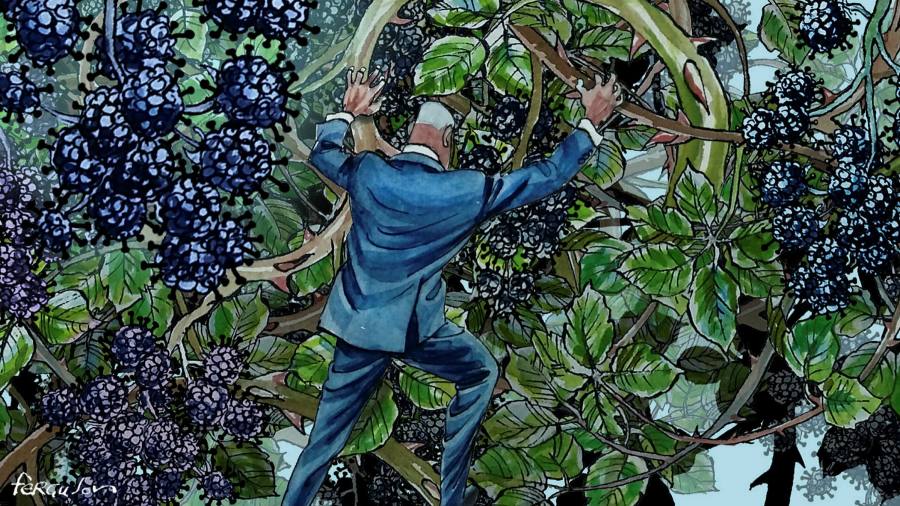 
While 2021 was a year of strong economic recovery, that recovery was neither universal nor complete. Unfortunately, prospects for 2022 now look worse than the IMF forecast last October: the main culprits, it argues, being the Omicron Covid-19 variant, supply shortages and unexpectedly high inflation. Downgrades in forecasts are particularly sharp for the US and China. Uncertainties are large, with risks concentrated on the downside. Above all, it is easier to argue that the fund’s base case is too optimistic than pessimistic.

These are my conclusions from the IMF’s World Economic Outlook Update. A year ago, the fund forecast global economic growth in 2021 at 5.5 per cent, with growth of high-income countries at 4.3 per cent. It now estimates that global growth last year was 5.9 per cent, with growth in high-income countries at 5.0 per cent. The improvement in emerging and developing countries was far smaller: a year ago, growth in 2021 was forecast at 6.3 per cent, against the 6.5 per cent it now estimates. In general, notes the fund, whether outcomes in 2021 improved over what had been forecast in late 2020 depended on achieving high levels of vaccination: vaccines are as much an economic policy as a health policy. (See charts.)

The principle factors behind the US downgrade are the removal of the Build Back Better fiscal package from the baseline, sharper than expected withdrawal of monetary accommodation and supply shortages. In China, it is disruption caused by a “zero-Covid” policy and stress in the property sector.

Far more important than such forecasts are the assumptions on which they rest. The fund assumes, crucially, that the pandemic will be brought under control globally by the end of 2022. This implies that vaccination will be achieved in most countries and that the vaccines will also remain effective. The fund is also still on “team temporary” with respect to high inflation, even though it will be worse and last longer than was earlier expected — by both itself and most forecasters. Yet its story remains one of short-term constraints and well-anchored inflation expectations: the forecast is that inflation in high-income countries will average 3.9 per cent in 2022 before subsiding in 2023. The fund also assumes that China will manage to stabilise its economy successfully.

The risks lie on the downside, as the fund also notes. One risk is that Covid is not brought under control. The most urgent task is to make vaccination effective, which is a challenge to scientists, businesses and health systems. It is also crucial to gain and keep public trust.

Another risk is that inflation will not be brought under control swiftly or easily. It is indeed easy to point to specific shocks, notably energy prices, as the proximate cause of inflation. In 2021, argues the fund, supply shocks lowered world output by 0.5 percentage points and raised inflation by one percentage point. But there is more to it than that. The data on the US labour market are especially puzzling, since employment and labour force participation are fairly low, while other evidence, notably on labour costs and quit rates, suggests that labour markets are tight.

It is reasonable to assume that supply bottlenecks will ease, since high prices are themselves the inducement for greater supply. In the case of energy, prices might remain high but stabilise or even start to fall. Yet, since monetary policy and financial conditions are exceptionally loose by historical standards, substantial tightening might still be needed to stabilise demand. The fund assumes that the US Federal Reserve’s asset purchases will end in March and that there will be “three rate increases in both 2022 and 2023”. That may not be enough, though it might also be too much. Historically disinflation has often led to recessions. One can add that if the inflation overshoot is both large and prolonged, the new doctrine of average inflation targeting will cause a headache. Will the Fed aim for sub-2 per cent inflation, to make up for any overshoot?

As the update to the Global Financial Stability Report adds, financial markets show “stretched valuations” — a nice understatement. Monetary policy tightening, possibly at a faster rate and to higher levels than expected, would soon tell us who has been swimming naked in our financial oceans. These financial risks are particularly important for emerging and developing countries. A big question might then be how well we are able to handle financial distress.

Beyond this there are evident geopolitical and climate risks. Just look at the Russia-Ukraine imbroglio. One particularly interesting question is how to manage a world in which most countries have decided to live with Covid, while China has decided to suppress it. This suggests a permanent closure of borders to movement of people. This would be a new iron curtain — an iron quarantine.

In all, continued recovery is to be expected, albeit at a slower rate than forecast a few months ago. But we have also been reminded of the risks. These are sharply to the downside. Moreover, the “normal” to which we may return is not the old one. The world has changed.