Market Selloff Into January. Things Are Starting To Get Interesting


The market selloff into January rattled investors as concerns of “So Goes January, So Goes The Year” began to dampen expectations. Combined with a more aggressive stance from the Federal Reserve, rising inflation, and a reduction in liquidity, investor concerns seem to be well-founded.

As discussed last week in ” the “blood bath” in the high-beta stocks is particularly humbling for the retail crowd that piled into risk with reckless abandon last year.

“Probably one of the best representations of the disparity between what you see ‘above’ and ‘below’ the surface is the ARK Innovation ETF (NYSE:). While the S&P 500 index was up roughly 27% in 2021, ARKK is down more than 20%. That is quite a performance differential but shows the disparity between the mega-cap companies and everyone else.” 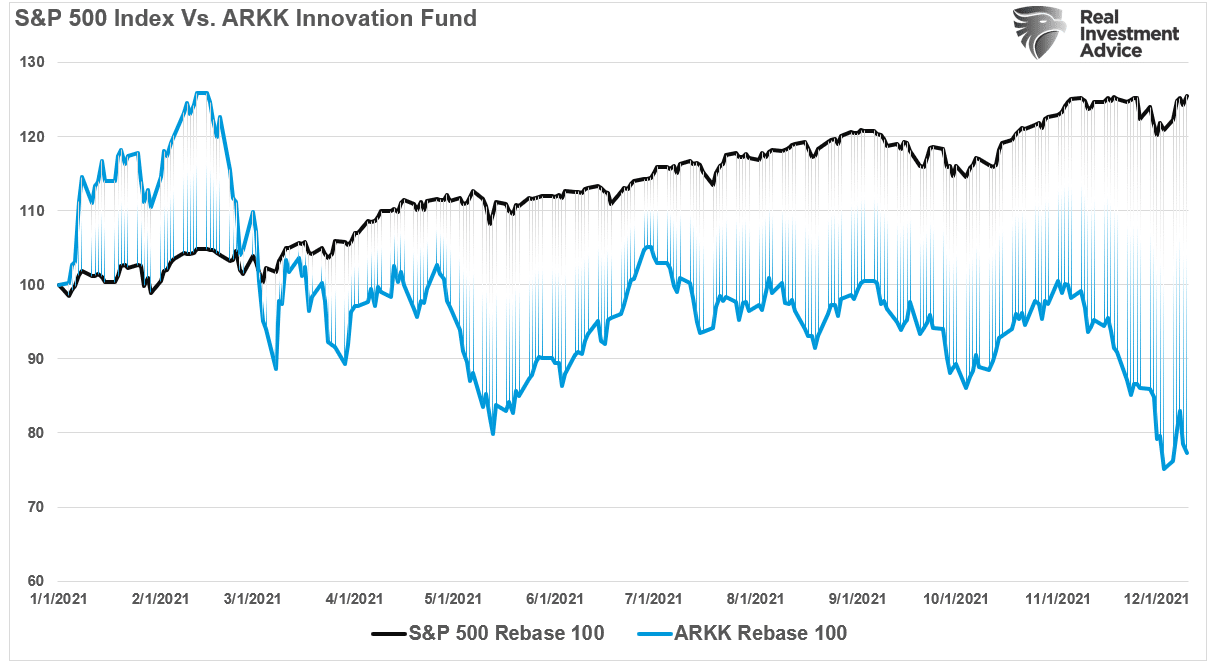 During the market selloff in the first two weeks of January, things did not improve for that group of stocks. However, retail traders have now set their sights on a new target: “value stocks.”

“Retail investors have been plowing a great deal of money into the markets in recent days. But remarkably, in addition to the broad index ETFs, they’ve been buying value sector ETFs (according to JP Morgan Research). So this rotation is not limited to institutions.” – The Daily Shot 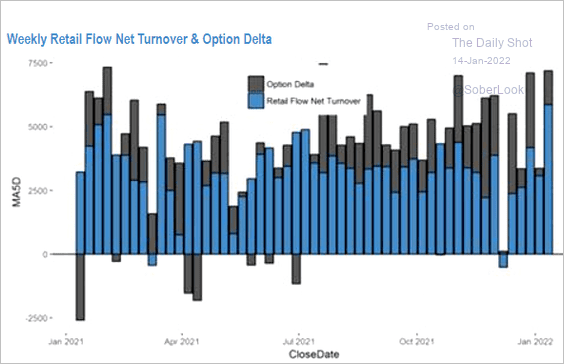 Despite the market selloff to start to the New Year, Wall Street continues to push overly optimistic projections of year-end returns. But, as noted, reality will likely be something entirely different.

For now, let’s set aside assumptions of year-end outcomes and focus on the statistical evidence. From this analysis, we can potentially respect the risks that might lay ahead.

According to StockTrader’s Almanac, the direction of January’s trading (gain/loss for the month) has predicted the course of the rest of the year 75% of the time. Starting from a broad historical perspective, the chart below shows the January performance from 1900. 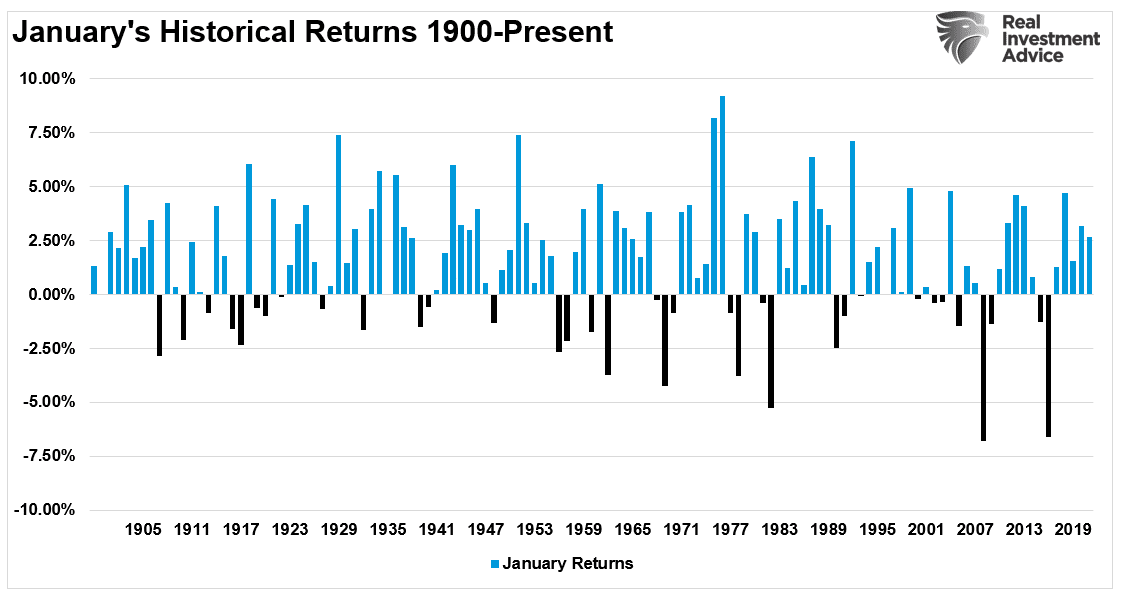 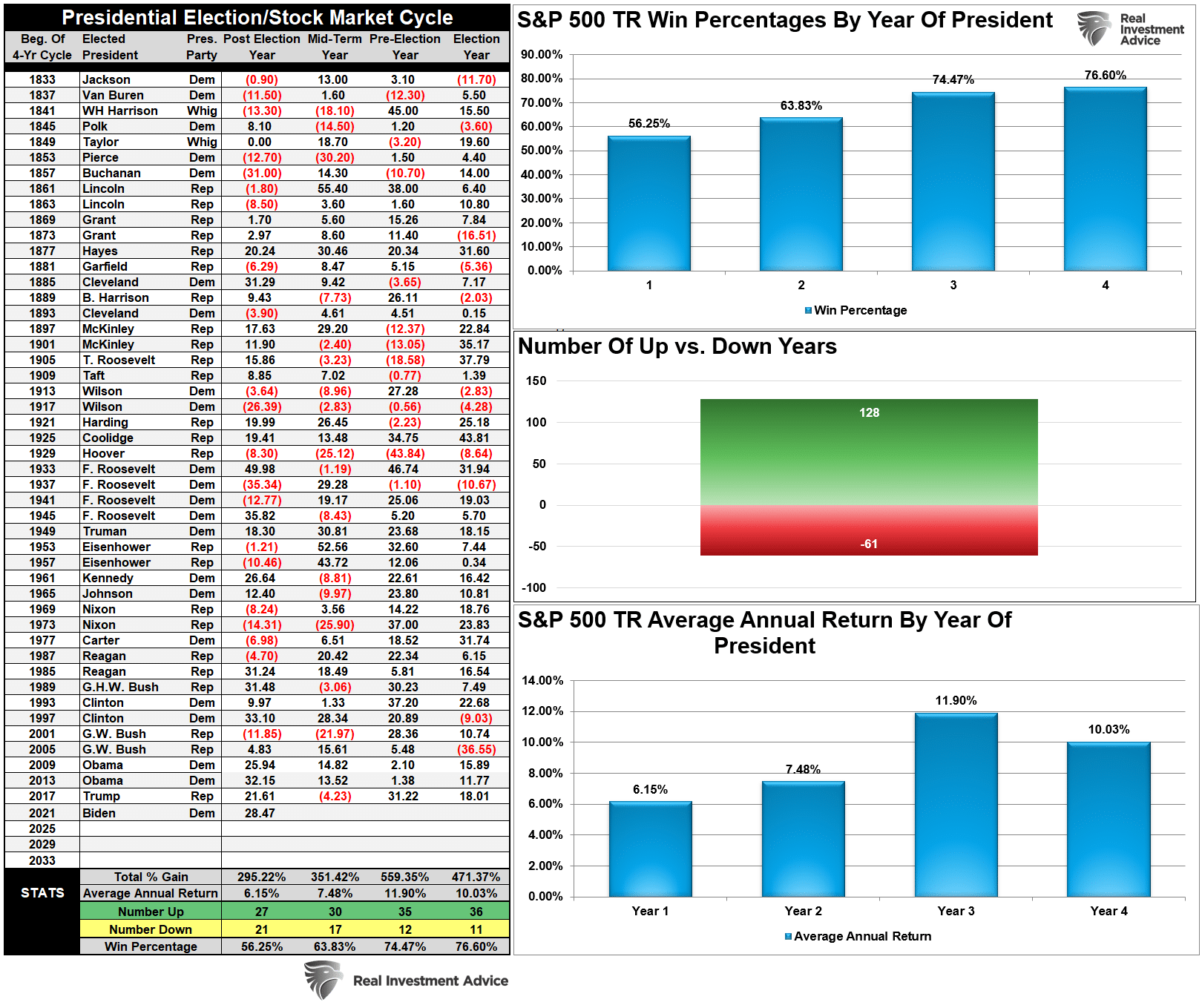 Of course, unlike most years since 1980, this year, stocks will be dealing with the s, excessively high valuations, and an aggressive policy change by the Fed.

While that doesn’t necessarily mean poor outcomes for investors, it certainly increases the risk.

The table and chart below show the statistics by month for the . As you will notice, there are some significant outliers like August with a 50% one-month return. These anomalies occurred during the 1930s following the crash of 1929.

The critical point is that January tends to be one of the best return months of the year. January also sees the most inflows into equities as asset managers put cash to work. Last week, Net flows into global equity funds remained strong (+$30bn vs +$26bn in the prior week).

However, while fund inflows remain positive, January is significantly underperforming the long-term median and average, so far. 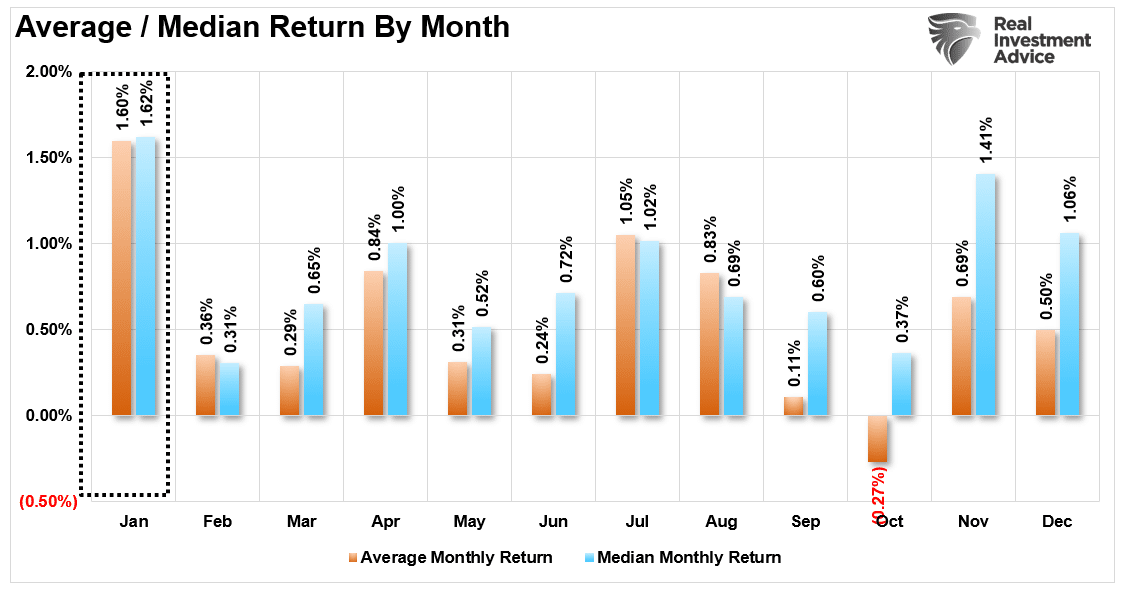 While January also holds the title for the most favorable return months since 1900, followed only by December and April, negative returns occur about 33% of the time. Such is a high enough risk not to get ignored. 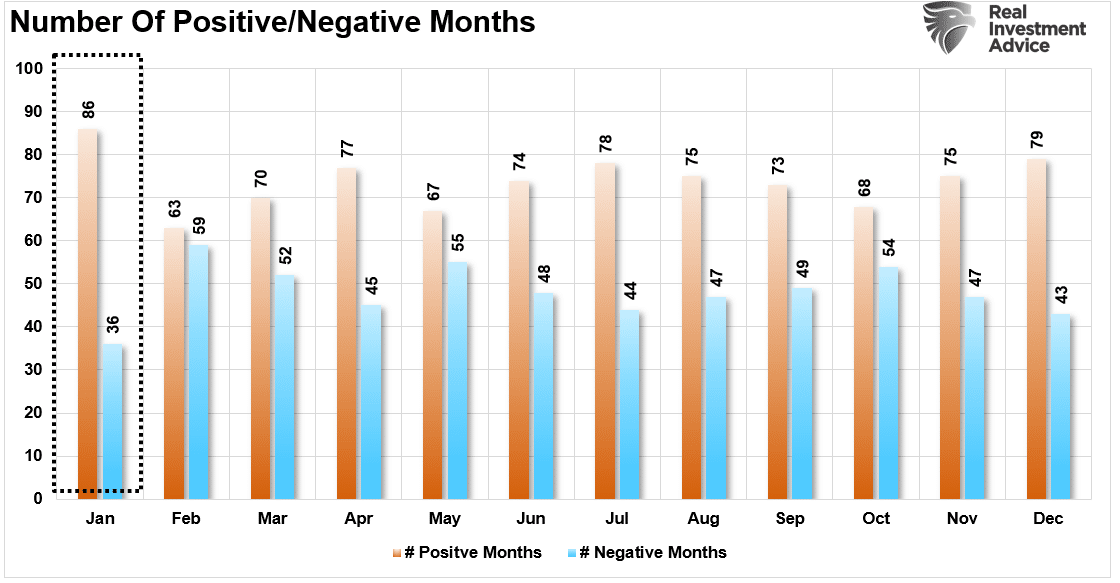 But January is not always a winner. While the statistical odds are high, it does not always end that way, even with a strong start. It is worth noting that while January’s maximum positive return is 9.2%, the maximum drawdown for the month was the lowest for all months at -6.79%. 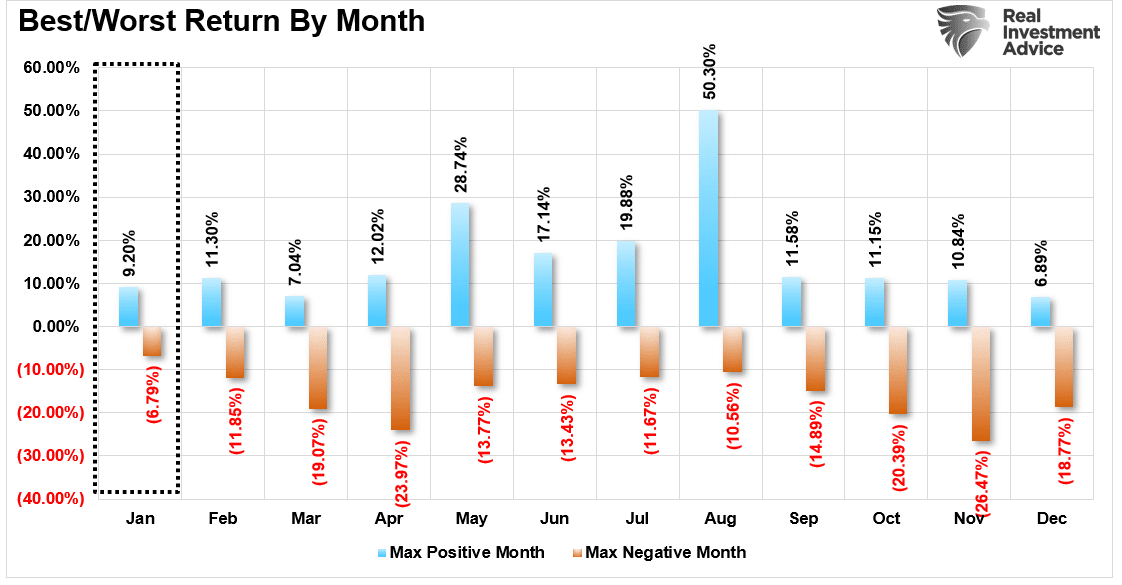 However, that is history. Let’s talk about where we are now.

As noted, it has been a rough start to the new year so far as the market selloff caught investors off-guard. As shown below, the market failed to hold December’s gains, negating most of the “Santa Claus” rally. However, on Friday, the market successfully tested and maintained the lower trend line from last October. 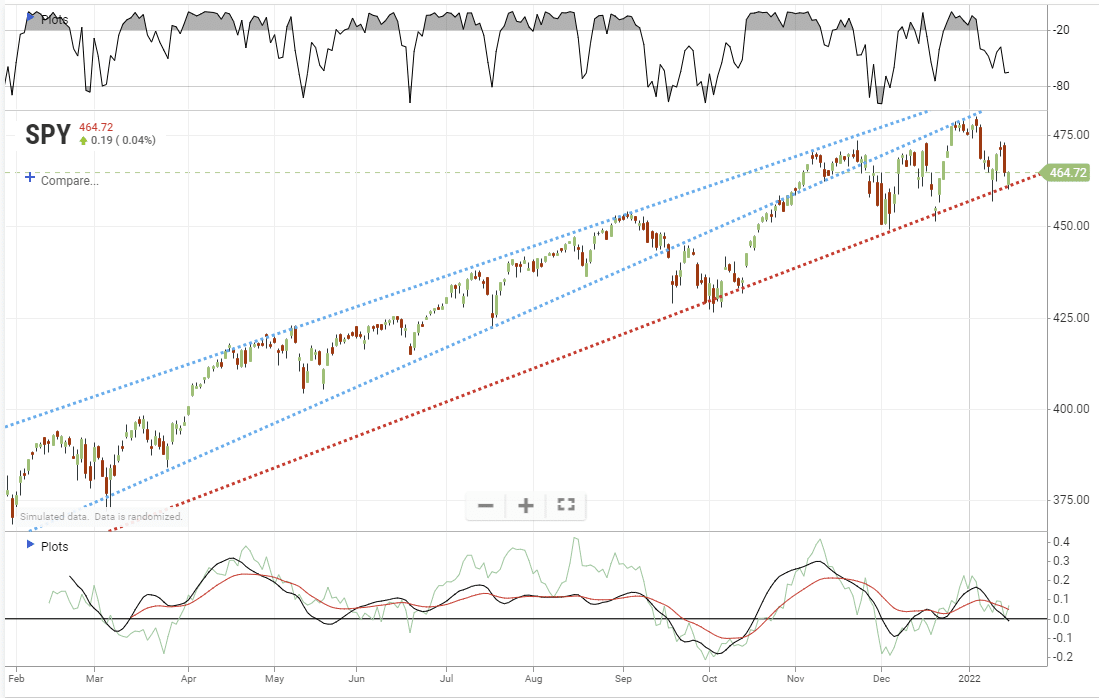 Risk is still prevalent. With sell-signals still intact, and the market not back to short-term oversold levels, there is still downside pressure on stocks. 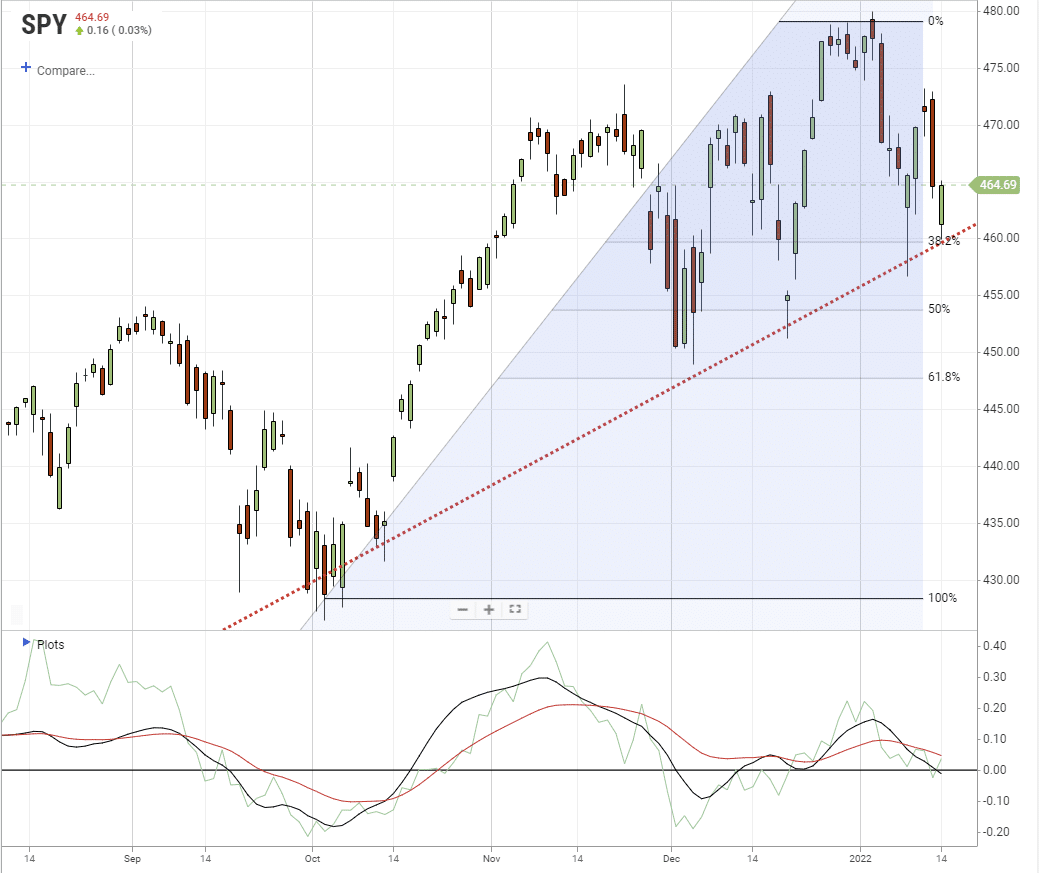 As shown, the current correction has already retraced 38.2% of the rally following the October correction. A full correction would wipe out all of the gains since December by completing a 61.8% retracement. While not shown, the 200-dma currently resides around 4400 on the S&P index, which would encompass roughly a 10% correction from the peak.

With earnings season kicking into gear this week, it would not be surprising for the market to hold current support, given that earnings should be reasonably robust. In addition, given we are looking at earnings for the 4th quarter of 2021, there was still substantial liquidity in the system and the Fed was still highly accommodative. However, as we get into the later quarters of 2022, the support for earnings will fade considerably.

As noted in this past weekend’s newsletter:

“As shown, the massive spread between input and consumer prices suggests corporations cannot pass along inflation entirely. Such means we could see a contraction in profit margins in the quarters ahead.” 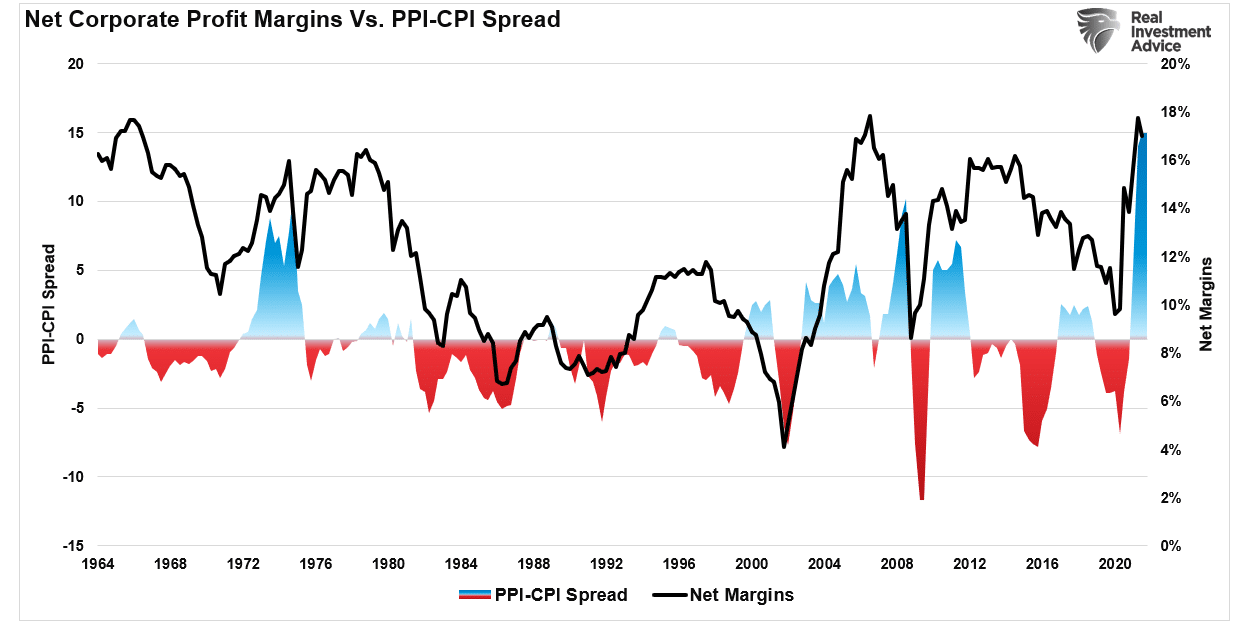 A Year Of Challenges

From the mainstream media’s view, expectations are high that 2022 will continue 2021. Maybe such will be the case. However, , many of the headwinds that supported the ramp in speculative behaviors have, or will, reverse in the months ahead. To wit:

The media is correct that “Fed rate hikes” won’t cause a bear market.

As is always the case, the event that changes the is always unknown. However, the eventual market reversion is almost always a function of changes in liquidity and a contraction in earnings. Such was a point I made Friday on Twitter: 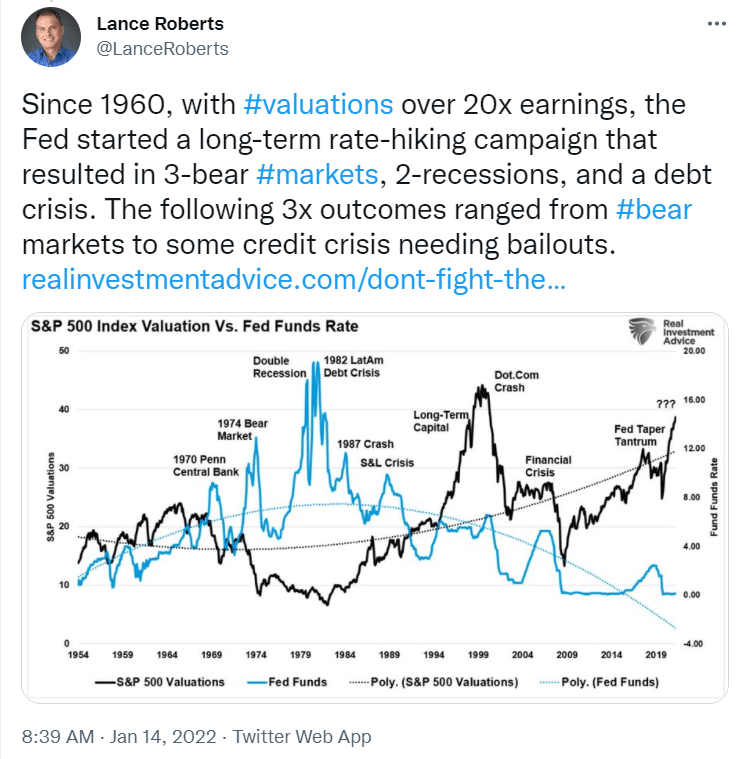 The biggest problem for investors is the bull market itself.

When the “bull is running,” we believe we are more intelligent than we are. As a result, we take on substantially more risk than we realize as we continue to chase market returns allowing “greed” to displace logic. Like gambling, success breeds overconfidence as the rising tide disguises our investment mistakes.

Unfortunately, our errors always return to haunt us. Always too painfully and tragically as the loss of capital exceeds our capability to “hold on for the long-term.”

I have no idea what this year holds. Maybe it will be another wildly bullish year where throwing caution to the wind pays off once again.

The current market selloff, and rotation to value, may undoubtedly be essential clues. With market valuations elevated, leverage high, and economic growth and profit margins set to weaken, investors should be paying close attention.

Pay attention; things are beginning to get interesting.