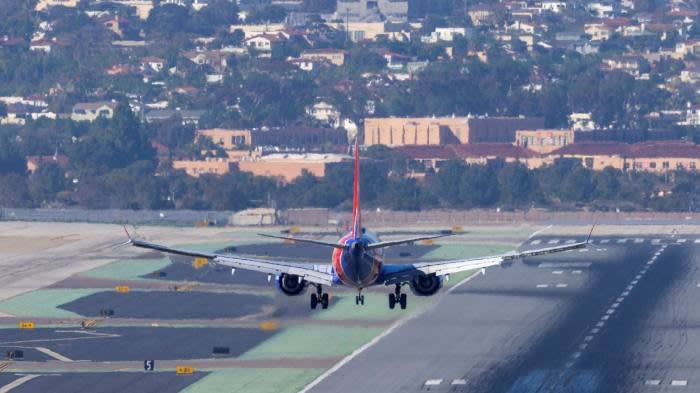 FirstFT: US airlines warn of ‘chaos’ over 5G roll out

The imminent rollout of high-speed 5G telecoms services threatens to ground flights across the US, America’s largest airlines warned yesterday, as they urged government agencies to intervene to avoid “chaos” for passengers and “incalculable” disruptions to supply chains.

Airlines for America, an industry lobby group, wrote to officials in the Biden administration, including transportation secretary Pete Buttigieg, and warned of the potential for 5G services to interfere with the sensitive equipment that aircraft use to take off and land.

The airlines called on the US government to block the rollout of 5G to towers located within two miles of airport runways that the Federal Aviation Authority has identified as being prone to disruption.

AT&T and Verizon had planned to launch their 5G services on December 5, but delayed the launch a month to allow time for safety reviews. The two telecoms groups initially rejected a subsequent request from regulators to delay their rollout by another two weeks to January 19, but then agreed to do so.

The planned 5G services use frequencies in the C-band radio spectrum, which can be close to those used by altimeters that measure an aircraft’s height from the ground and feed information into navigation instruments and other onboard safety systems.

5G services have been introduced in other countries without sparking the same concern among airlines. According to the FAA, the services planned in the US differ in several ways, including operating at frequencies closer to those used by aircraft equipment, and at higher power levels.

Thanks for reading FirstFT Americas. Here is the rest of today’s news — Gordon.

1. International oil prices hit seven-year high Oil prices have breached $87 a barrel and hit a more than seven-year high, threatening to propel global inflation higher. The price for Brent crude, the international oil benchmark, was up 1.3 per cent to $87.63 a barrel, the highest since October 2014. West Texas Intermediate, the US benchmark, which has risen more than 13 per cent since the start of year, reached a high of $85.74 in Asian trading.

2. Bank of Japan revises inflation projection The BoJ has shifted its view on inflation risk for the first time since 2014, driving the yen lower as a nation that has battled deflation for decades faces the mounting pressure of price rises in food and energy. The central bank revised its inflation projection upward from 0.9 per cent to 1.1 per cent for the fiscal year starting in April.

3. BlackRock’s Fink rejects accusations of being ‘woke’ Investors that focus on the interests of wider society rather than pure profits are not “woke”, BlackRock chief executive Larry Fink has said after stinging attacks from US conservatives. The head of the world’s largest asset manager used his annual letter to chief executives to fight back against accusations that BlackRock was using its influence to push a progressive agenda.

4. Russia’s sanction-proofing weakens western threats Moscow’s effort to reduce its reliance on the global financial system, which investors have dubbed the “Fortress Russia” strategy, could make western threats of sanctions a less effective deterrent from an attack on Ukraine. The EU’s appetite for Russian gas has also made any restrictions on energy exports potentially self-destructive.

5. Texas synagogue hostage-taker was British citizen Malik Faisal Akram, 44, from the northern English city of Blackburn was identified by the FBI as the armed man who took four people hostage at a Texas synagogue on Saturday. Police in Manchester said they had arrested two teenagers in the south of the city and were questioning them in connection with the investigation.

Earnings Goldman Sachs is expected to join other major Wall Street banks — like JPMorgan — in reporting record profits for 2021 fuelled by booming deal activity and lower-than-expected loan losses. Charles Schwab and BNY Mellon are also due to report results before US markets open.

Economic data The general business conditions index of the Empire State manufacturing survey, a gauge of business activity in the New York region, is expected to cool slightly. Meanwhile, the National Association of Homebuilders’ housing market index, a gauge of homebuilder confidence, is expected to hold steady as mortgage rates start to tick higher.

Washington The Senate will return from a long weekend, with Democratic Senate majority leader Chuck Schumer vowing to press ahead with the consideration of voting rights legislation, despite West Virginia senator Joe Manchin and Arizona senator Kyrsten Sinema’s continued opposition to changing Senate rules to scrap the filibuster.

Ukraine diplomacy Germany’s foreign minister Annalena Baerbock arrives in Moscow, a day after visiting Ukraine, for talks with her Russian counterpart Sergei Lavrov. Baerbock is pushing to revive the “Normandy” peace talks format between Germany, France, Russia and Ukraine to ease the crisis.

Horta-Osório’s flying visit On Sunday afternoon, António Horta-Osório was told that the Credit Suisse board he had chaired for just over eight months no longer supported him after serial Covid-19 quarantine breaches. For the Portuguese banker, who was brought in to turn round the scandal-ridden Swiss lender, it was an ignoble end to his short tenure.

How Facebook intends to cash in on the metaverse Pupil movements, body poses and nose scrunching are among the flickers of human expression that Meta wants to harvest in building its metaverse, according to a review of hundreds of applications to the US Patent and Trademark Office by the Financial Times.

Westminster’s pandemic was markedly different to everyone else’s The disconnect between the UK government machine and the rest of the country during the lockdowns of 2020 and 2021 lie at the heart of the “Partygate” scandal that has rocked Boris Johnson’s premiership and now leaves his position hanging by a thread, writes Sebastian Payne.

Is it really OK to dress down at work? Does that hoodie channel tech-titan-in-waiting or give off the vibe that you are playing Animal Crossing under your desk during seemingly endless Zoom calls, asks deputy fashion editor Carola Long. Dressing more individually is in line with bringing your whole self to work, one recruitment specialist tells Carola.

Things to do in Tokyo

Kathy Matsui is one of Asia’s top financial executives, and her groundbreaking work on gender parity helped shape Japanese government policy. She shares her guide to Tokyo, highlighting female leaders in the fields of art, design and food.

Bitcoin Is A Revolution For Global Money