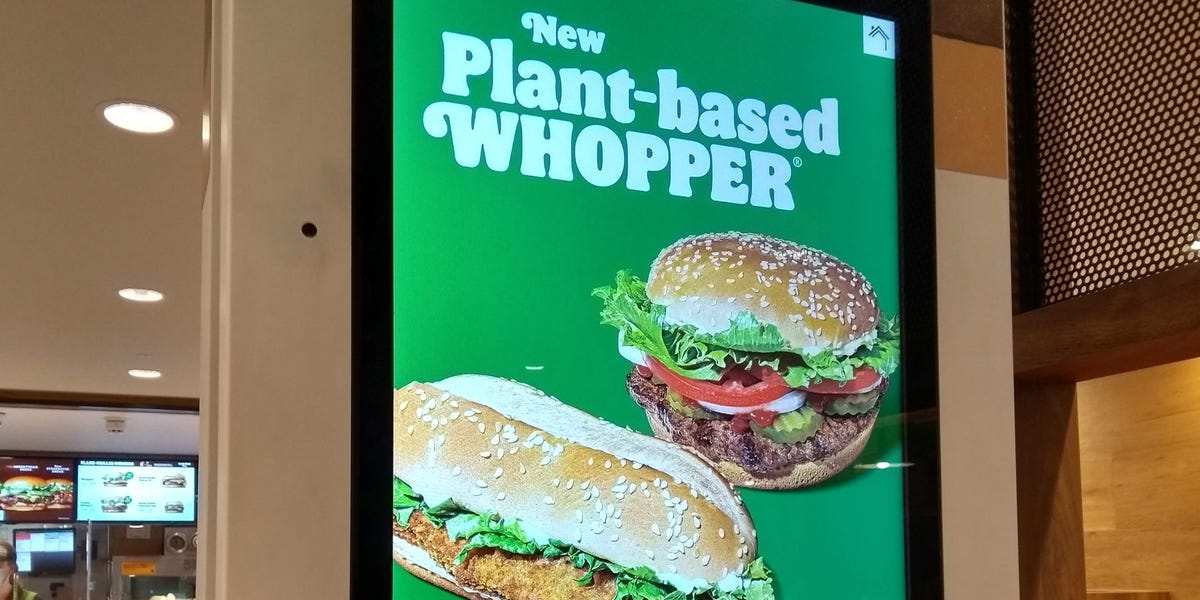 
From Starbucks scrapping its charge for non-dairy milk, to KFC and McDonald’s rolling out their vegan burgers nationwide, to Burger King unveiling vegan chicken nuggets, the first week of 2022 brought a whole lot more choice for UK vegan fast-food fans.

The big chains are finally taking vegan food seriously – even if some of the new product launches have been timed to coincide with the start of Veganuary – as they race to get a slice of a sector that could be worth more than $160 billion globally within the next ten years.

Fast-food chains in the US are rolling out more vegan dishes, too, albeit at a somewhat slower rate. Chipotle has launched its plant-based chorizo nationally while other chains including KFC, Burger King, Carl’s Jr., and McDonald’s are scrambling to partner with big-name fake-meat brands like Impossible Foods and Beyond Meat.

These products offer a significant potential prize for the fast-food giants. Bloomberg Intelligence reported that the plant-based foods market was worth $29.4 billion in 2020 and could grow to $162 billion in 2030, making up to 7.7% of the global protein market.

The fact that vegans still only represent a small chunk of the population isn’t a problem for the sector. And that’s because it’s not just vegans driving the trend.

Instead, non-vegans are helping fuel the plant-based boom by trying to cut down on their meat, fish, and dairy intake.

Fast-food chains that have unveiled vegan products have reported huge success. KFC said that its vegan burger sold at six times the average rate for new product launches when it was released in the UK. McDonald’s said that early UK sales data for the McPlant was “very encouraging,” while Eat Just said its “Everything Plant-Based Sandwich” is the top-selling hot menu item at Peet’s Coffee, selling three times more than initially forecast.

“Our plant-based products have proved to be an important sales driver in the UK, Germany, and the Netherlands and continue to grow as we launch new products,” José Cil, CEO of Restaurant Brands International, which owns Burger King, Tim Hortons, and Popeyes, said at its last earnings call.

Technological innovations mean new plant-based products are becoming available, and the growing number of vegans and flexitarians is creating a bulging market for plant-based meat replicas.

In the UK, most fast-food chains are now offering at least one vegan dish. But some chains are leading the way by offering something most vegan consumers are yet to see in restaurants: choice.

Subway, for example, has four vegan sandwiches on its menu now, plus two limited-release subs it launched for Veganuary. And, because it has the basics covered, it’s been able to get more creative, too: one of the new sandwiches is a plant-based alternative to chicken tikka. And Starbucks has launched a plant-based tuna sandwich in the UK.

It’s a far cry from the limp salads and half-hearted bean burgers vegans have been left with for years.

These factors are essentially creating a loop. The more demand there is for plant-based food, the more lucrative the market is for restaurants – and as a result, they’re offering more vegan options at lower prices, which in turn tempts more people to try out the meals.

So expect to see more and more plant-based dishes popping up on restaurant menus. And expect them to get cheaper and tastier, too.

1 Stock To Buy, 1 To Dump When Markets Open: Caterpillar, Snap